Blockchain is a data structure that makes it possible to create a digital ledger of transactions and share it among a distributed network of computers. Blockchain technology uses cryptography which allows each participant on a network to manipulate the ledger in a secure way without the need for a central authority.

The benefits of blockchain technology were first realised in the financial services industry, where trades are often verified by a central clearinghouse that maintains its own ledger. This verification process can take days to settle a transaction and would normally involve a fee. Blockchain eliminates the need for that clearinghouse by giving each bank in the network its own copy of the ledger, this would allow transactions to be approved automatically in seconds or minutes, significantly cutting costs and boosting efficiency.

According to a recent study by IBM, it’s not just the financial services sector that will see the benefits of blockchain. Supply chains, IoT, risk management, digital rights management and healthcare are also areas that are poised for a dramatic change due to blockchain technology.

We reached out to some of the top influencers on our list to ask them for their views on blockchain. We spoke to Tim O’Reilly (#1), Jeremiah Owyang (#3), Warren Whitlock (#6), John Rampton (#11) and R “Ray” Wang (#17). Be sure to follow them to stay up to date on the best content and resources on Blockchain.

“In technology, as in human affairs, much of what we take for granted as “truth,” “reality,” and “the way things work” turns out to have been only one of many possibilities. And every once in a while, a technology comes along that redraws the map of what is possible, and reshapes the fundamental assumptions of all future applications. The blockchain has the potential to be one of those technologies. “

“Blockchain and other P2P networks shift the power from centralized institutions to the people who use it. While nascent, risky, and historically volatile, blockchain offers a possibility of streamlining commerce through open networks. We’re still evaluating the impact this will have to other industries beyond financial services –but rest assured, if it takes off –it will have global commerce impacts.”

“Bitcoin gets all the press but blockchain is the real success story. Blockchain goes beyond encryption and keep data on a distributed peep network and available fast. Beyond money transfers, blockchain allow for development of secure and instant access that can help reduce friction. No more lost paperwork for real time transactions like bills of lading, transit docs and records.  Ledgers kept in a blockchain database will help us reduce friction and handle big data from the internet of things. Speeding up the pace of innovation.”

John Rampton – Founder and CEO of Due

“Blockchain is the future, we all know it but really need to work together to make it happen. As individuals we’ll never pass legislation and laws in our country. But working together as a team we can help create, enforce and enable worldwide laws that will protect people. The future of blockchain is bright as long as we’re all in this together creating and working as one fluent chain.”

“Blockchain provides the digital DNA required for the orchestration of trust. Smart services from IOT, contracts, money, value exchanges, customer journeys, and work flows leverage distributed ledger technologies to deliver micro services. While bitcoin’s permission less approach is what’s popular today, the future of enterprises will require permission based approaches with centralized control.  The efficiencies from one single source of validated truth and the digital possibilities are why this technology is so exciting.”

We were interested in seeing which topics were most popular among the top blockchain influencers, so we analysed their tweets and blogs from 1st January – 12th July 2016 and counted mentions of various topics associated with blockchain, which we then used to create a topic share of voice chart. 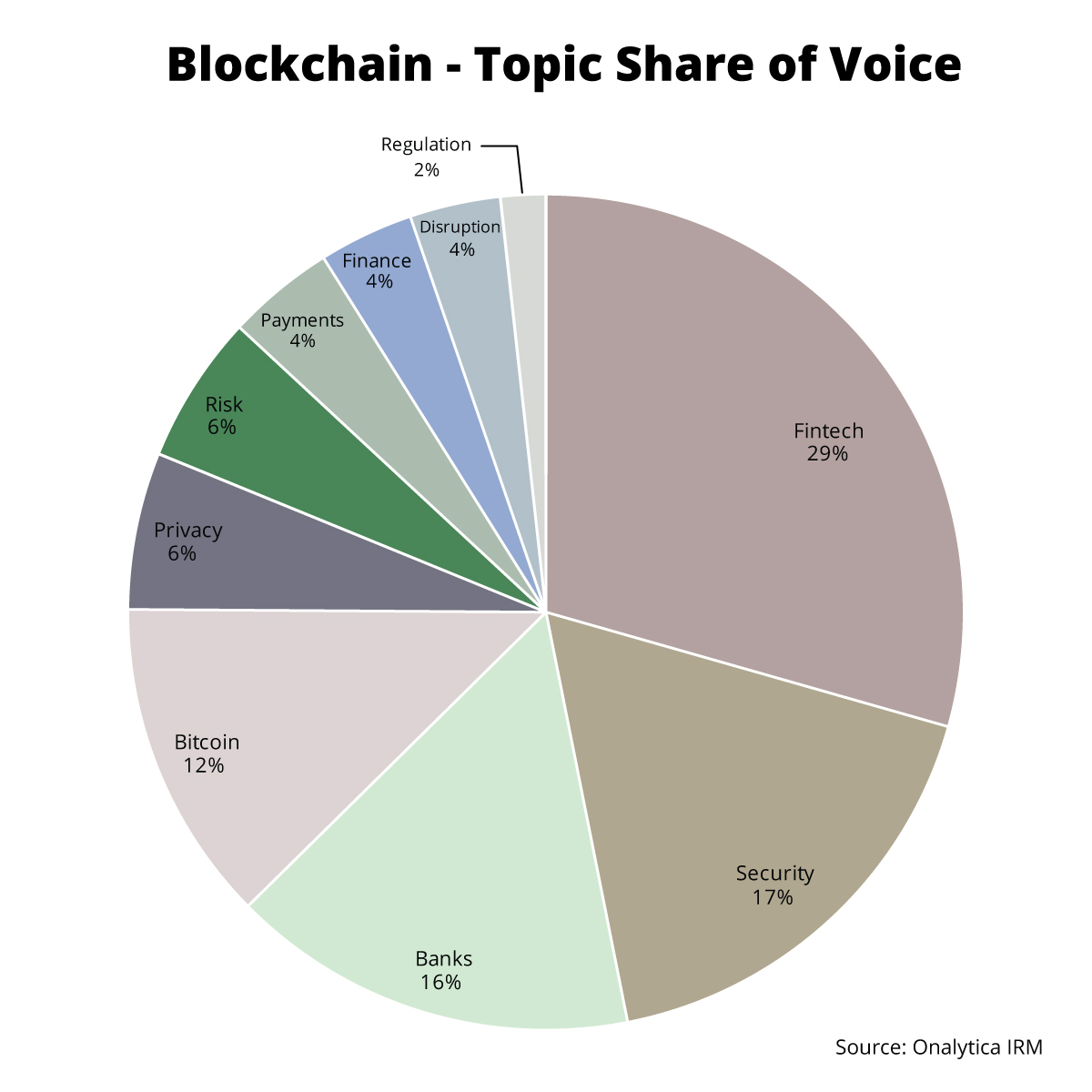 We were very interested in seeing which blockchain influencers and brands were leading the online discussion, so we analysed  tweets over the last 6 months mentioning the keywords blockchain OR “block chain”. We then identified the top 100 most influential brands and individuals leading the discussion on Twitter. What we discovered was a very engaged community, with much discussion between individuals and brands. Below you can see a network map of the online conversation with the number 1 brand The Economist at the centre. This map was created with our Influencer Relationship Management software (IRM). Be sure to click on the map to enjoy the full size network diagram in greater detail. 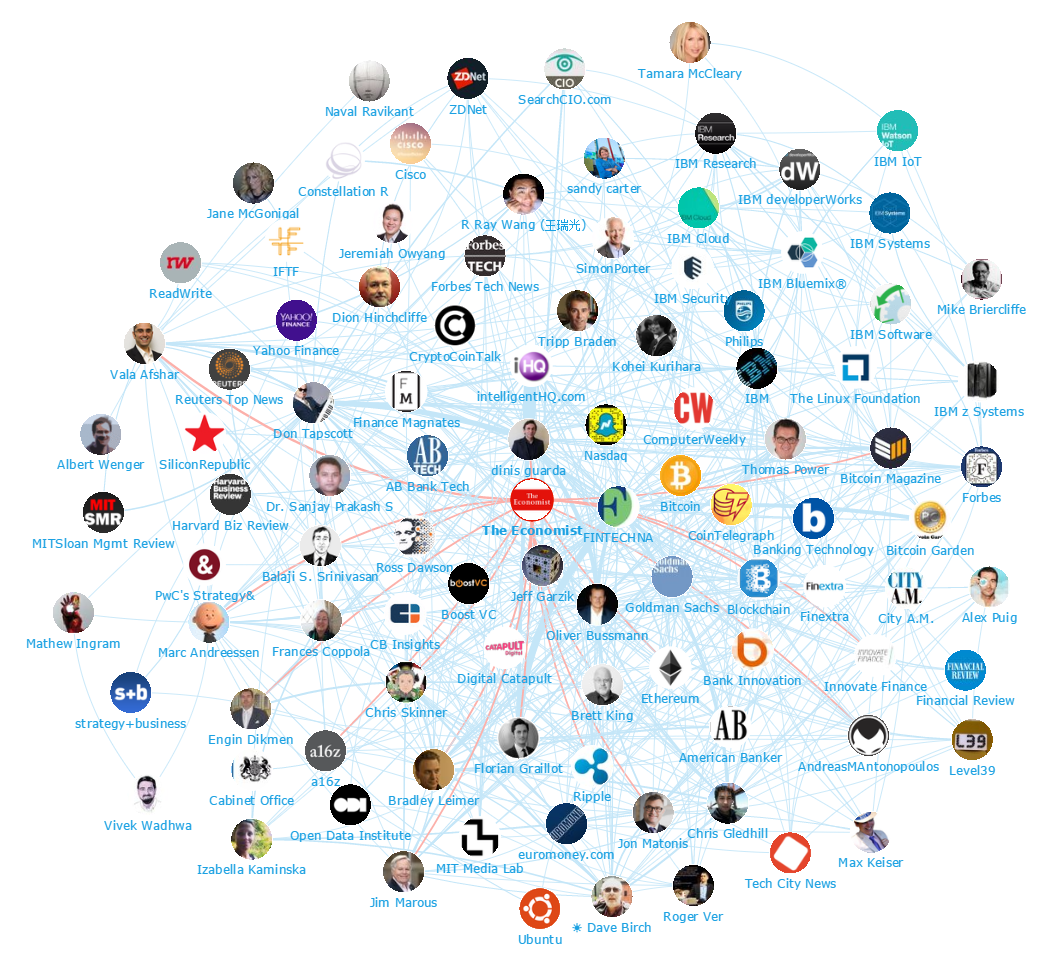 Below you can see another network map created with our Influencer Relationship Management software (IRM) showing the number 1 influencer Tim O’Reilly at the centre and all the conversations to and from the influencers in his field. If you are interested in learning more about identifying, managing and engaging with influencers click here to get in touch! 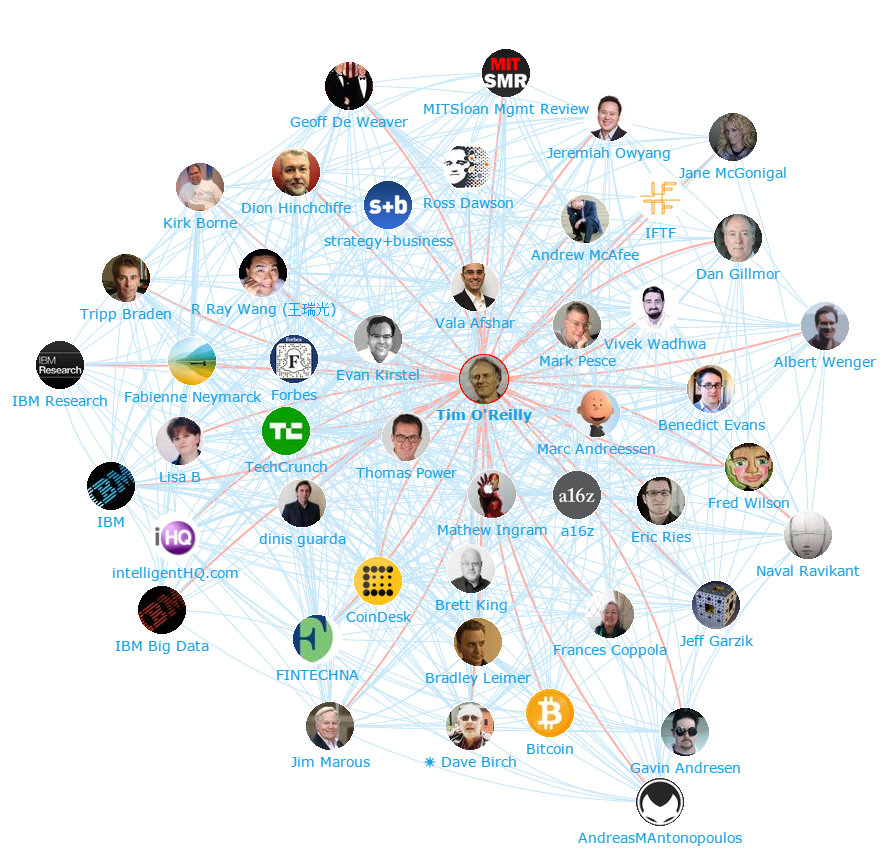 We looked at all the individuals engaging on Twitter to bring you a list of the top influencers in blockchain. Below is the top 50, if you want to see who ranks from 50-100 be sure to download the full report by clicking the download button below.

In the top 100 brands we can find a great selection of industry resources such as The Economist, TechCrunch and Forbes as well as industry heavyweights like Cisco, Goldman Sachs and IBM. Below is the top 50, be sure to download the report to get the full top 100 list, and see who are most the influential brands in blockchain.

Disclaimer: As ever with these lists, it must be stressed that the ranking is by no means a definitive measurement of influence, as there is no such thing. The brands and individuals listed are undoubtedly influential when it comes to driving discussion around blockchain.