This Sunday 7th February 2016 sees one of the biggest sporting events in the world take place, the Super Bowl. The Denver Broncos will take on the Carolina Panthers at the Levi’s Stadium, in Santa Clara, California. This year will be even more special as it’s also the 50th edition of the Super Bowl.

The popularity of American Football and the NFL in the UK has grown significantly over the past few years and now sells out national football stadiums on a consistent basis. Since 2007, more than half of the league’s 32 teams have travelled to London to play, and the sport’s governing body says it “fundamentally believes” there will be a permanent franchise there by 2022.

We were interested in finding out who are the key influencers driving attention in the run up to Sunday’s big game, so we identified and categorized key influencers around the topic of NFL and analysed their Twitter data to see who has the biggest share of voice in the UK on the topic of the Super Bowl. 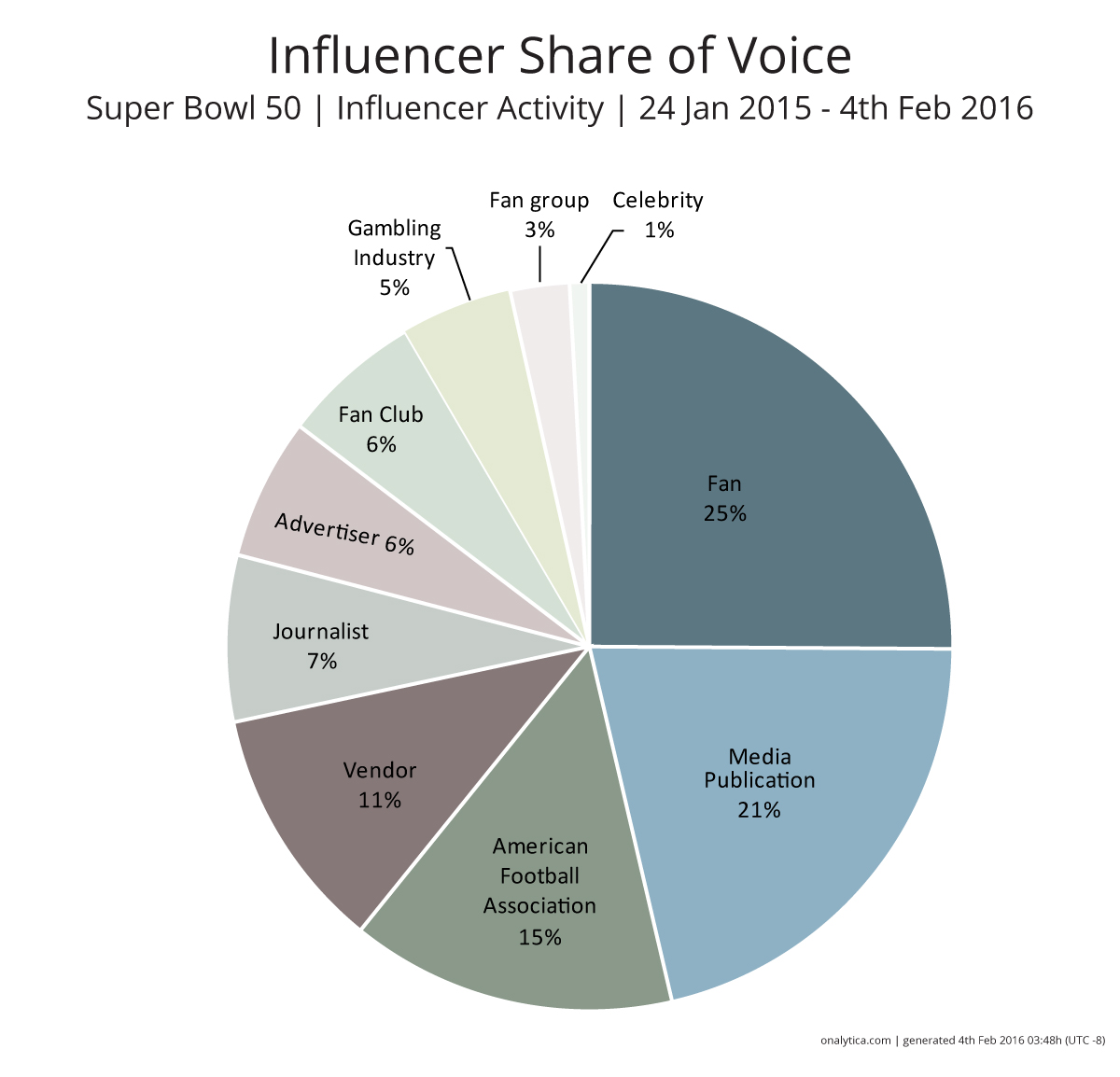 Out of the 400+ NFL UK influencers identified, we were keen to see who ranked in the top 50 in the run up to the big game. It’s interesting to note media publications driving the most engagement so far are The Guardian, Sky, The Evening Standard, and 5 Live, as well as presenters such as Darren Fletcher for BT Sport. Gambling organisations such as Coral, bet365 and William Hill also feature quite highly. Out of the celebrities, Vernon Kay is leading the discussion, and out of the fans GabeUKSaintsFan and NFLGirlUK are igniting conversations.

Advertising at the Super Bowl is taken very seriously, with some ads being compared to watching a movie premiere at Sundance Film Festival, but for as much as $5 million a pop for one 30 second slot, advertisers have a very small window to sway their audience. That’s why modern day Super Bowl advertising means more brands delivering integrated multi-platform campaigns, rather than just an ad. We were keen to learn who out of the Super Bowl advertisers have had the biggest share of voice in the run up to Sunday’s game. So we analysed their recent tweets to produce a top 10 advertisers share of voice: 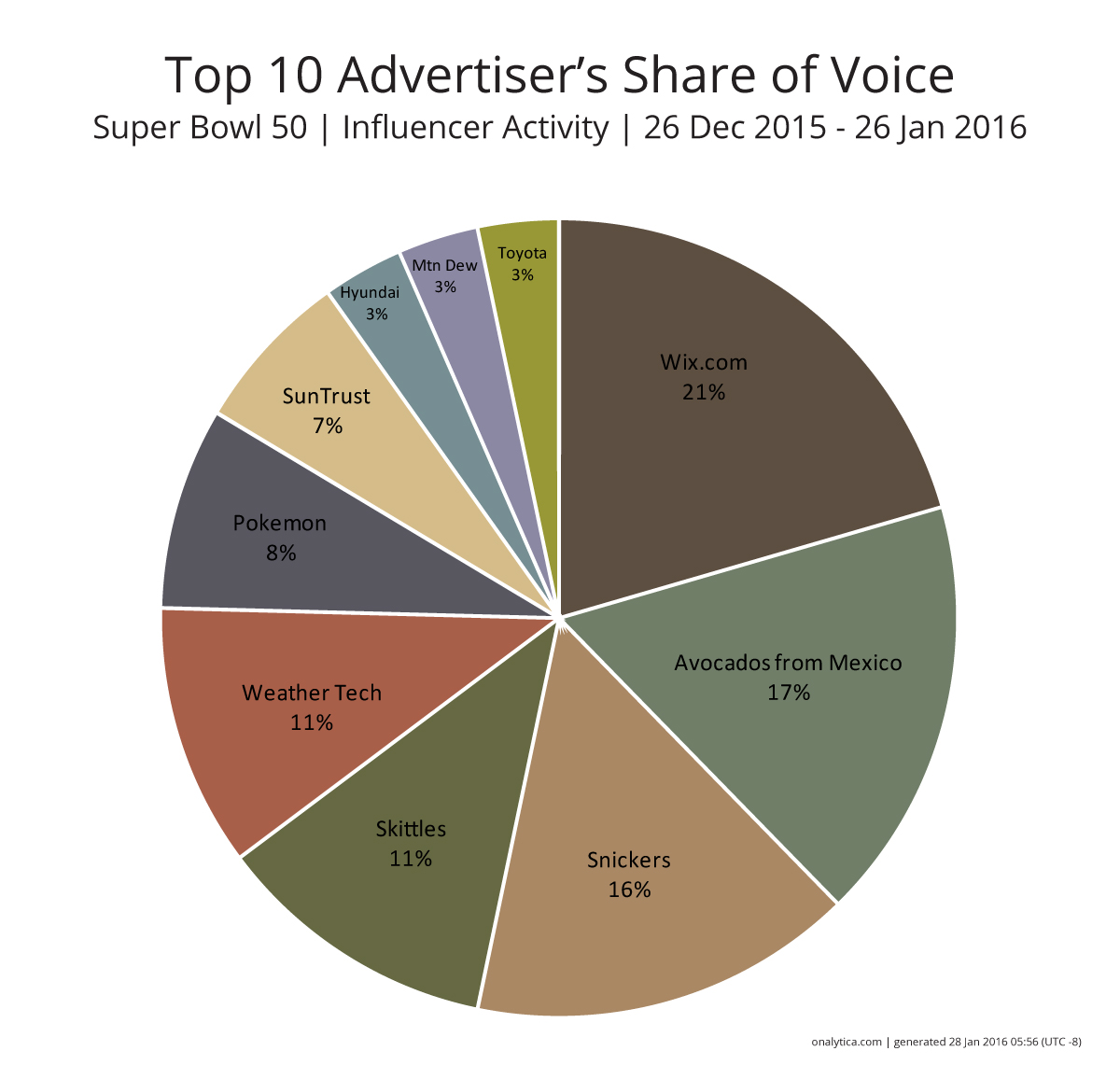 Look out for our full analysis next week where we will be analysing the global influencers who drove the most engagement at the Super Bowl as well as looking more closely at how the advertisers did during the game.

REQUEST A FREE DEMO
Disclaimer: As ever with these lists, it must be stressed that the ranking is by no means a definitive measurement of influence, as there is no such thing. The brands and individuals listed are undoubtedly influential when it comes to driving discussion in the cloud debate.
The PageRank based methodology we use to extract influencers on a particular topic takes into account the number and quality of contextual references that a user receives. These calculations are independent of a user’s number of followers, but we do filter our lists based on how much a user is engaged in the conversation and the influence they drive through their networks.