Hanover and Onalytica were interested to analyse the interactions between influencers and online media when it came to the health policy debate.

The A&E “crisis” at the start of January 2015 appeared to offer the perfect case study to look at how the debate was driven online, how it was shaped by (and how it influenced) traditional media, and who the most important influencers were, as well as identifying the connections that existed between different influencers.

For example, online debate began to spike by 6th January, which was before the national newspaper front pages led with A&E stories on 7th January. However, whilst national newspaper front pages on 8th January led with the Charlie Hebdo Paris shootings of the previous day, online activity around A&E stories (although falling) continued at pre-spike levels for sometime, and continued to be driven by the online presence of traditional print and broadcast media outlets. Moreover and politically-speaking, much of the online debate was led from the Left, as can be seen by looking at the most vocal influencers.

We’ve included a network map below which allows anybody to better understand and analyse the importance of key influencer in the A&E crisis online debate. Click on the map to view a vector file and see all the detail of the online debate. 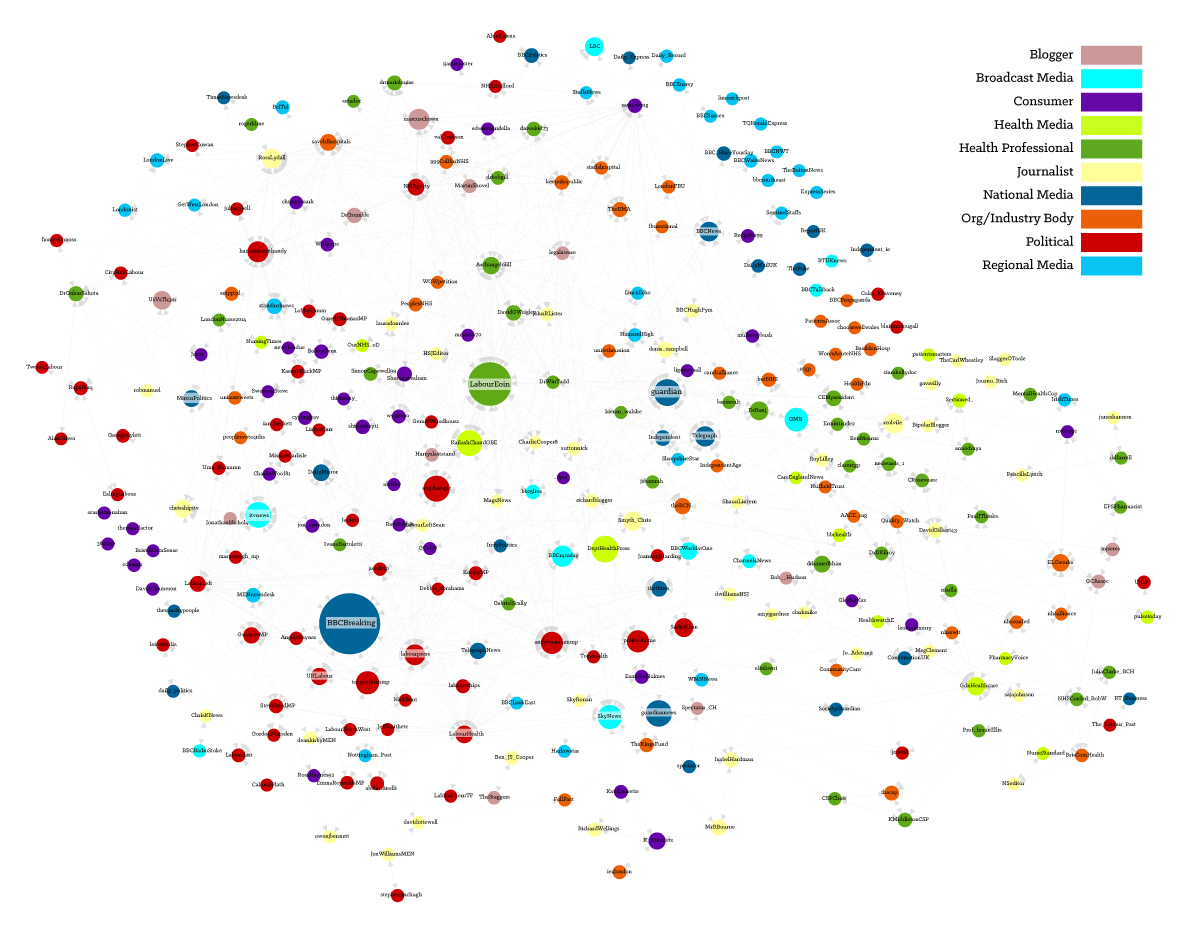 Onalytica and Hanover then analysed the debate amongst the top 1350 UK influencers to look at whether the market trend was consistent with key opinion formers.

These 1350 influencers consisted of the top 500 UK influencers driving most engagement on Twitter in the A&E “crisis” debate on 1-10th January 2015 and known key opinion leaders in healthcare.

These influencers have a disproportionate impact on the healthcare sector as they are far more influential than the average consumer. Analysis on this sample represents real signal as to where the debate is moving and the resulting trends and potential implications.

These influencers & stakeholders were then segmented into Bloggers, Campaign Groups, General Public, Government & Political, Health Media, National Media, NHS Org/Professionals, Org/Industry Bodies and Regional Media to assess the relative impact of each of the groups upon the main issues. You can find the top 50 influencers just below:

Feel free to download the full presentation of the social analysis on the health policy debate between influencers and traditional media.