The Music Industry is evolving and 2015 has seen some big developments. We now have the biggest companies in the world fighting it out to offer us the best on-demand streaming services, with access to millions of songs for a monthly subscription, or even for free if you don’t mind listening to ads.

The tide is turning, but it hasn’t exactly been plain sailing. Spotify, which was recently valued at $8.53 billion, has been at the centre of much controversy and criticism over how little of the revenue it generates actually goes to the songwriters. In opposition to this and in direct competition with Spotify, we saw the launch of Tidal in March 2015, the first major artist-owned service whose aim is to change the current financial model of music streaming by paying higher royalties to artists and songwriters. Its unique selling point is the ability to stream CD quality music and HD music videos, as well as feature exclusive content.

Google Play launched back in 2012 has been steadily building up an army of followers, but on June 30th 2015 we have the big one that everyone’s been waiting for, Apple Music. Apple has been a dominant force in the Music Industry ever since the launch of the iPod and iTunes back in 2001. The new Apple Music combines a streaming service with Apple Radio, a live 24 hour radio station with a roster of world famous DJ’s. As with Spotify however, we are seeing more controversy as Apple is being investigated to see if it has pressured or conspired with record labels to withdraw support for non-Apple services.

Whether you are for or against streaming, this is the future of how we listen to music and it’s here to stay. An estimated 41 million people paid for music subscription services in 2014, up 500% from 2010. Warner Music Group’s CEO Stephen Cooper revealed that in the first quarter of 2015 they saw a 33% increase in streaming income, which means they now make more money from streams than they do from downloads. 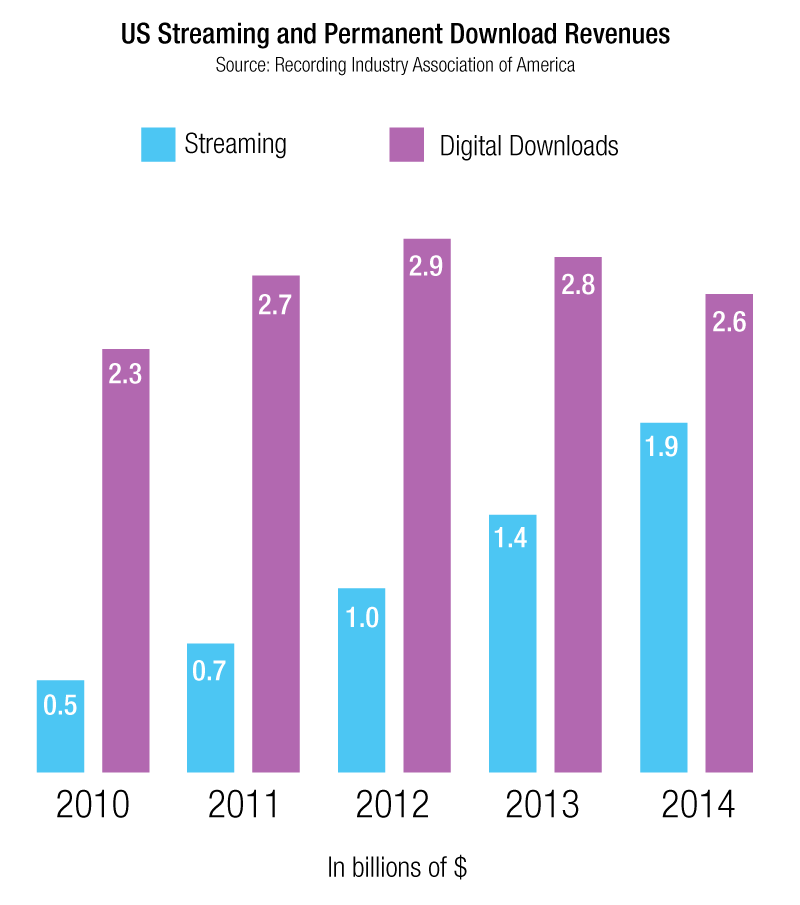 When you consider that the music industry had been in decline for years due to the threat of piracy and illegal file sharing, the fact that revenue from streaming is growing can only be a good thing. It was only in 2012 that the sales of digital music increased enough to offset the decline in CD sales. Record companies have adapted their business model to incorporate digital transformation and other sectors of the industry have had to do the same. Music magazines have seen a massive drop in circulation, many magazines now offer a weekly digital edition for your iPad, iPhone or Kindle in exchange for a monthly subscription. This has enabled them to survive and meet increased demand for a digital over a physical product.

Another way the industry has adapted is in the live music sector, with more and more concerts and festivals on offer. The price of tickets has also grown significantly (total box office takings for live music events in the UK grew by 26 per cent in 2013). On top of this vinyl has had a resurgence among purists, with sales in the UK hitting an 18 year high with a 54% increase in 2014. Revenues from synchronisation deals — the use of music in TV adverts, films and brand partnerships was also up 8.4% in 2014.

When you put all this together with the increase in revenue due to streaming services, it makes for positive reading, so much so that in the UK the music sector outperformed the rest of the British economy by generating 9% growth from £3.5Bn to £3.8Bn in 2013. This is a trend we have seen throughout most of Europe, with Germany and France in particular seeing better than average performances. Worldwide the Music Industry’s digital revenues grew by 6.9% in 2014 to $6.9 billion.

We wanted to see who the key players are in this new landscape, so we analysed over half a million tweets to gauge which brands are driving the most discussion on social media, which we then added together with qualitative research to provide a top 100 list.

In our brand analysis it was not surprising finding the handles from Apple Music, iTunes, Google Play and Spotify in the top 10. Also featuring highly were the music publications Billboard, Rolling Stone and NME. Record labels such as Universal Music and Sony Music also feature highly as well as the TV stations MTV and E!

Be sure to grab the full top 100 report to see where brands like Tidal, Gigwise, SXSW, BET, BBC6 Music and many more rank.

Disclaimer: As ever with these lists, it must be stressed that the ranking is by no means a definitive measurement of influence, as there is no such thing. The brands listed are undoubtedly influential when it comes to driving discussion in the music industry.

The PageRank based methodology we use to extract influencers on a particular topic takes into account the number and quality of contextual references that a user receives. These calculations are independent of a user’s number of followers, but we do filter our lists based on how much a user is engaged in the conversation and the influence they drive through their networks.