In the light of International Women’s Day we have decided to take the opportunity to champion some of the amazing women here at Onalytica throughout the month of March. We’ve carefully selected women who have risen through the ranks but also come from an array of teams, roles and backgrounds.

Alicia Russell is the VP of Global Marketing. Alicia has been with the company for nearly 6 years, she started out as Sales & Marketing Trainee and ultimately became the VP of Marketing in late 2020. 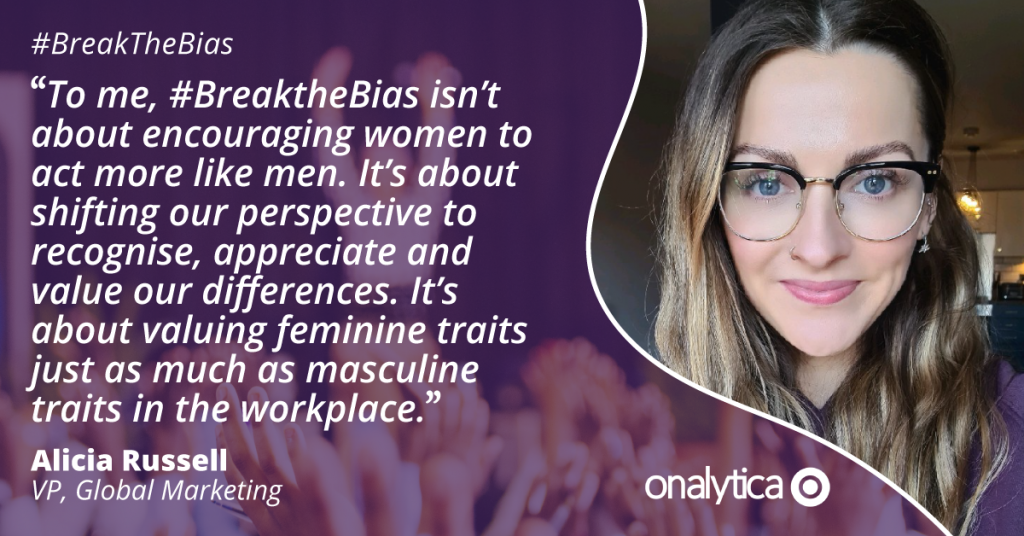 It’s incredibly important to celebrate how far we’ve come as women, but to also raise awareness and have conversations around what more needs to happen, as we’re nowhere near done. I see it as a global virtual event where women and allies can come together and have conversations on what it’s like to be a woman in a man’s world, but the work has to continue outside of International Women’s Day if we’re to make progress.

Women are forever in a lose-lose situation; damned if they do, damned if they don’t. If a woman is kind and compassionate, she’s too soft and not cut out for leadership. If she’s strong willed and opinionated, she’s brash, unapproachable, and unlikable. Different story for a man, however. How many boys do you know to be called bossy or a diva? (By the way, if you were ever called bossy or a diva as a young girl, I hope you’re using your skills to be a great leader! #BossyDivasUnite)

To me, #BreaktheBias isn’t about encouraging women to act more like men. It’s about shifting our perspective to recognise, appreciate and value our differences. It’s about valuing feminine traits just as much as masculine traits in the workplace.

Creativity & empathy are “feminine” traits, and allow for being obsessed with the customer and creating beautifully designed products that truly understand and serve the user. On the other hand, more “masculine” traits that allow for risk raking, decision making and pragmatism are equally as valuable. They’re just different. But it’s also important to recognise that feminine traits aren’t exclusive to women and masculine traits aren’t exclusive to men.

In essence, #BreaktheBias is a mission to bring down the patriarchy that holds both men and women prisoners to the outdated societal expectation on gender roles.

I feel very fortunate to have not experienced any major discrimination in my time, but that’s because I choose my circles very carefully. That said, I was once turned down for a job, because they thought I was “too nice” for their “lad-ish office”. But I don’t see that as a barrier, I see that as a lucky escape and their loss.

My biggest barrier has been my own conditioning. Self-limiting beliefs of what I can and can’t do, because I’m a woman. I’ve never related to two words more than I relate to “imposter syndrome”. There’s a few stats circling online that women only apply for jobs that they’re 100% qualified for, whereas a man will apply if he can do half the job spec. There’s a lot of truth in this.

Ultimately, it comes down to wanting to do a good job and not feel like you’re out of your depth. But if you’re to ever grow and develop, you need to challenge yourself. If you’re only going for things you can already do, you’re putting barriers up for yourself.

The same can be said for asking for promotions and pay rises – women are much, much worse at this. Again, I think it comes down to not valuing our worth and perhaps wanting to avoid conflict. But while the power is in our hands to force ourselves out of our comfort zones, men need to do more to champion women to help them develop their careers.

Two things come to mind here, one being something that was said direct to me and another a piece of advice I heard on a podcast.

First bit of advice came from my dad. When I was younger, my dad and I used to bang heads a lot because I was naturally a very inquisitive, out-spoken and opinionated young girl. I never just accepted information, I always wanted to challenge and understand it. Which he wasn’t used to and used to struggle with, understandably due to generational differences. But as I got older, he told me that this is one of the best things about me and to never change. To never stop fighting for what I believe in and standing up to injustice. The bottom line with this, is that we’re all unique and we all have something about us that is what makes us amazing. Don’t change it. And certainly don’t ever change it for a man’s sake.

Second bit of advice, is when in doubt, ask yourself “what would a white man do?”. Sometimes you have to fake it until you make it. You’ve got to train your brain to think differently. If a white man would go for an opportunity that you think you’re under-qualified for, you bloody go for it and believe in yourself.

There’s two sides to this. What women can do to take control over their careers and what needs to happen around them.

I’m going to start with allies and the systemic changes. One of the most powerful things is representation. If young girls are to ever believe that they can, they need to see women that have. We need to actively get more women into positions of leadership and into STEM roles so that we can have a trickle-down effect to the next generation of women. Outside of diversity being the right thing to do, it makes commercial sense too as diverse teams make better products. And this doesn’t just start and end with quotas. Quotas feel like a tick box that a lot of businesses do begrudgingly because their perspectives are tainted by their unconscious gender bias. This comes back to changing our perspectives on gender roles and the traits we value most in business that I touch on in question 2.

Now for allies. Being an ally is so much more than just “supporting” feminism. You need to be an active feminist. And again, feminism isn’t just about being “pro women”, it’s about equality across the board and bringing down the patriarchy.

As an ally, it is your job to use your privilege to champion women. Stand up to injustices and discriminations. Silence is compliance – stand up to inappropriate language and jokes in the boardroom and in your WhatsApp group with your mates. Encourage women to go for promotions and sponsor them if you can. Have open discussions on salary and insist on fair pay in your team.

Women – look for mentors and sponsors of both genders. Learn from women who have been there, done that and got the t-shirt who can empathise and give you real, meaningful advice. Look for men that can help you find ways to play the game. But most of all, just believe in yourself and take the risks. Remember, what would a white man do?

It’s beyond important. How can companies and their products serve society if their teams don’t reflect what society looks like? Diverse teams make better decisions and products. How can a board of white men make decisions on topics that impact people other than white men?

But it doesn’t stop at diversity. Workplaces also need to be inclusive if we’re to get the best out of diverse teams. Being inclusive means that women will never have to choose between their careers and their family. Just like men have never had to choose or compromise.

Ok, there’s lots, but let me focus on a few:

Natacha Oceane – one of the very few lifestyle “influencers” I follow & watch as she creates high quality, educational and inspiring content. She recently ran non-stop for 24 hours and covered 90 miles. If that’s not inspiring, I don’t know what is. Plus, she seems like my kind of person.

My mum’s mum – she died when I was 18 and I wish I could sit down and ask her all the questions that I now have as a 28 year old. She came from a totally different time but was a total boss in her own way. Any woman that grew up in an orphanage, had 6 kids, a successful marriage and a career is a boss in my book.

Past me – bit of a rogue choice, but I’d love to be able to give past me a hug and tell her how amazing she is and to believe in herself a lot more. Past me would be so proud of me today. This would be really weird though.

I’ve got two on the feminism side (on Instagram) and two on the marketing side.

@movewithtara – an incredibly smart feminist by day and talented pole dancer by night. She regularly does polls (pardon the pun) relating to feminism on her Instagram stories and shares and unpicks responses in a very well-balanced way. Who knew women could be so multifaceted?

@Oenone – she has a great podcast called “adulting” and is super passionate about intersectional feminism – through the lens of her own self-professed privilege. She’s also recently branched out into writing and comedy which just sets such a great example of going “eff it” to anything you once deemed off limits.

Danielle Guzman – another super smart and inspirational woman with a great marketing career achieved around her family. Her approach to business and leadership holds empathy at its centre.

Mel Stanley – I mentioned earlier that personal branding is really something aspiring marketers should focus on and she’s an expert at this – particularly for women.