In the light of International Women’s Day on Tuesday, March 8th we have decided to take the opportunity to champion some of the amazing women here at Onalytica throughout the month of March. We’ve carefully selected women who have risen through the ranks but also come from an array of teams, roles and backgrounds.

Andreea Moldovan is the Lead Data Scientist and has been at Onalytica for almost 12 years. She got started at the company as a Quantitative Models Researcher. 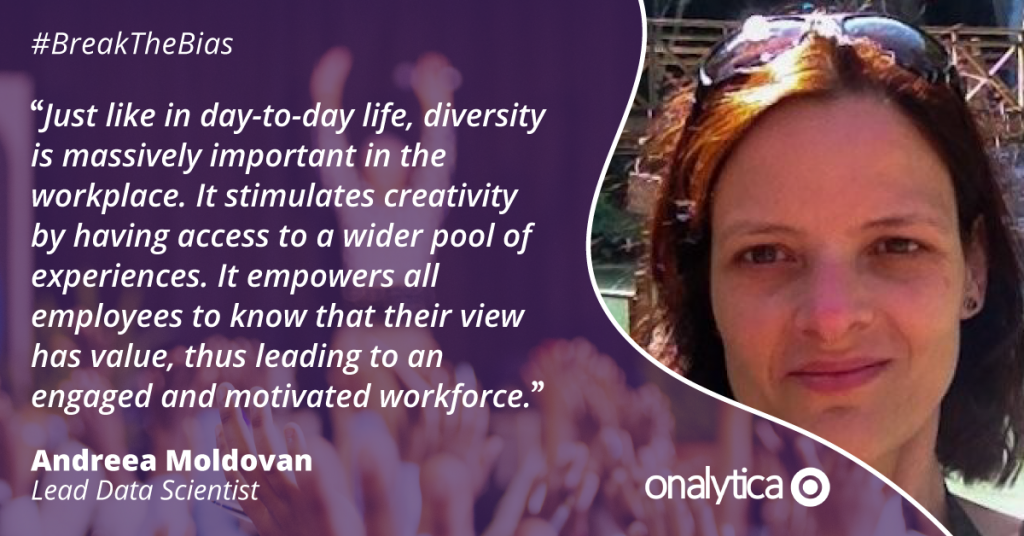 I consider myself privileged to live in Western Europe and realise that we have made good progress towards achieving gender equality. There is still much to be done to remove stereotypes and discrimination that women are facing globally, so it’s important to put the spotlight on these issues, but also celebrate the milestones and achievements of women from all walks of life.

It means realising there are no male or female traits, rather human traits. I think a difference in character and/or brain based on sex is a cultural conditioning. Bias is inherent in all of us, so the first step is acknowledging it, then we should fight it through information and education.

I think I was very fortunate to be supported throughout all stages of my career until now. Choosing a career in tech was due to growing up in an Eastern European country where women were encouraged to choose a technical career path just as much as men were.

Do something you enjoy and be open to lifelong learning.

Through increased investment and resources into education and the community. For example, initiatives such as #womenintech are very important to support women getting into the Tech industry.

Commitment, action and accountability from government and organisations are needed. I support more transparency into gender and diversity pay gap and quotas in boardrooms. Initial steps have been taken by requiring annual reporting from larger companies, but I think legislation should be considered.

A few of my friends have had to stall their career and therefore their access to positions of leadership once they became mothers. We need more support for working mums through less discrimination when returning to work, more affordable childcare and flexible working.

Just like in day-to-day life, diversity is massively important in the workplace. It stimulates creativity by having access to a wider pool of experiences. It empowers all employees to know that their view has value, thus leading to an engaged and motivated workforce.

Always believe in yourself. Life has its challenges but your determination and perseverance will be your strength. And embrace lifelong learning and developing.

Ada Lovelace – She was a mathematician and the first computer programmer. It would be interesting to hear the struggles she had faced as a woman researcher in the 19th century.

Angela Merkel – She thrived in the male dominated world of politics through honesty, moral integrity and determination.

Nina Simone – I love her music and admire the work she’s done for civil and women’s rights.