In the light of International Women’s Day we have decided to take the opportunity to champion some of the amazing women here at Onalytica throughout the month of March. We’ve carefully selected women who have risen through the ranks but also come from an array of teams, roles and backgrounds.

Ann Duhneva is the Insights Manager and has been with the company for nearly 3 years now. She started her journey as a Customer Success Executive and quickly moved up into senior and leadership roles. 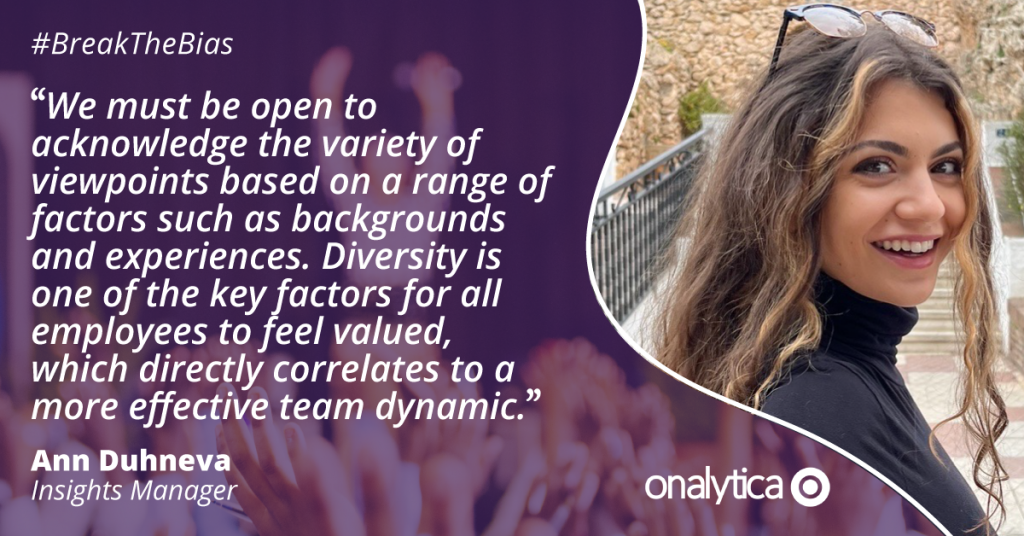 Sometime not too long ago, considering how short human history actually is, women felt the need to speak up, to have a voice and to have that voice heard. To me International Women’s Day is a moment to celebrate these brave women who are at the foundation of how our modern society is shaped as well as the men who support them. I think it’s important to acknowledge the successes of women on a global scale socially, economically, culturally and politically, and it is also a day to raise awareness and reflect on the inequalities that unfortunately still exist in the world.

#BreaktheBias signifies the need for recognition on the negative impact bias can bring and encouragement to champion the elimination of discrimination in the workplace. In fact, I think we should look further than just gender-based bias and realise that we’ve still got a long way to go to achieve equality in many other aspects of the workplace as well.

My go-to solution for overcoming such challenges is to always speak up. Having learnt this the hard way, it’s important to learn to speak up when something isn’t working and propose alternative solutions. It’s okay to call-out discrepancies and to ask for help. Nonetheless, it is also important to realise that this should be a reciprocal relationship where you also feel heard.

I have been very fortunate to have come from a long line of entrepreneurs and having been raised in Eastern Europe I’ve been surrounded by women in positions of leadership from a young age. Growing up, I was in fact encouraged to pursue a career in STEM where the answer to the question ‘Why?’ was always ‘Because you can!’. This has helped me develop the ‘can-do’ attitude that I hope to pass onto others.

I’d ask women to think of the role models they didn’t have when growing up and strive to be what they missed. This is how we’d create change for ourselves and move away from the stigma for future generations. Simply try to be the inspirational person you wish you had.

In order to successfully implement sustainable work environments, we must be open to acknowledge the variety of viewpoints based on a range of factors such as backgrounds and experiences. I believe diversity is one of the key factors for all employees to feel valued, which directly correlates to a more effective team dynamic.

There isn’t a single thing that a man can do that a woman can’t. With the right skills, support and mindset anything is possible. It’s all about believing in yourself and chasing those opportunities.