GMO stands for “genetically modified organism” and uses biotechnology to alter plant DNA, making certain crops resistant to pesticides and other chemicals so that farmers can more easily protect their crops from diseases and pests. Scientists make GMOs by taking the plant, and adding DNA from bacteria, virus or another plant to it. The plant structure has now been changed so it can be stronger and more resistant to disease or bugs, or benefit us by having a better taste, medicinal properties or longer shelf life. This process results in faster production of consumable and sellable food.

GMO is considered the big beast in the food health discussion, it raises sincere concerns over what they do to our body, especially toxic herbicides. The long-term effects of many synthetic substances are not known. The growing popular alternative to GMOs and chemically-treated food is buying organic. It is a popular view that the goodness and nutrients we receive from food should be natural and not tampered with. It must be stressed however that although chemicals are used on GMO seeds, GMO and chemical application to food are two separate issues. Processed meat for example can be organic from source but then chemically treated later.

GM foods are almost impossible to avoid. In the US up to 80% of processed foods are genetically modified, but they are not always clearly labelled. In 2014, Vermont became the first state to require mandatory GMO labelling, however in response to this an anti-GMO labeling bill was passed and will be introduced in the Senate soon. Dubbed the DARK act (“Deny Americans the Right-to-Know”) this law would block state GMO labeling and make it virtually impossible for the FDA to develop a national GMO labelling system. This has caused much outrage with people demanding the right to know what is in their food. Wherever you stand on the GMO vs. Organic debate, it’s important that you are allowed to make you own choices.

We reached out to some of the top influencers identified on our list to ask them for their views on the GMO vs. Organic food debate.  We spoke to the Author Jennifer Lang (#1), the founder of Kids Right to Know Rachel Parent (#3), Kevin Folta from The University of Florida (#4), the journalist Michael Gray from Common Space and The National (#7), and Tamar Haspel from The Washington Post (#11). Be sure to follow them to stay up to date on their stories! (click on the names to see their Twitter profiles)

“People don’t realize how something as beneficial as food can be used as a weapon to enslave generations…..If GMOs came in like tanks…rolling down our streets, we would take up arms. But to “secretly” slip them into a nation’s food supply and tell everyone…that they are good for you…is diabolical. And moreover, once the people become educated and ‘opt-out’ of their GMO experiment, their cries are silenced  and ignored with more corporate propaganda and political coercion. For the handful of organic farmers who fight to stay alive and afloat in the biggest  cafeteria food fight on earth,  I applaud them. Government goes to great lengths to make them jump through all these hoops, just to “prove” that their foods are organic, whereas The World Health Organization has stated that the number 1 weed killer used on GMO crops probably causes cancer and government does nothing to ban them. Our generation has one hope and one mission…..choose NON-GMO Verified foods and eat Organic. Then unseat every political candidate that chooses to vote for a corporation’s  bottom line rather than vote to save the lives of the people who elected them. Our revolution/evolution starts with our consumer dollars and ends with our votes at the polls.”

“It’s been about two decades since genetically modified crops were first commercialized in North America by a handful of profit driven chemical companies. In that time, there’s been a lot of debate about their potential environmental and health impacts, their so called “improved yields”, their contamination of Organic and non-GM crops, the corporate control that accompanies them, and their need to “feed the world.”  The truth is, GM crops have not improved yields, they’ve led to a dramatic increase in the use of pesticides,  mass production of GM Crops for animal feed and factory farming, becoming one of the top contributors to Global warming, farmers have lost their farms fighting big corporations, and we’re no closer to “feeding the world” with GMOs than we were two decades ago.  In reality, we produce enough food today to feed 9 Billion people. People go hungry because of poverty, broken distribution systems, corrupt governments, and waste, not because of lack of food.  It’s a matter of political will, not technology. Teaching people organic farming in small communities around the world, giving them control of their seed supply and access to markets will feed the world, not GMOs. By choosing Organic or Non GMO products, we are contributing to the regeneration of our earth. Our socially responsible and ethical goal, must be to leave the earth, better than we found it.”

Kevin Folta – Professor at the University of Florida

“Good agricultural technology can be organic or GMO. Our focus should be to get the best technologies to farmers and the needy so that they may produce food sustainably.”

“There shouldn’t be a debate between GMOs and organic agriculture because they ought to co-exist.  We’ve got a population of seven billion people, and every single one of them has to eat.  To feed them, and the billions slated to join them in the next couple of decades, we need to identify, and use, the best of every agricultural system on the planet.  The GMO/organic line in the sand leads nowhere. A responsible, wholesome food supply needs cooperation and collaboration. Urgently.”

“Ideally, an effective food system would be healthy, locally produced with a fair distribution of goods. The problem with genetic modification is not the science, which has many advocates, but the nature of its political economy. Dominated by giant profit hungry corporations like Monsanto, empowering GM based produce allows the roots of a debt and profit based food economy to dig deeper into an area that should be focused on human health and security. In a world of starvation, we need technological innovation. But it’s crucial that such progress is built on economic justice.”

MAPPING THE GMO VS. ORGANIC COMMUNITY

We were very interested in seeing which professionals and brands were leading the online discussion, so we analysed over 760K tweets matching the following query: #GMO OR GMO OR “Genetically Modified Organism” OR GMOs OR NoGMO OR “Organic food” OR “Organic crops” OR Monsanto OR “Genetically Modified Crops” OR “Genetically Modified” OR “GM Crops” and identified the top 100 most influential brands and individuals leading the discussion on Twitter. We discovered a very engaged community, with much discussion between individuals and brands, joining together in conversations. Below you can see a network map of the online conversation created with our Influencer Relationship Management software IRM. This map shows the #3 Influencer Rachel Parent, founder of Kids Right to Know and writer for the Huffington Post at the centre, and the conversations to and from the influencers in her field. 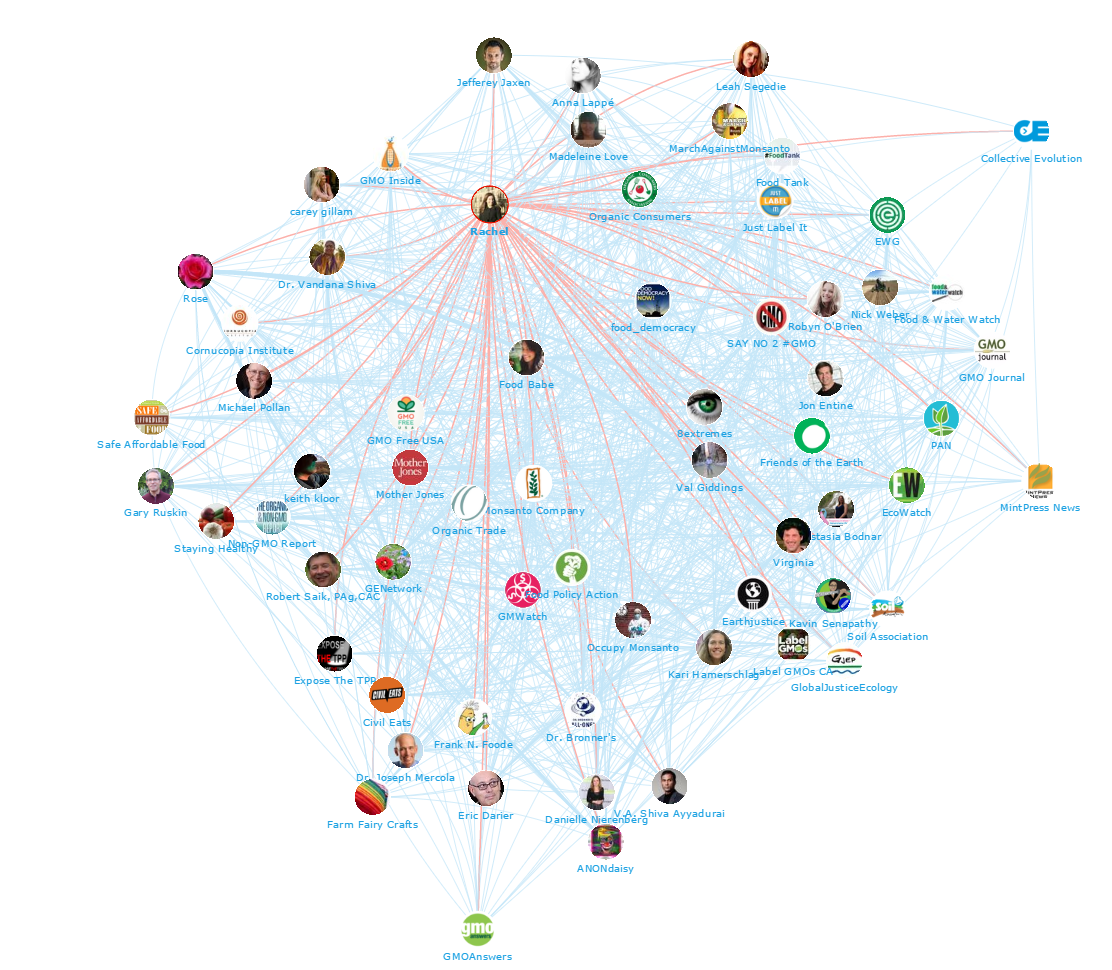 Below you can see another network map created in IRM showing the #1 brand Just Label It at the centre, and the conversations to and from the different influencers. As you can see it is a very engaged community with many conversations. If you are interested in learning more about identifying, managing and engaging with influencers click here to get in touch! 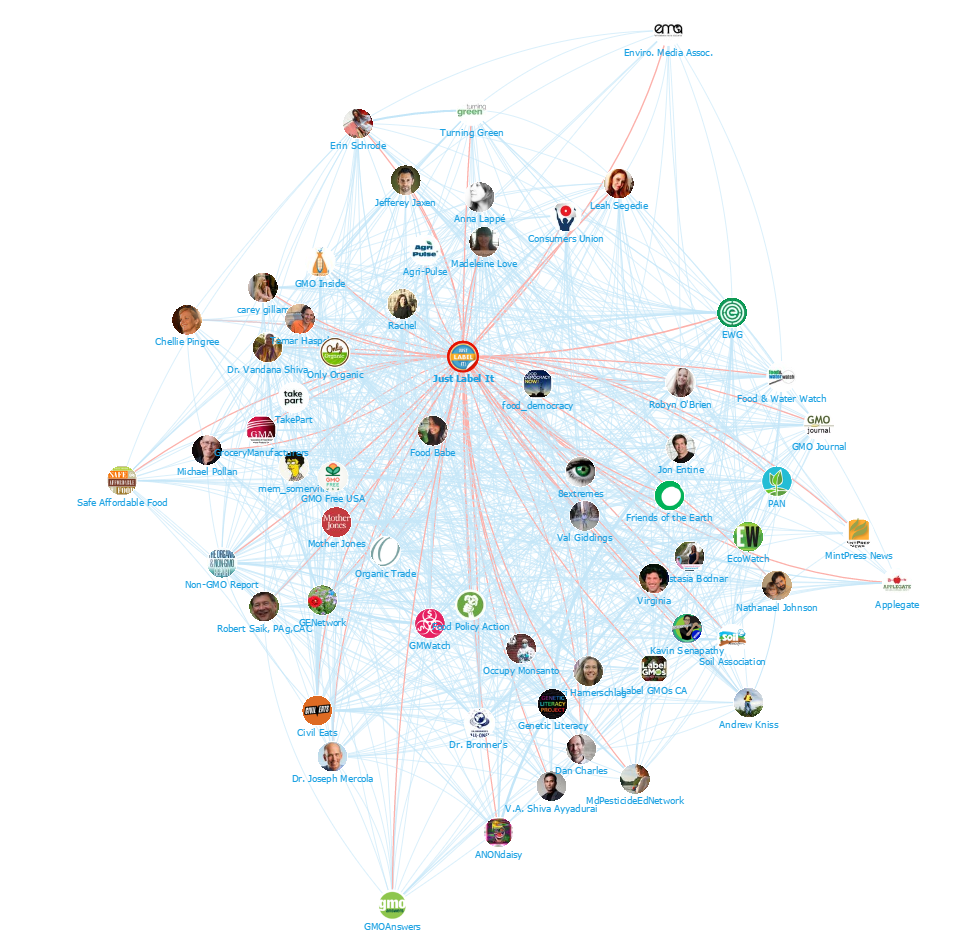 We looked at all the individuals engaging on Twitter to bring you a list of the top 100 most influential individuals in the GMO vs. Organic Food debate.

Be sure to hit the download button below to grab the full report and see who ranks beyond the top 50.

With all the discussion and resources available online, our analysis produced a great set of independent information resources and communities. Influential brands such as Just Label It, Monsanto Slate and GM Watch are leading the debate.

REQUEST A FREE DEMO
Disclaimer: As ever with these lists, it must be stressed that the ranking is by no means a definitive measurement of influence, as there is no such thing. The brands and individuals listed are undoubtedly influential when it comes to driving discussion around the GMO vs Organic food debate. The PageRank based methodology we use to extract influencers on a particular topic takes into account the number and quality of contextual references that a user receives. These calculations are independent of a user’s number of followers, but we do filter our lists based on how much a user is engaged in the conversation and the influence they drive through their networks.

Download this free report which reveals the top 100 GMO vs. organic food influencers and brands