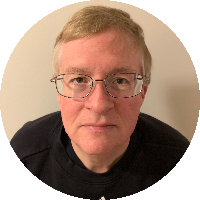 Editor in Chief at Space IT Bridge

Doug Mohney has been working in and writing about IT and satellite industries for over 20 years. His real world experience including stints at two start-ups, a commercial internet service provider that went public in 1997 for $150 million and a satellite internet broadband company that didn't.

I stumbled into an Internet startup in the early ’90s which went from 12 people above a Chinese restaurant in 1993 to a 200 person company with a $150 million IPO by 1996. It was brutal and exciting work, 10-12 hour days, 6-7 days/week initially. I had a first-hand seat to watch the commercial Internet get built — dial-up to high-speed broadband, web servers, all the infrastructure we take for granted now.
The second company was another startup combining the Internet, satellite broadband, and what is now known as edge computing. It didn’t do so well, but I ended up as a reporter at VON Magazine for a few years and into tech reporting in general, which brings me to having one foot into the IT world and the other in the space world.

What topic areas are you most passionate about?

I started reporting on space because it became a cool way to get the best seat — the press area — for rocket launches. About a decade or so away, companies started building smaller, much more affordable satellites to perform specific applications, launching lots of them in constellations to provide global coverage. First it was earth observation and specialised IoT — airplane ADS-B and ship AIS location tracking. In 2021, we’re moving into the second wave of constellations, IoT and broadband. Businesses are emerging built around lower cost spacecraft, mass production, large quantities providing a value greater than the sum of individual parts. The space industry is essentially moving from a “Glass house” mainframe-centric mentality to the cell phone/network revolution. “New Space” businesses are applications-based – it’s not about the satellite, it’s about the data and what you can do with it. The satellite is the “thing” collecting data, not driving the thought process.

Which influencers influence you within those key topics?

For space, Tory Bruno CEO of ULA Launch is a rockstar when it comes to social media and is probably the most approachable and responsible executive from any of the aerospace world, new or old.

Outside of key topics, who else influences you?

Evan Kirstel is my oldest Twitter buddy; I think I just started trolling him and he trolled right back. If we’re in the same town for a conference, there’s something good going on in the tech world. Rich Tehrani and tmcnet.com are long-time associates in the voice & broadband world. I also follow Rich Miller over at Data Center Frontier for #datacenter news and Irma Rastegayeva for #Healthtech.

I recently did two stories for Data Center Frontier about satellite broadband and they both ended up among the “Top 10” read for their respective months. With interest in satellite broadband and IoT solutions has picked up, I’m seeing more opportunities to talk about how IT and New Space fit together. Significant uptick in analyst briefings/conversations in the past 4 months.

What’s your best source of information for getting ahead of a story? What resource do you use to stay ahead of the trend?

Making phone calls, emails, doing search, trying to spot trends in industry based upon my experiences over 25 years.

Podcast/webinar – host or panel participant.
White papers – Depends on topics, compensation for time.
Speaking opportunities – Would have to discuss, depending on conference and expenses expectation.
Video interviews – Could do this, depending on topic.

What brands have you worked with?

N/A at this point. Would be happy to work with ethical brands in the tech industry.

Which non-paid activities would you be keen to take part in if the opportunity raised your profile or delivered value to your audience?

I would be keen to provide a quote for content or news article, speak or attend an event, podcast, online chat or a webinar.