The digital universe continues to expand, doubling in size every two years according to a recent report from IDC and EMC. The Internet of Things (IoT) is seen as a key driver of this expansion, with data from the ever-expanding number of connected devices, or “things” – from washing machines and microwaves to cars and thermostats – expected to account for 10% of the 44 trillion gigabyte digital universe by the year 2020.

With the advent of the IoT comes a range of both benefits and concerns – improved connectivity and communication between humans and things also brings with it increased concerns over privacy, data security and regulation. With Cisco CEO John Chambers seeing IoT as a potentially $14 trillion opportunity, navigating and understanding these discussions will be crucial for organisations seeking to increase their presence within this field and capture a slice of the market.

We took in all Twitter conversations using the hashtags #IoT and #InternetOfThings and created a network of the top stakeholders discussing the subject. This is the network diagram of the top 50 (click for a larger image): 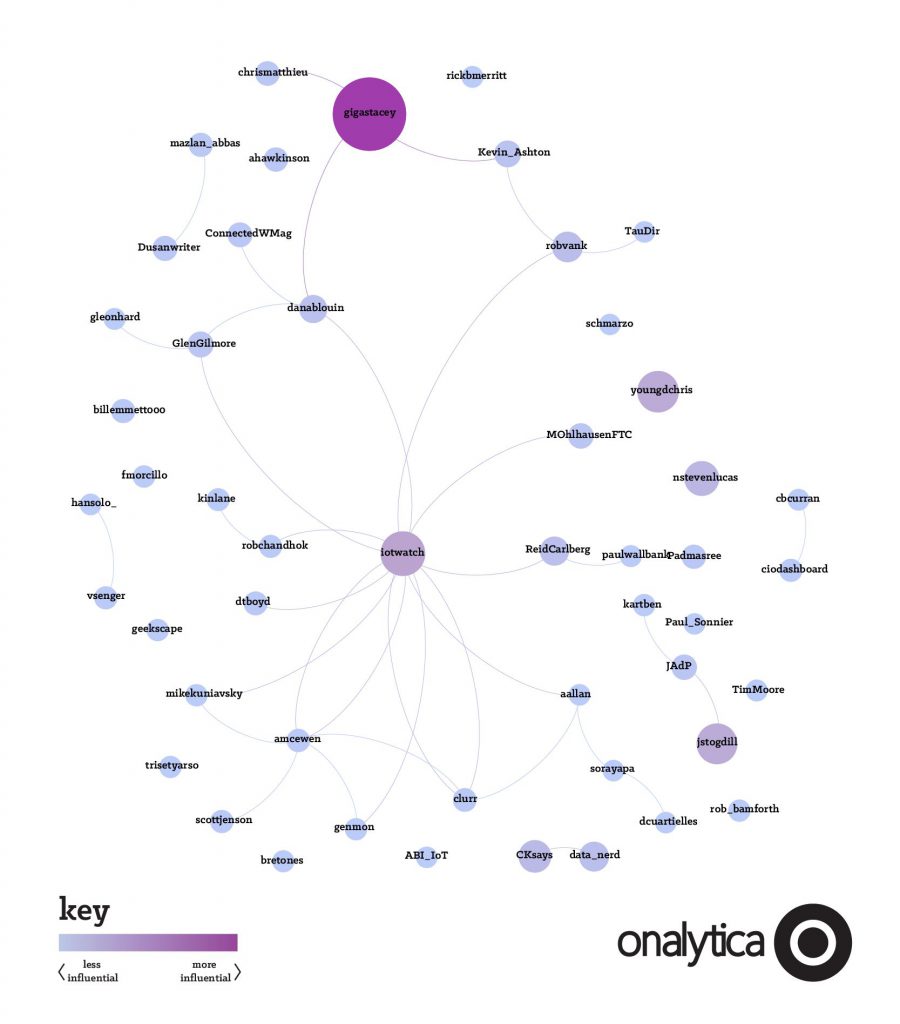 We then used PageRank analysis to identify the thought leaders at the forefront of these conversations, based on the connections and citations between the stakeholders. All stakeholders were given a value (expressed in the table below as a normalised PageRank score), which shows their relative influence within this network. Obviously, the search criteria in this case is relatively crude, and this list is by no means a definitive measure of influence, at least not necessarily in the context of your own brand’s aims – read more about our viewpoint on influence and influencer lists.

We’ve put together the entire top 100 into a download, complete with full network map showing the connections between them. Find out if you or your brand’s spokespeople have made the top 100!

Stay tuned if you’d like to get an idea of the top brands involved in the debate on Twitter, and where they sit compared with one another – we’ll be publishing that later this week.

In the meantime, click here to browse our other influencer rankings, which include top influencers and brands within sectors such as Wearable Technology, ERP and Big Data. If you want to learn more about our influencer marketing software, click here.

THE INTERNET OF THINGS 2014