CES 2016, the annual Consumer Electronics Show in Las Vegas, took place from the 6th-9th January. All the big tech brands, and a lot of new tech startups as well, were there to showcase the best technology of the future. The media, consumers and investors alike were all eager to hear what new tech gadgets and inventions would be big in 2016.

CES is always an exciting conference to watch, and people travel from far and wide to Vegas to marvel at the worlds most innovative technology. Highlights this year included futuristic concept cars, wearable tech, drones capable of carrying humans, 360 degree video, 3D printing, robots, virtual reality and even a games console for dogs!

Last year we analysed CES 2015 for our blog, and we were keen to look at it again this year. We analysed 975K+ tweets from 4th-10th January around the following query: “CES2016 OR #CES2016 CES16 OR #CES16” to see which influencers and brands were really driving engagement at CES16.

We saw a large volume of tweets leading up to and after the conference. Among the top 100 Influencers and Brands there was a big spike on 5th January in posts mentioning the official hashtags: 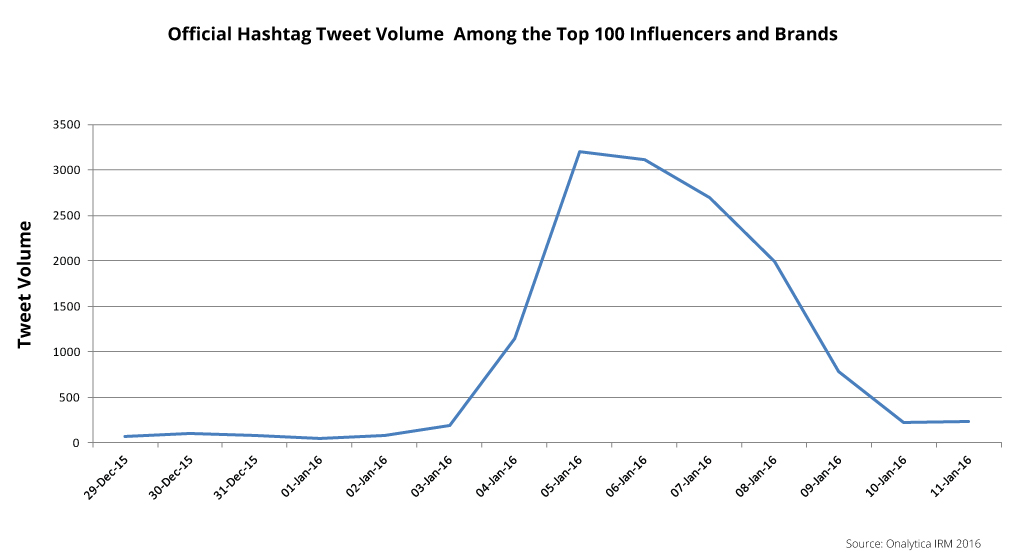 Among the most influential brands at CES 2016, the ones who tweeted the most using the official hashtags (not including the CES’s own handle) were CNET, Intel, Digital Trends, Mashable, The Verge, Endadget, TechCrunch, Lenovo, Faraday Future and Ford.

CNET had the largest share of voice, nearly double that of the next influencer Intel, closely followed by Digital Trends. Of the top 10 brands 6 were media publications and 4 were vendors. The appearance of Faraday Future and Ford Motor Company on the list represents how CES is now a very popular event for showcasing concept cars. Lenovo had a 3% share of voice, but their tweets drove a lot of engagement.

CES16 provided us with a very engaged community of influencers, with much discussion between individuals and brands joining together in conversations. Below you can see a network map of the online conversation created with our Influencer Relationship Management software (IRM). This map shows the number 1 influencer CES at the centre and the conversations to and from all the influencers in their field. Be sure to click on the map to enjoy the full size network diagram in greater detail. 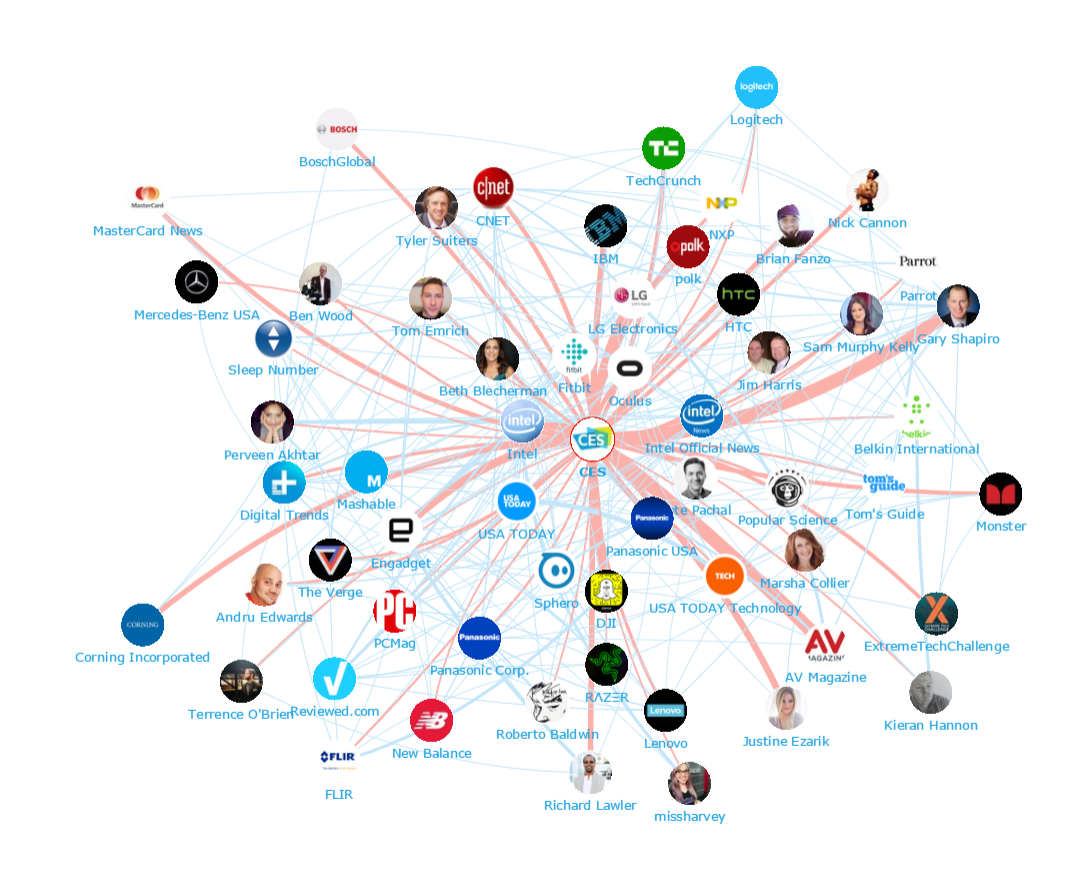 Below you can see another network map created with our Influencer Relationship Management software (IRM) showing the #2 Influencer Lance Ulanoff – the Chief Correspondent and Editor-at-Large of Mashable, at the centre and the conversations to and from the different influencers in their field. As you can see it is a very engaged community with many conversations. If you are interested in learning more about identifying, managing and engaging with influencers click here to get in touch! 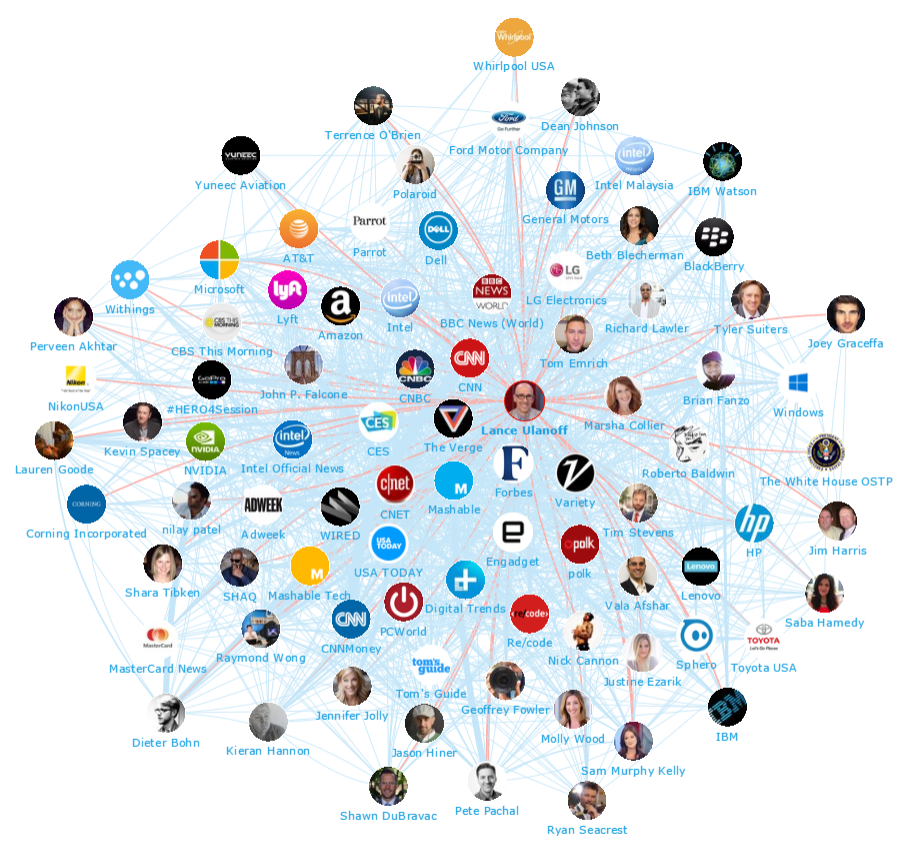 We looked at all the individuals engaging in #CES2016 discussion including journalists, brand ambassadors, youtubers and tv presenters to give you the top influencers in the CES 2016 landscape. Be sure to hit the button below to get the full top 100 list!

With all the discussion and resources available online, our analysis produced a great set of independent information resources and communities. It was interesting to see media outlets  such Mashable, CNET and TechCrunch leading the debate alongside brands such as Intel, Lenovo and Ford. Be sure to download the full analysis for free to get an idea of who are the most influential CES 2016 brands!

Disclaimer: As ever with these lists, it must be stressed that the ranking is by no means a definitive measurement of influence, as there is no such thing. The brands and individuals listed are undoubtedly influential when it comes to driving discussion around CES 2016. The PageRank based methodology we use to extract influencers on a particular topic takes into account the number and quality of contextual references that a user receives. These calculations are independent of a user’s number of followers, but we do filter our lists based on how much a user is engaged in the conversation and the influence they drive through their networks.