The 21st United Nations Climate Change Conference, Cop21, is being held in Le Bourget, Paris from 30th November – 11th December 2015. The main objective of the conference is to achieve a legally binding and universal agreement on climate change from all the nations of the world, to be signed in 2015, and implemented by 2020. The key expected result, according to the organizing committee, is to limit global warming to below 2 degrees Celsius by 2100 in order to avoid serious climate catastrophes. Countries will be expected to commit to reducing greenhouse gas emissions and de-carbonizing electricity production, by relying less on fossil fuels and looking to harness more renewable sources of energy.

Cop21 and the subsequent climate change legislation will be of high importance to a large number of industries and organisations worldwide, so we were keen to analyse the climate change discussion to identify which influencers were driving the most engagement on social media. We analysed over 955K tweets around the following query “#climatechange OR #cop21 OR climateconference OR “climate conference” OR #GoCop21” and identified the top 100 most influential brands and individuals leading the discussion on Twitter. We discovered a very engaged community, with much discussion between individuals and brands, joining together in conversations around climate change. Below you can see a network map of the online conversation created with our Influencer Relationship Management software IRM. This map shows the number 2 influencer Christiana Figueres, the Executive Secretary of the UN Framework Convention on Climate Change (UNFCCC), at the centre and the conversations to and from all the influencers in her field. Be sure to click on the map to enjoy the full size network diagram in greater detail. 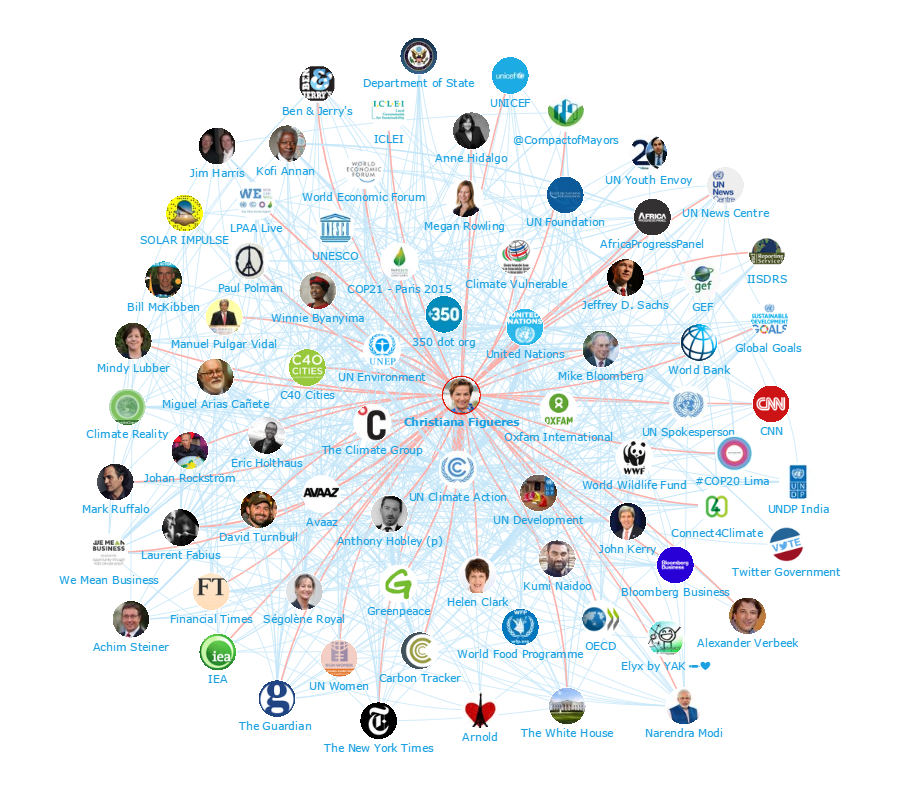 Below you can see another network map created in IRM (Influencer Relationship Management software) showing the #1 Brand UN Climate Action at the centre and the conversations to and from the different influencers in their field. As you can see it is a very engaged community with many conversations. If you are interested in learning more about identifying, managing and engaging with influencers click here to get in touch! 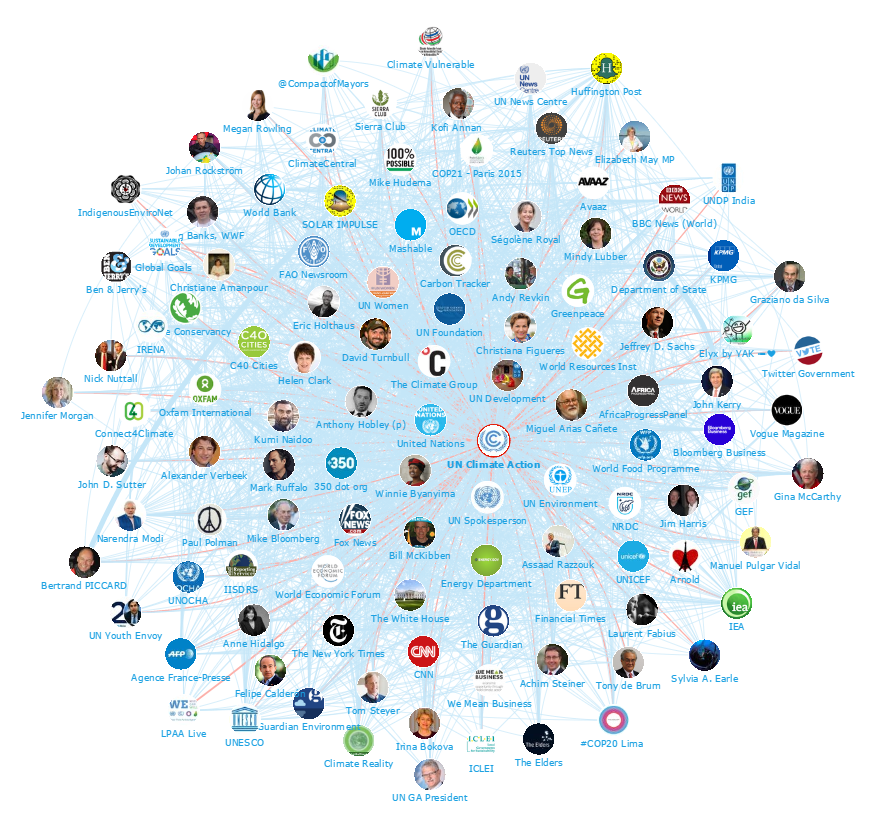 We looked at all the individuals engaging on Twitter to bring you a list of the top 100 influencers in Climate Change. Be sure to hit the download now button below to download the full report.

With all the discussion and resources available online, our analysis produced a great set of independent information resources and communities. It was interesting to see political institutions  such as the UN and the White House leading the debate alongside charities such as WWF and Unicef and media outlets such as CNN. Be sure to download the full analysis for free to get an idea of who are the most influential climate change brands!

Disclaimer: As ever with these lists, it must be stressed that the ranking is by no means a definitive measurement of influence, as there is no such thing. The brands and individuals listed are undoubtedly influential when it comes to driving discussion around climate change. The PageRank based methodology we use to extract influencers on a particular topic takes into account the number and quality of contextual references that a user receives. These calculations are independent of a user’s number of followers, but we do filter our lists based on how much a user is engaged in the conversation and the influence they drive through their networks.