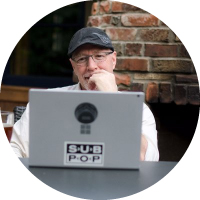 James Whittaker’s career spans academia, start-ups and top tech companies and starts in 1986 as the first computer science graduate hired by the FBI. James then worked as a freelance developer, most notably for IBM, Ericsson, SAP, Cisco and Microsoft, specialising in test automation. He joined the faculty at the Florida Institute of Technology where he continued his prolific publication record in software testing and security. In 2002 his security work was spun off by the university into a startup which was later acquired by Raytheon.

James’ first stint at Microsoft was in Trustworthy Computing and Visual Studio. He then joined Google as an engineering director and led teams working on Chrome, Maps and Google+. In 2012 James rejoined Microsoft.

James is known for being a creative and passionate leader and sought after speaker and author. Of his five books two have been Jolt Award finalists and one a best-seller. Follow him on Twitter @docjamesw and at his website docjamesw.com.

IoT has never been part of my day job until recently. I gained expertise by putting my hot tub on the Internet of Things as a side hustle. I learned by doing and in doing so really saw the potential. My tub owns its own data. It knows it’s a hot tub. It knows how to maintain itself, order its chemicals, maintain its water and knows the people who get it in.

My primary interest in in IoT and its ability to solve the discoverability problem. Right now humans have to navigate too many choices and can’t navigate the torrent that is the web and cloud. We must do better than browsers and apps. Machines can solve this. They can learn about us and about the world and find definitive answers for the humans they serve. Think about the age-old “what do you want to do tonight” conundrum we humans deal with daily. The browser has failed us as a discoverability tool. Apps are only marginally better. But if all the things we could do are searching for us at the same time our own machine assistants are looking for them then you’ve created an entirely new web. A peer-to-peer web where machines serve both the seeking and the sought. This is so game-changing that it gets me out of bed with a smile on my face every single day. Almost any question one asks … the machines are the answer.

All of them and none of them. No one should work in a vacuum but everyone needs to learn to think independently.

My creative influences are musicians and scientists. Really into local music and neuroscience at the moment. So much inspiration to be found in both.

Which brands or products stand out for you in IoT?

None. This is a wide open field waiting for explorers and conquerors. The winners are still being decided and I am withholding judgements.

I do tons of public speaking on IoT. Educating people about how to advertise and market in a world of machines and how disruption is going to kill off so many white collar fields like accounting, finance, law and even politics. The future is exciting and I love educating people about its possibilities.

Tweet at me or connect with me on LinkedIn.