The Rugby World Cup 2015 ran for six weeks from 18th September until the 31st October 2015 and produced some of the most exciting matches the tournament has ever seen. Japan dazzled the crowds as they took on the Springboks and won. Wales beat England at Twickenham in a tense game that went right down to the wire, a result which meant England had to beat Australia to progress to the quarter finals. A task that ultimately proved too much for the hosts. Australia went on to win against Wales and Scotland, but the game against Scotland ended controversially with a last minute penalty that was later ruled to be an incorrect decision. The Pumas reached the semi-finals where they met Australia, who proved too tough an opponent. The Springboks came close to beating the All Blacks in the other semi-final but took the bronze instead, so we had a thrilling Australia vs New Zealand final. It was the tournament favourites the All Blacks who eventually took the cup home to New Zealand. The 2015 Rugby World Cup has been declared the biggest and best tournament to date.

We were very interested to see which influencers and brands drove the most conversation on Twitter, especially the sponsors, so we analysed over 1 Million engaged tweets from 30th September – 28th October on the following query (#rwc2015 OR rugbyworldcup OR rwc2015 OR #rwcfinal OR #rwc2015news OR #rugbyworldcup2015) OR (Rugby AND (Heineken OR Fujitsu OR Toshiba OR Canon OR DHL OR MasterCard OR Emirates OR “Land Rover” OR “Societe Generale” OR “Coca-Cola” OR Toshiba OR Gilbert OR Canterbury OR “Clifford Chance” OR “EY” OR “Ernst and Young” OR Dove OR Tissot OR Duracell OR Heathrow OR Grants)) and identified the top 100 most influential brands and individuals leading the discussion on Twitter. We discovered a very engaged community, with fans, players, teams, sponsors and brands all chatting about the matches. Below you can see a network map of the online conversation created with our Influencer Relationship Management software IRM. This map shows the #1 Brand the Rugby World Cup’s official Twitter Handle at the centre, and the conversations to and from the influencers in its field. 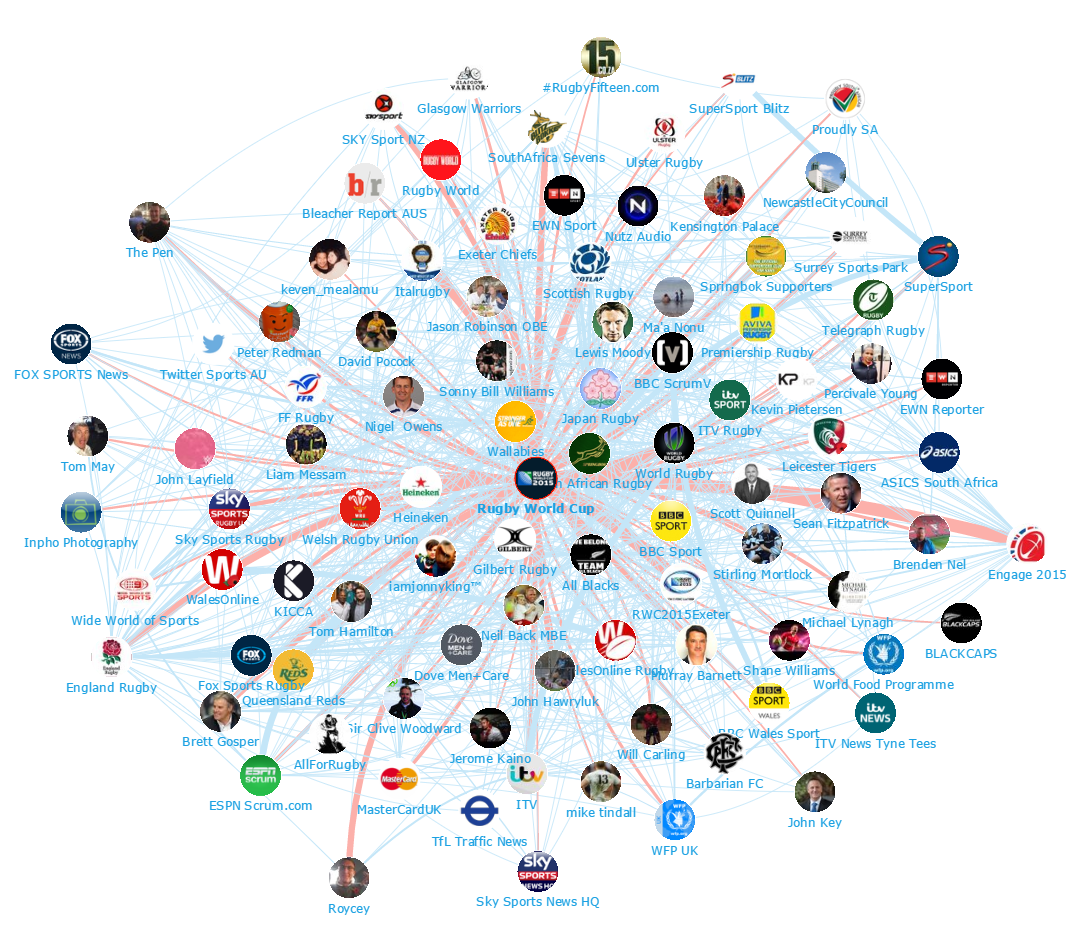 Below you can see another network map created in IRM (Influencer Relationship Management software) showing the #1 sponsor Dove Men + Care at the centre, and the conversations to and from the different influencers in its field. As you can see it is a very engaged community with many conversations. If you are interested in learning more about identifying, managing and engaging with influencers click here to get in touch! 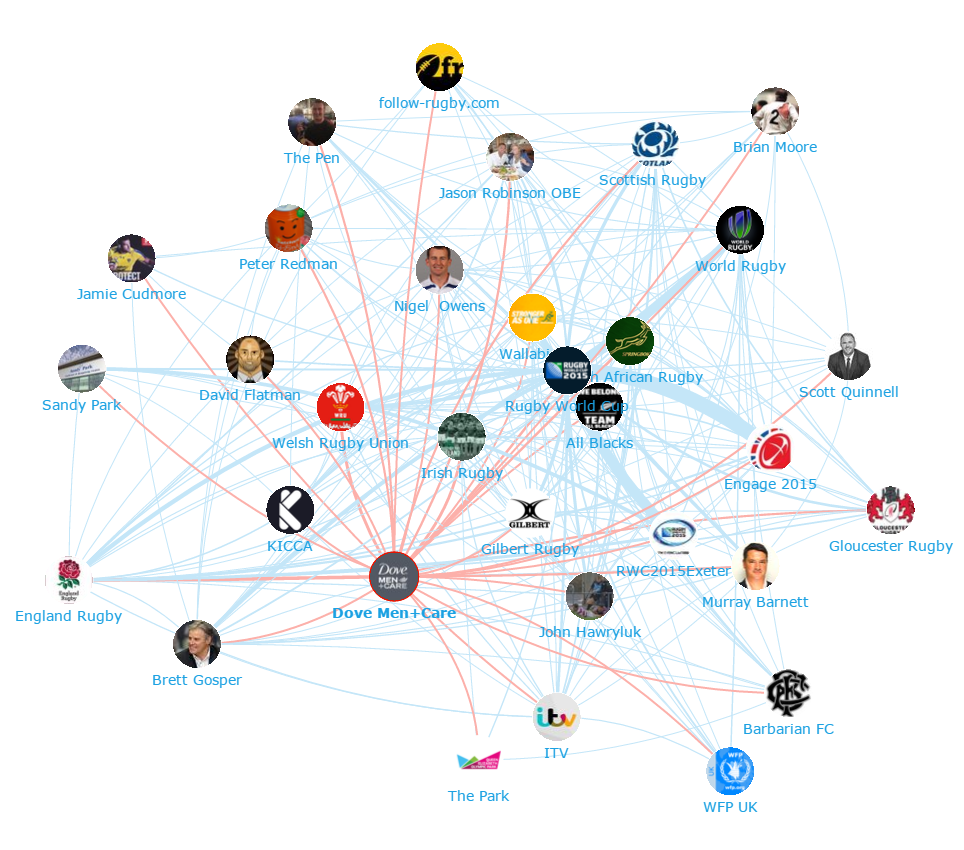 It was interesting to note that in terms of volume of posts around the search query, the brands had a much larger share of voice during the tournament compared to the individuals. The Rugby World Cup’s official twitter page was very vocal and drove the most engagement as did the All Blacks and other official team twitter handles. Out of the sponsors Dove Men + Care drove the most engagement. 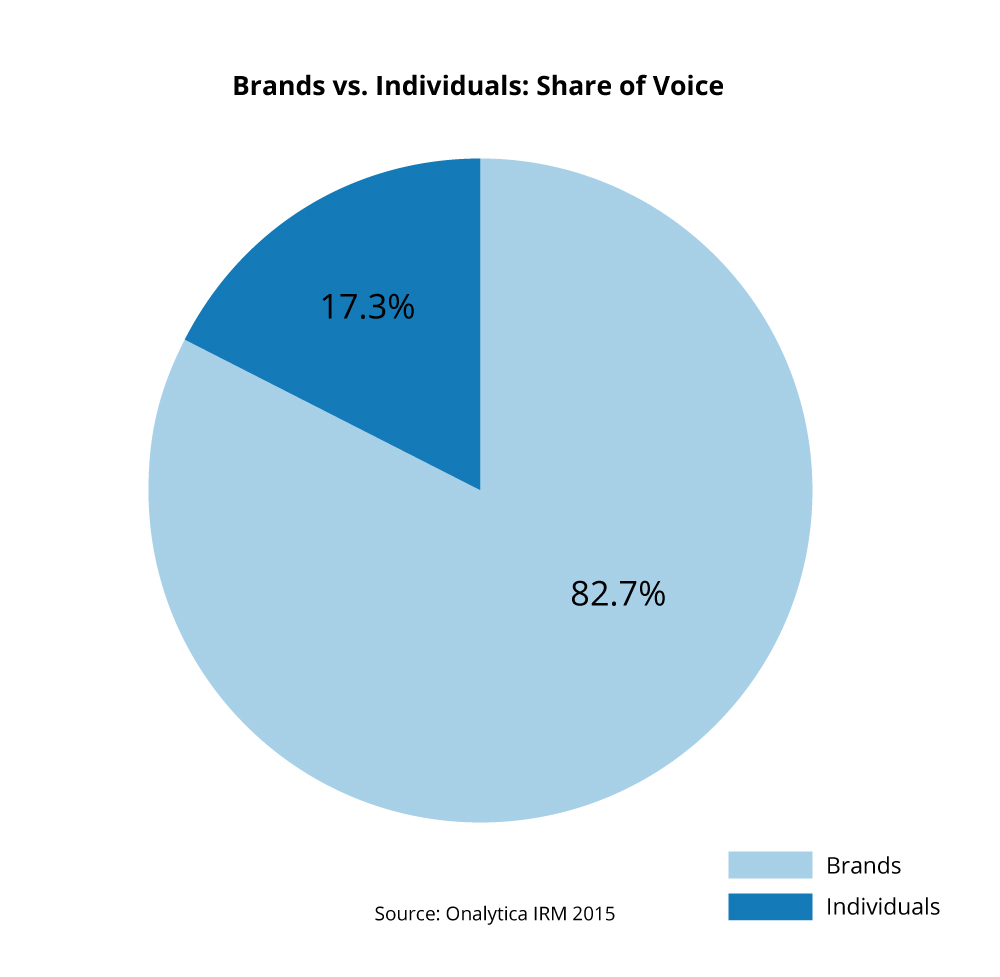 With all the discussion and resources available online, our analysis produced a great set of independent information resources and communities. It was interesting to see where the sponsors Dove Men+Care, Land Rover, DHL and Heineken appeared on the list.

We looked at all the individuals engaging on Twitter to bring you a list of the top 100 most influential individuals at the Rugby World Cup 2015. Be sure to hit the download button below to grab the full report and see who ranks beyond the top 50.

REQUEST A FREE DEMO
Disclaimer: As ever with these lists, it must be stressed that the ranking is by no means a definitive measurement of influence, as there is no such thing. The brands and individuals listed are undoubtedly influential when it comes to driving discussion around the Rugby World Cup. The PageRank based methodology we use to extract influencers on a particular topic takes into account the number and quality of contextual references that a user receives. These calculations are independent of a user’s number of followers, but we do filter our lists based on how much a user is engaged in the conversation and the influence they drive through their networks.