2016 was a pivotal year for the virtual reality industry, with almost 100 million VR units shipped worldwide. We analysed the conversation back then in this blog post, and we wanted to revisit the topic to uncover the top influencers, brands and publications driving the online conversations in 2017.

Virtual reality technology holds enormous potential to change the future for a number of fields; from medicine, business and the military, to architecture and manufacturing. As the technology becomes cheaper and more widespread, we can expect to see many more innovative uses for VR in the future. It has the potential to fundamentally change the way in which we communicate and work. The VR industry is experiencing explosive growth with the worldwide market for headsets growing by 25.5% year over year in the second quarter of 2017 according to the IDC. VR headsets account for 98% of the market.

We analyzed over 5.4M social media posts and blog content from January 2017 to see which associated topics and sub-categories received the most attention in conjunction with the virtual reality online discussion. Here is the word cloud showing the most frequently used keywords: 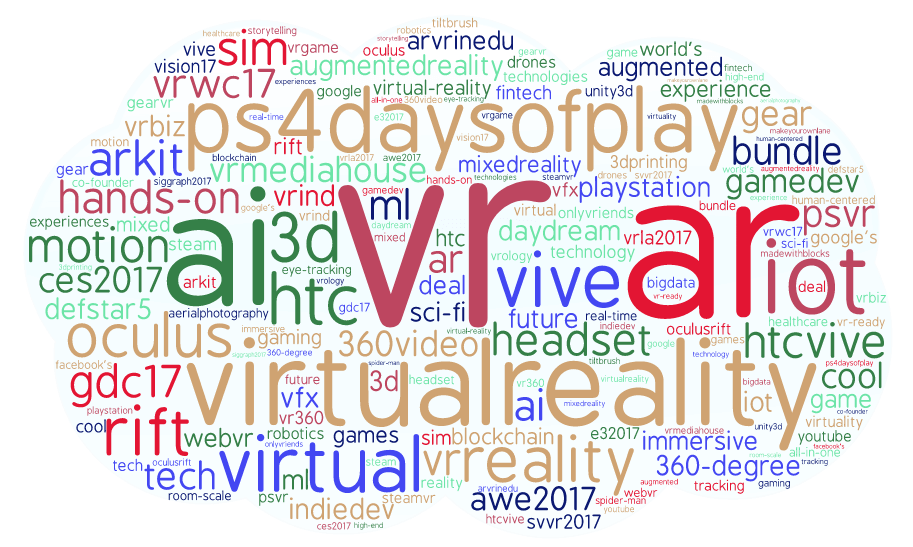 The most frequently mentioned words spoken about in the context of virtual reality were:

Below is a network map showing recent interactions with the number one influencer Rick King. This map was created with our Influencer Relationship Management software (IRM). If you are interested in learning more about identifying, managing and engaging with influencers click here to get in touch! 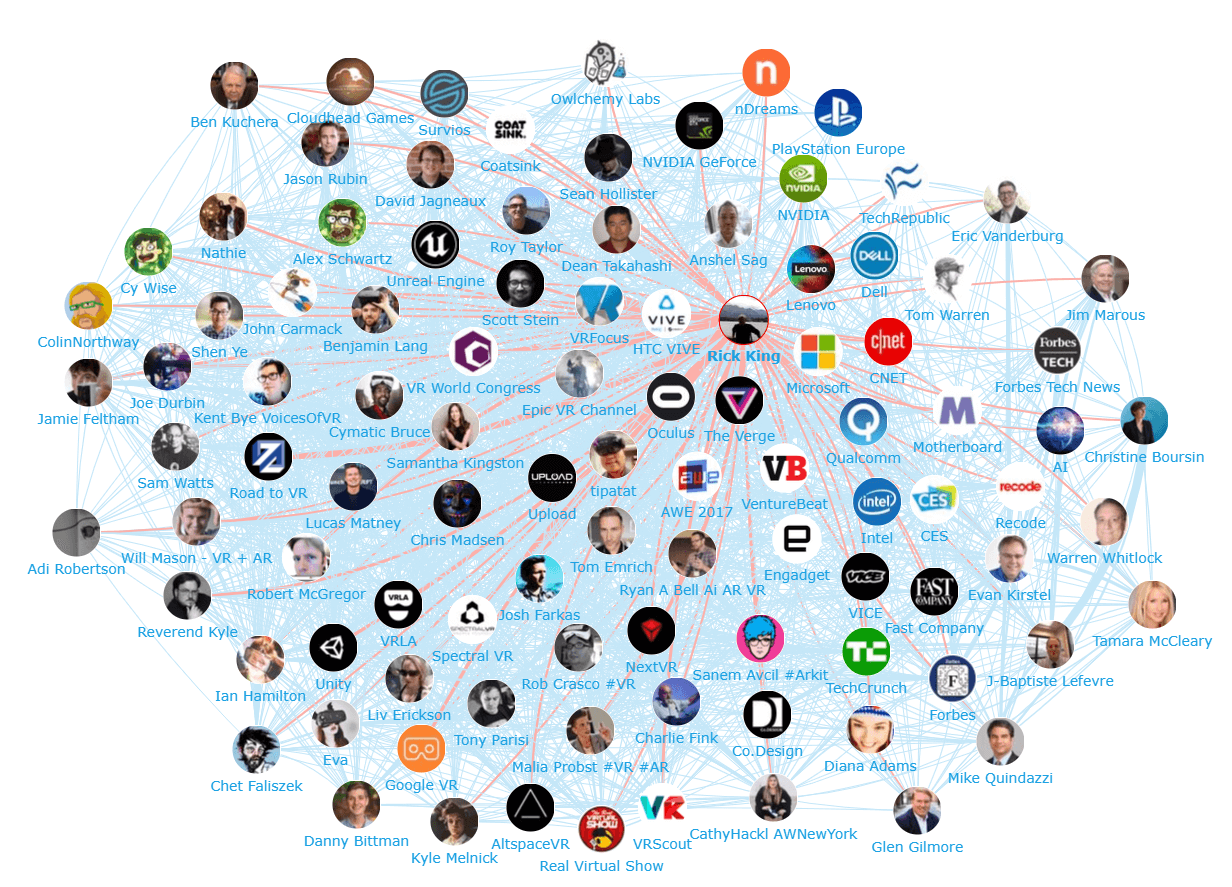 Below you can see another network map created with our Influencer Relationship Management software (IRM) showing the number 1 brand Oculus at the centre, and all the virtual reality conversations to and from the influencers in their field. Be sure to click on the map to see it in more detail: 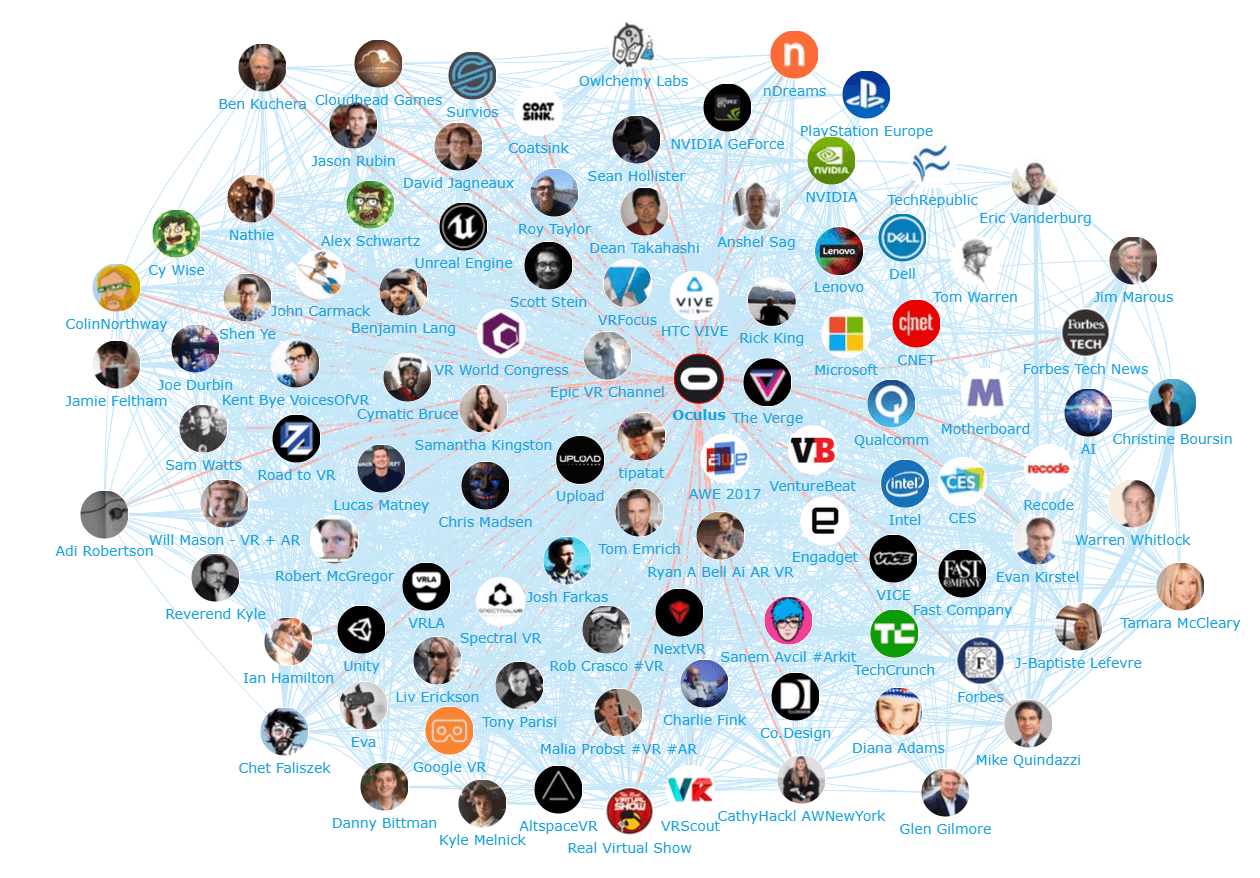 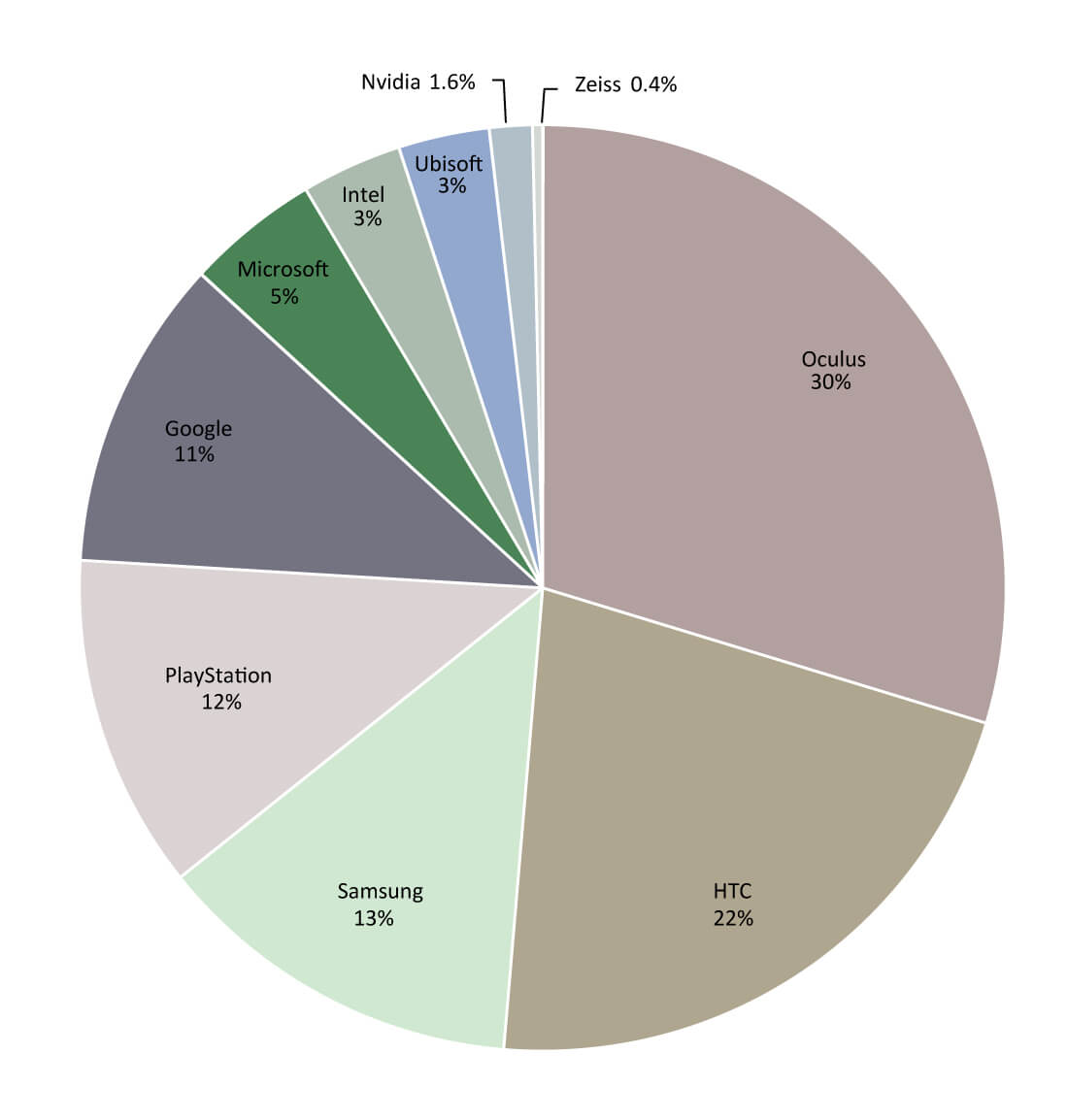 Samsung received the 3rd highest number of mentions with a 13% share of voice. Samsung’s Gear VR is the most popular mobile VR headset on the market in terms of sales. The Gear VR device is a lot more affordable when compared to its rivals, with the exception of the Daydream View that costs around the same. Also part of the reason for their popularity is a lot of consumers who purchased the Galaxy S7 or S7 Edge, received the Gear VR for free. PlayStation received the 4th highest number of mentions with a 12% share of voice. Although it is behind Samsung in global headset sales, it had sold a total of 519,400 units of its VR Headset before the second quarter of 2017, capturing 24.4% of the total market share, according to IDC.

Google was the 5th most popular brand mentioned by the top virtual reality influencers with an 11% share of voice. Google’s new Daydream VR platform is already making big waves in the tech industry. They are working with partners like Qualcomm, HTC and Lenovo to develop Daydream headsets that are completely free of phones, PCs and wires. They also offer VR experiences for web browsing and listening to music. Microsoft were the 6th most popular brand mentioned by the VR influencers with a 5% share of voice. Microsoft has been making a lot of low key noise about VR, AR, and mixed reality recently, and has just announced they’re acquiring AltspaceVR with the aim of  “building the world’s preeminent mixed reality community”.

Intel received 3% of all brand mentions among the top VR influencers. Intel’s new system called ‘Portal Ridge’wants to overcome the disadvantages of streaming VR content from a powerful PC to a mobile phone acting as a headset. The system makes use of existing hardware from HTC to combine the benefits of a gaming PC and your mobile. Ubisoft, who build their VR games to leverage multiplayer experiences in order to enhance the social aspect of VR, also received 3% share of voice.

The powerful graphics cards built by NVIDIA ensure that they are in the top 10 VR brands with a 1.6% share of voice. They were followed lastly by Zeiss with 0.4% of all brand mentions. Zeiss develop diverse optics and optoelectronics technologies, and they recently announced the launch of the VR One Connect headset.

We looked at all the individuals engaging on Twitter to bring you a list of the top influencers in virtual reality. Below is the top 50, if you want to see who ranks from 50-100 be sure to download the full report by clicking the download button below.

We also looked at all the brands engaging on Twitter to bring you a list of the top brands talking about virtual reality. Below is the top 50, if you want to see who ranks from 50-100 be sure to download the report to get the full top 100 list, and see who are most the influential brands in virtual reality.

As part of our new analysis, we also now scan all the publications engaging on social media and on blogs to bring you a list of the top publications talking about virtual reality. Below is the top 50, if you want to see who ranks from 50-100 be sure to download the report to get the full top 100 list.

At Onalytica we love building these lists and want to give back to our loyal readers as much as we can. If you’re interested in other topics (such as Big Data, Augmented Reality, Digital Marketing) be sure to have a gander on our blog or why not propose some topics to us on twitter?

Effective influencer marketing starts with identifying relevant influencers for your brand. Onalytica’s new Discovery platform mines over 200 billion posts a year into a curated database of over 500K global social media influencers, including data from Twitter, Blogs, Instagram, YouTube, Facebook, LinkedIn Profile Links + Demographic Data. Our software enables you to identify influencers by topic, demographic or content and includes real-time tracking and measurement reporting to scale your influencer relations. Get a free demo today by clicking the button below!

Disclaimer: As ever with these lists, it must be stressed that the ranking is by no means a definitive measurement of influence, as there is no such thing. The individuals, brands and publications listed are undoubtedly influential when it comes to driving discussion around virtual reality.

The PageRank based methodology we use to extract influencers on a particular topic takes into account the number and quality of contextual references that a user receives measured as resonance (engagement). These calculations also take into account a user’s relevance (number of tweets on topic) and reach (number of followers). If you want to learn more, please read our article that outlines influencer identification.

Download this free report which reveals the top 100 virtual reality influencers, brands and publications in 2017