The results for 2016 were remarkably different from our analysis of Water Security Influencers posting about World Water Day in 2015, with important implications for the role of individual influencers in digital advocacy and campaigning. The most noteworthy difference in 2016 was the introduction of three individual influencers playing prominent roles in discussions on World Water Day, with three individuals making the top ten list. Whereas UN agencies and non profit organisations represented nine out of the top ten water security influencers discussing World Water Day in 2015, this number dropped to six in 2016, as three non profit organisations were displaced from the top ten list by influential individuals. Only one corporate player managed to penetrate the top ten list in 2016, mirroring the previous year’s results.

When creating our list of top ten World Water Day influencers for 2015, we examined data from January 1, 2015 to December 31, 2015. Given that World Water Day takes place on March 22nd of each year, it is reasonable that some of the outreach conducted in 2015 was in fact aimed to generate awareness of the upcoming World Water Day event hosted in 2016. However, in order to provide our readers with a timely assessment of influencers’ digital outreach on the 2016 event, we felt it important to provide preliminary analysis on influencer activity between January 1, 2016 and March 31, 2016. When examining the volume of posts by water security influencers, it is therefore important to recognise that volumes in 2015 took place over the space of a one-year period, whereas volumes analysed in 2016 are limited to Q1 2016 only.

Top Water Security Influencers posted about World Water Day on 3,121 occasions in the first three months of 2016. This represents a remarkable increase of 45.9% over 2015’s volumes, despite a significantly shorter measurement period.  Of these posts, 45.7% (1426 posts) belonged to the top ten Water Security Influencers posting about World Water Day in 2016: 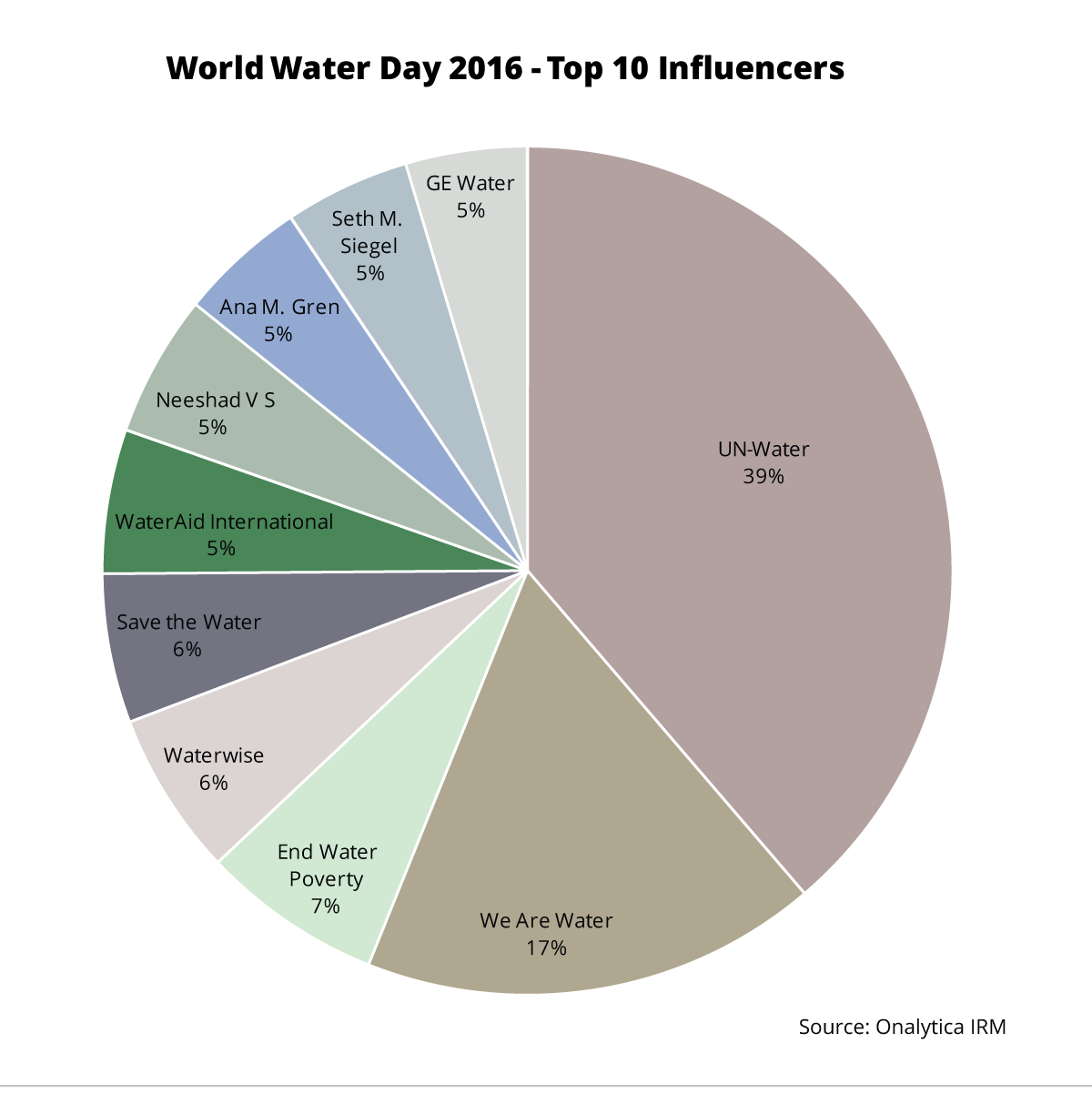 As in 2015, the top Water Security Influencers discussing World Water Day were largely non-profit and intergovernmental organisations, however unlike last year individual influencers played an important role in the top ten, capturing three places on the list.

UN-Water,  the entity that coordinates the UN’s work on water and sanitation and officially runs the World Water Day campaign, is once again the leading Influencer. Together, UN-Water and We Are Water led the conversation on World Water Day, collectively absorbing 56.1% of the share of voice. Non profit organisations together absorbed 41.7% of the share of voice of top ten Water Security Influencers posting about World Water Day, which represented a 19.8% decrease in share of voice from 2015. The only influencer to make the list which was not a UN agency, non-profit organisation, or an individual, was GE Water, which mentioned World Water Day 66 times in 2016, an increase of 41.7% over last year’s volume of posts. 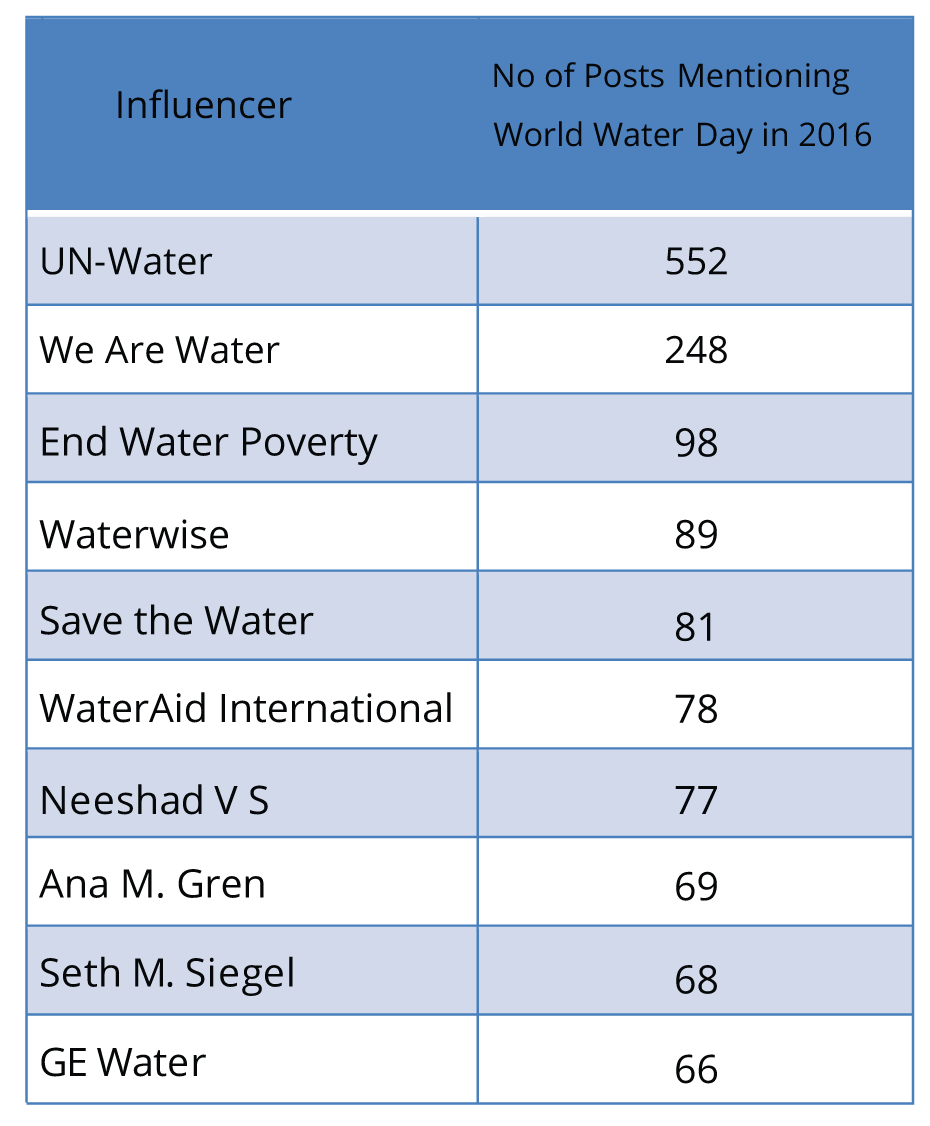 What are the implications of this analysis? Influential individuals can play a very important role in your advocacy, campaigning, and digital outreach efforts. Individuals have the capacity to drive crucial messages forward and improve the reach of your campaigns. We can help you identify the most influential individuals and brands to help raise brand awareness and campaign messaging – contact us to learn more.

We anticipate that as thought leaders, journalists, non-profit organisations, intergovernmental organisations, businesses and consumers alike grow increasingly aware of World Water Day, digital activity on the event will increase. We hope this information on the digital activity of key Water Security Influencers will assist you in your future advocacy and outreach as you prepare for next year’s event.