The term Artificial Intelligence was originally coined by John McCarthy in 1955, defining it as “the science and engineering of making intelligent machines”. Now more than a half a century old, the field of AI and machine learning is finally achieving some of its oldest goals by being used successfully in areas such as data mining, industrial robotics, logistics, speech recognition, banking software, medical diagnosis and search engines.

Tech giants have all been investing heavily in AI and Machine Learning. In 2010 Facebook introduced facial recognition technology, and in 2013 Mark Zuckerberg dedicated a lab to AI research. In 2014 Google bought artificial intelligence startup DeepMind for $400 million (£263 million), making it one of the largest tech acquisitions to date. Microsoft have also been investing heavily in AI with their project Oxford, which uses an emotion detection service that can assign an emotion to a person depending on their facial expression. This kind of facial recognition allows photos to be edited depending on the feelings expressed in them.

IBM have also been making large strides in AI and Machine learning with their Watson computer which famously won the US quiz show Jeopardy in 2011, outperforming his human counterparts. IBM and have now teamed up with Nvidia incorporating Nvidia’s Tesla K80 GPUs, making Watson 1.7 faster at responding to inquiries. IBM are also developing a teaching assistant app that will plan lessons based on approved material.

Apple has bought artificial intelligence startup Emotient and while it’s not completely clear what Apple’s plans are, reports suggest that the acquisition will centre on facial recognition technology and customers reaction to ads. Apple have also acquired UK-based AI company Vocal IQ with reports suggesting that they are aiming to develop Siri further and use Vocal IQ’s speech AI software.

From Q1 to Q3 2015 we saw $47.2 billion invested in AI and Machine Learning, and with roughly 900 companies working in the AI field tackling problems in business intelligence, finance and security, the centuries’ long quest to develop machines and software with human-like intelligence inches closer to reality.

We reached out to some of the top 20 influencers to ask them for their views on artificial intelligence and machine learning. We spoke to Mike Tamir (#1), Kirk Borne (#2), Gregory Piatetsky (#3), Gene Kogan (#7) and Randal S. Olson (#10). Be sure to follow them to stay up to date on the best content and resources on artificial intelligence and machine learning!

“We are at an important moment in the history of AI and Machine Learning. The 20th century is littered with false starts and failures to apply rule based feedback to help machines linguistically interact with humans.  Recent machine learning driven advances in how we represent text data with continuous neural word embedding have changed the game.  Techniques such as word2vec have enabled us to densely represent natural language data for deep learning applications capable of successfully classifying the semantic relationships between concepts and and even inferential relationships between sentences.  This success coupled with similar successes with deep learning convo-nets when it comes to image recognition have potentially brought us to the precipice of a “Deep Blue” moment for challenging problems like the “Turing Test” that have daunted AI for decades.”

“People sometimes ask “how is machine learning different from data mining and AI?” I say that machine learning refers to the basis set of mathematical algorithms that learn the models that describe the patterns and features in data, while data mining is the application of those algorithms for making discoveries from large data sets, and Artificial Intelligence is the application of those algorithms for autonomous action and decision-making within devices (such as robotics). I would now combine all of those concepts under the umbrella of data science. Furthermore, the emergence of deep learning, fast machine learning technologies (such as GPUs), and modular architectures (such as Raspberry Pi) is now blurring the distinction between data mining and AI. Actionable intelligence is no longer just a business buzzword — it is a business imperative.”

“Machine Learning is at the core of AI. Machine Learning and especially Deep Learning, enabled by Big Data, fast GPUs, and better algorithms, is already achieving human or superhuman performance in many areas, including game playing, image recognition, and speech understanding. Past “experts” who said that AI will not defeat human chess master, or human chess champion, or will not recognize images, etc, have all been proven wrong. There do not seem to be any barriers to what AI and Machine Learning can achieve. Now is the time to take AI seriously and consider immense benefits but also huge risks from a human-level AI.”

“I’m excited about machine learning’s applications for human creativity and expressivity, and would like to see more resources invested in democratizing access to research and education.”

“With DeepMind’s AlphaGO taking on a world expert Go player, Boston Dynamics’ bipedal robot (Atlas) marching into the robotics scene, and so much more, 2016 is looking to be a groundbreaking year for artificial intelligence and machine learning. I look forward to reporting on the latest in AI & ML as we advance the state-of-the-art of what machines can accomplish.” 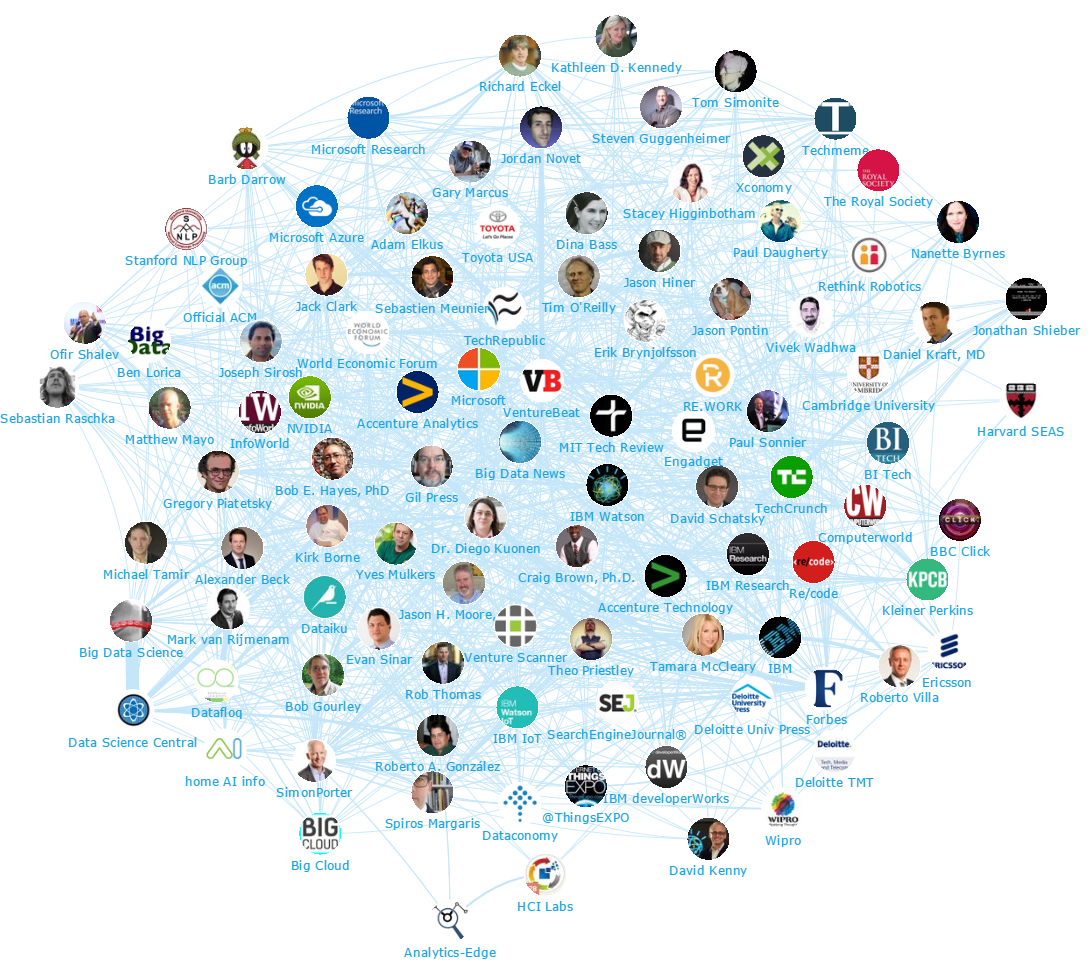 Below you can see another network map created with our Influencer Relationship Management software (IRM) showing the #2 Influencer Kirk Borne, and the conversations to and from the different influencers in his field. If you are interested in learning more about identifying, managing and engaging with influencers click here to get in touch! 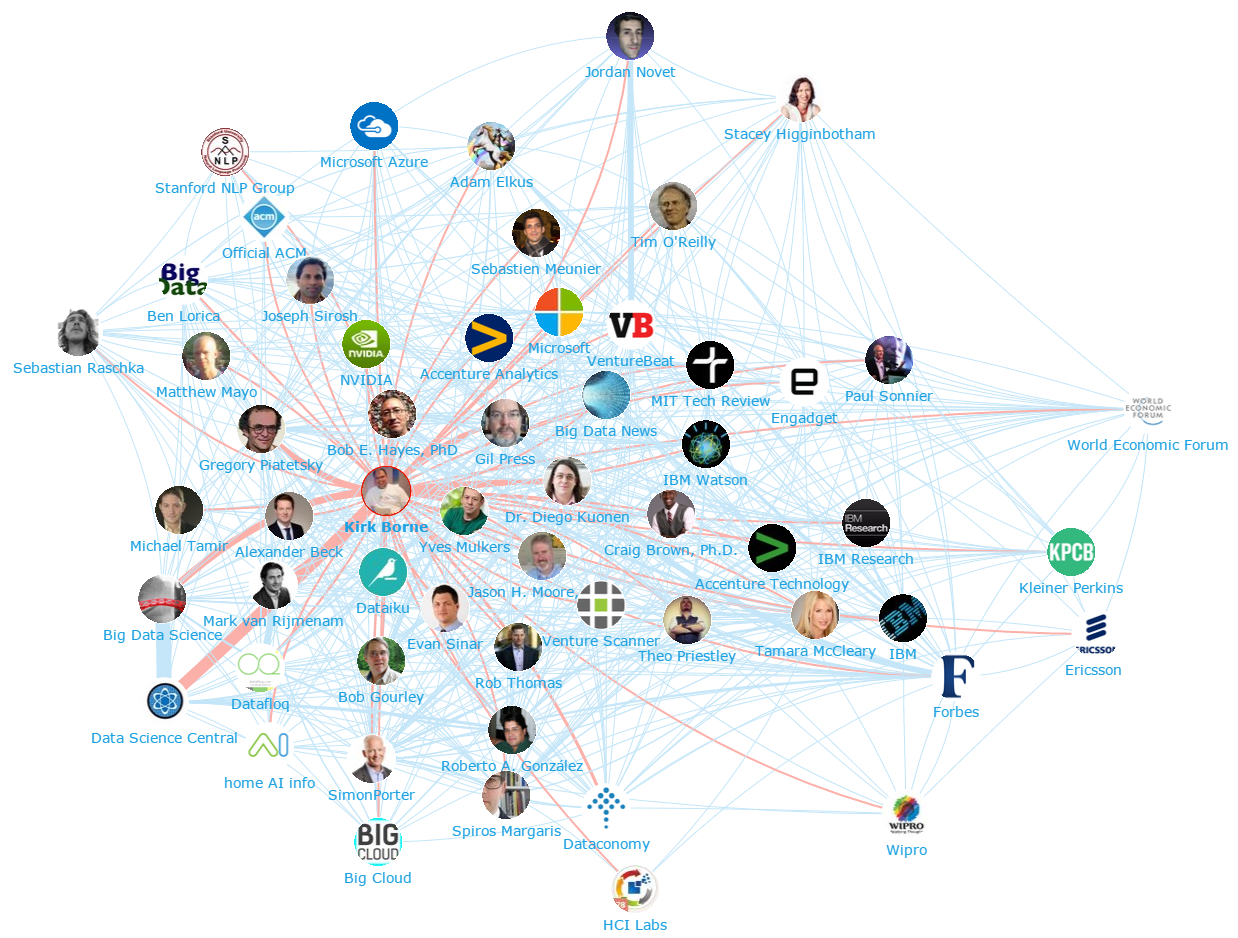 We looked at all the individuals engaging on Twitter to bring you a list of the top 100 most influential individuals in the Artificial Intelligence and Machine Learning conversation. Be sure to download the report to see who ranked beyond 50 on the list.

In the top 100 brands we found a great selection of organisations such as IBM, Microsoft, Nvidia and Yahoo Labs as well as some top industry resources such as TechCrunch and MIT Tech Review. Be sure to download the full report to see who ranked from 50-100.

Disclaimer: As ever with these lists, it must be stressed that the ranking is by no means a definitive measurement of influence, as there is no such thing. The brands and individuals listed are undoubtedly influential when it comes to driving discussion in the Artificial Intelligence and Machine Learning debate.

Download this free report to learn who are the top 100 influencers in Artificial Intelligence and Machine Learning.