Augmented reality (AR) is a live direct or indirect view of a physical, real-world environment whose elements are augmented (or supplemented) by computer-generated sensory input such as sound, video, graphics or GPS data. As a result, the technology functions by enhancing one’s current perception of reality. This is in contrast to virtual reality which replaces the real world with a simulated one.

AR is in the early stages of an explosive growth cycle. The Pokemon Go phenomenon raised awareness and expectation for the vision of AR. Worldwide AR markets are poised to achieve significant growth with the use of smartphone apps and headsets or glasses to project digital information as images onto a game image or a work situation. Game Based and Industrial End-To-End Process IoT Augmented Reality markets are anticipated to reach $7 Trillion by 2027 according to Research and Markets.

Keith Curtin – Founder: See Digital
“A recent survey conducted by Forrester Research indicates that by the end of 2016, 4.8 billion people worldwide who use mobile devices will represent half of the global population. This is a clear indication that brands & agencies should be investing heavily in a strong, mobile-first strategy to connect with this mobile centric user-base. Augmented Reality (forecasted to be a $150 billion dollar industry by 2020) creates an opportunity for brands & agencies to build new digital pathways to tell stories, sell to and engage with consumers straight from product packaging in a way that’s never before been possible. While much emphasis lately has been primarily focused on gaming & promotional initiatives (hence the “Pokemon Go” effect) the core value for brands will be the acquisition of unique consumer data sets that can be leveraged by the emergence of Machine Learning, Artificial Intelligence and Predictive Data Analytics. There will be an incredible shift in precision within the digital marketing & eCommerce industry in the next few years!”

Sanem Avcil – Founder at Founder Politehelp
“For the following years with better 3D Graphics Augmented Reality games will impress all the gamers.”

Chris Madsen – Social VR Liaison at Road to VR, Partner Relations at Morph 3D
“Augmented Reality devices access, manipulate and present data in real time within the environment of the user. AR is becoming more powerful as evolving technology allows us to capture more environmental data than ever before.  AR applications utilizing this data allow interactions relative to our physical space effectively giving us superpowers such as the ability to look through walls, identify unknown objects, read foreign languages and even get step by step visual assistance with problems all in real time. As a tool for personal enhancement the possibilities are staggering. The most exciting thing to me is how artificial intelligence is converging with AR.  Fully interactive AI assistants, teachers, doctors, guides, instructors, entertainers, companions and more will eventually be just a command away.  What they will they look like and how they will function is a work in progress. At Morph 3D we are implementing dynamic, customizable avatars to provide AI’s, users and in-app characters a way to be represented in our multiple realities. We are living in the future, folks. Buckle up and enjoy the ride!”

Mike Quindazzi – Business Development Leader and Management Consultant at PwC
“How will enterprises engage their people and customers with augmented reality to drive a more productive experience? As the interfaces (including optics), fragment platforms, more powerful systems and new content continue to mature, the success of PokemonGo illustrates at least 10 use cases businesses can win with today.”

Rob Crasco – Co-Owner, VR Advocate / Entrepreneur at Cyber Adept
“Augmented Reality takes the power of the computer and overlays your reality with it. No longer just looking at a screen full of data you look through the screen and see the information in the context of the real world. Right now you can hunt for Pokémon, see directions and information about the street you are on, or get a planetariums worth of information over the night sky. Eventually AR will take the form of glasses that will show you translated versions of printed text, direct you to where you parked your car or help you assemble your Ikea furniture. This of course will lead to a fusion of augmented reality and virtual reality into mixed Reality, either by showing virtual objects in the real world like Microsoft HoloLens or Bringing Real Objects into a virtual space like Intel’s Project Alloy. Augmented reality will eventually become an ultimate tool helping you with your day to day tasks, as indispensable as your smartphone is to you today.”

“The conversation surrounding augmented reality and virtual reality, is at its core, one about the future of computing & human-computer interaction”

Tamara McCleary – CEO & Brand Ambassador at Thulium
“While often overshadowed by Virtual Reality (VR), I believe the future is even brighter for Augmented Reality (AR) in the near term.  I’m incredibly bullish for the possibilities of AR because I believe there is a distinct advantage for AR to be accepted sooner and on a wider basis than VR, particularly in the commercial sector.  AR is already in use by a number of companies through the use of Google Glass.  Surprised?  Google Glass is still in the field, particularly being trialed in the health care field for use by EMT’s and Emergency Room staff.  Additional augmented reality headsets like Microsofts Hololens will reach the market soon.  The use of AR in the commercial sector will be a tremendous boon for the technology and will allow it to mature without the need of an instant consumer hit.”

Dr. Monica Burns – Author and Founder of Class Tech Tips
“Scannable technology is a powerful teaching and learning tool. When it comes to engaging students in augmented reality experiences educators can create deeper learning opportunities where students are in the flow of learning. It’s been very exciting to watch teachers explore the ACES Framework outlined in my book *Deeper Learning with QR Codes and Augmented Reality: A Scannable Solution for Your Classroom.* With augmented reality teachers give students the opportunity to interact with course material in a completely new way!”

“While Virtual Reality gets a lot of talk because of how cool it is for gaming and entertainment, Augmented Reality is going to truly impact the way we work, play and live. Blended experiences between our digital lives and our offline lives are not only possible, but something we are seeking. From instant access to information to rapid training and development, Augmented Reality will have a huge impact this year and it will get even bigger in the future.”

Tim Hughes – Co Founder at Digital Leadership Associates
“Augmented Reality not Virtual Reality is the way forward for technology, with backers like Google who are 100% behind AR. The AR market will be driven by gaming, with Pokemon Go being the first mover and Harry Potter soon to be released, I can see that with each blockbuster film there will be an AR game. In the future you will see the integration of apps to offer a single AR interface.  Think Google street maps, plus Siri, plus augmented reality.  Thus giving the user a single experience across multiple platforms.”

We were very interested in seeing which brand and individuals were leading the discussion around augmented reality, so we analysed over 584K tweets from 5th July – 2nd October 2016 mentioning the key words: “Augmented Reality OR augmentedreality OR #AR”. We then identified the top 100 most influential brands and individuals leading the discussion on Twitter. What we discovered was a very engaged community, with much discussion between individuals and brands. Below you can see a network map of the online conversation with number one individual Keith Curtin  at the centre. This map was created with our Influencer Relationship Management software (IRM). Be sure to click on the map to enjoy the full size network diagram in greater detail. 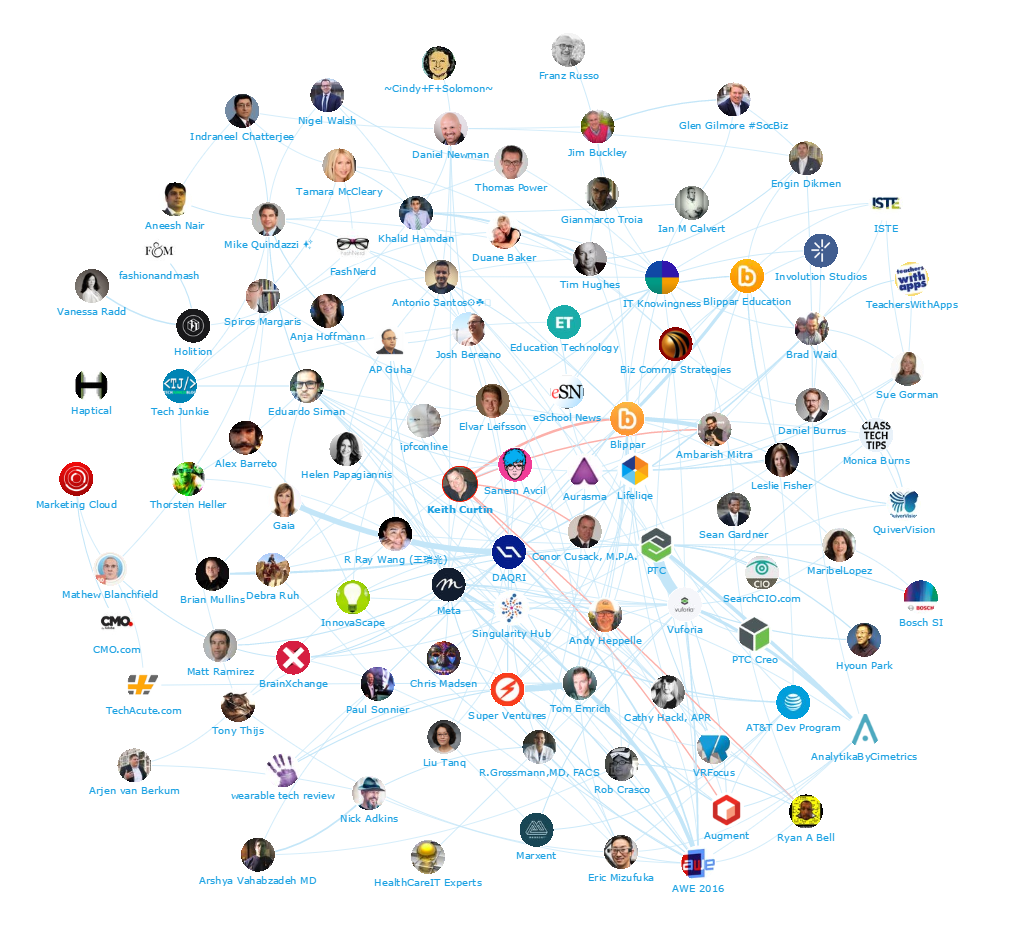 Below you can see another network map created with our Influencer Relationship Management software (IRM) showing the number 1 brand Aurasma at the centre and all the conversations to and from the influencers in their field. If you are interested in learning more about identifying, managing and engaging with influencers click here to get in touch! 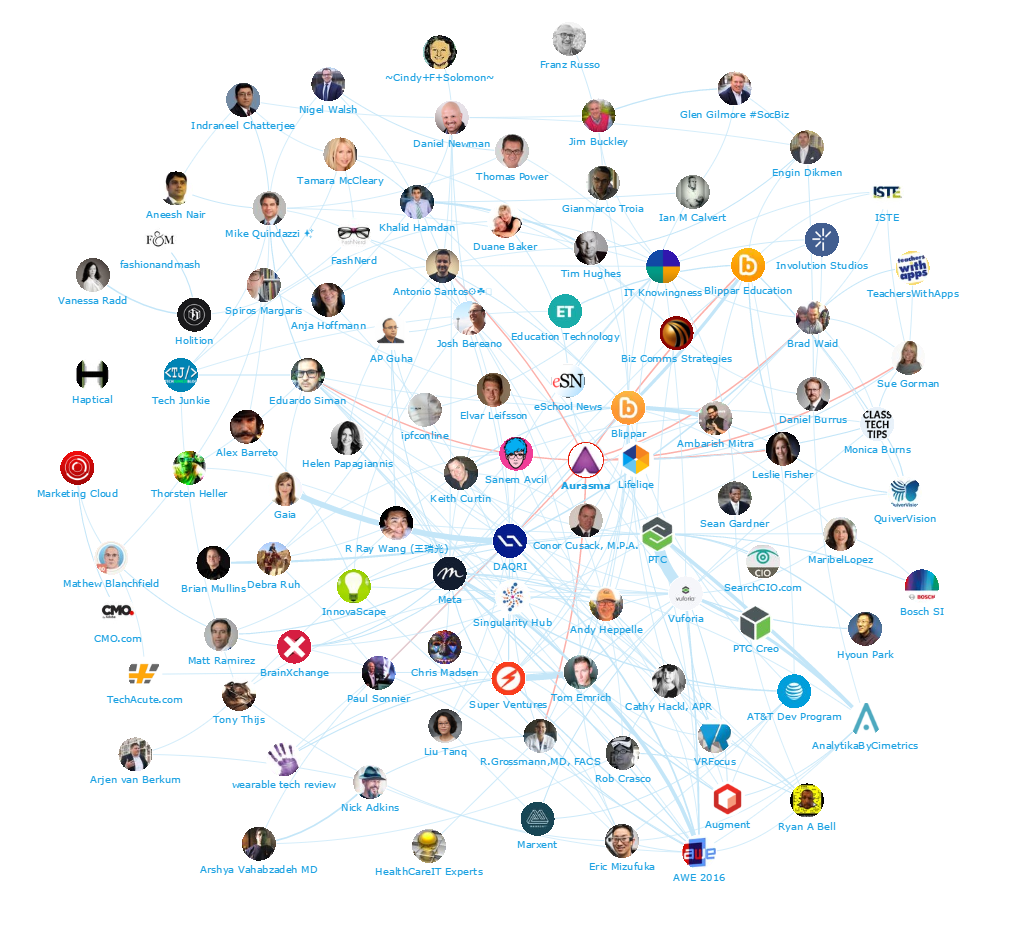 We looked at all the individuals engaging on Twitter to bring you a list of the top influencers in Augmented Reality. Below is the top 50, if you want to see who ranks from 50-100 be sure to download the full report by clicking the download button below.

We also looked at all the brands engaging on Twitter to bring you a list of the top brands talking about augmented reality. Below is the top 50, if you want to see who ranks from 50-100 be sure to download the report to get the full top 100 list, and see who are most the influential brands in augmented reality.

Disclaimer: As ever with these lists, it must be stressed that the ranking is by no means a definitive measurement of influence, as there is no such thing. The brands and individuals listed are undoubtedly influential when it comes to driving discussion around augmented reality.