Crowdfunding has become an essential way to fund innovative startups worldwide since the Financial Crisis. It has democratized the capital formation process by taking funding away from banks and traditional capitalists and putting it into the hands of people who support those businesses as a donor or investor. Some years ago it was the first of the financial services to move online, and as finance continues to move online, we’ll soon look back at funding an startup on the web as commonplace. New laws are bringing the early stage venture capital markets online, and with them we will see more inclusive models that change the landscape of who invests.

We reached out to some of the top influencers on our list to ask them for their views on crowdfunding. We spoke to Kendall Almerico (#1), Chance Barnett (#8), Oscar Williams-Grut (#10), Robert Hoskins (#11), Mike Quindazzi (#25), Tony Zerucha (#29), Tricia Meyer (#34) and Samuel Guzik (#43). Be sure to follow them to stay up to date on the best content and resources on crowdfunding.

Kendall Almerico – CEO at BankRoll Ventures
“Crowdfunding takes the financing of small businesses out of the hands of uncaring banks and vulture capitalists and puts it into the hands of real people who can passionately support companies as a donor or investor, and by becoming a brand ambassador for the company. Crowdfunding is the true democratization of the capital formation process. Look at my client BrewDog. Started by two guys who loved to homebrew beer, BrewDog has become one of the most successful craft breweries in history. They’ve done five rounds of equity crowdfunding (including one on my funding platform), with more than $35 million raised. Now, BrewDog employs 600 people, distributes in 50 countries, owns 44 bars from Tokyo to Sao Paulo, and is expanding to the U.S. with a 100,000+ square foot brewery in Ohio. They have more than 50,000 crowdfunding investors worldwide. That’s 50,000 fans in a real community, who not only invested, but also promote BrewDog’s fantastic products on social media and in every way possible. This was all done without a dime from Wall Street or rich investors. BrewDog is truly the company that crowdfunding built. Crowdfunding is not just “Main Street meets Wall Street.” With crowdfunding, Main Street could eventually make Wall Street irrelevant”

Chance Barnett – CEO at Crowdfunder.com / Founding partner at VC Index fund
“As finance continues to move online, we’ll soon look back at funding a startup on the web as commonplace, rather than think of it as crowdfunding at all. New laws are bringing the early stage venture capital markets online, and with them expect to see more inclusive models that change the landscape of who invests, and who they invest in. This represents a sea change in the make up of who gets to own and profit from the most lucrative investments- early stage private investments”

Oscar Williams-Grut – Reporter at Business Insider
“Crowdfunding is a particularly interesting topic at the moment given where we are in the cycle. We’re starting to see a significant minority of businesses go under. You’d expect this given that these are high-risk investments in early-stage businesses. What will be interesting though is how the regulator reacts and the wider investing public. It’s easy for crowdfunding platforms to win over investors even while warning they could lose money if the times are good, but it gets tougher when negative headlines start rolling in. Whatever happens, we should see the sector mature in the next few years”

Robert Hoskins – Director of Media Relations / Crowdfunding PR Campaign Manager at Front Page Public Relations, Inc.
“The single biggest problem that founders and crowdfunding campaign managers face is not putting together a realistic marketing budget. It will cost at least $20k to shoot a great crowdfunding video and spend several months mastering the marketing prep-work outlined above. For example, if you went and hired someone off the street and paid them $7.25 times 40 hours a week times 4 weeks a month times 3 months in a prep-work marketing program, that would equate a marketing budget of $3,480.  The reality is that most good marketing people will bill out at least $25 per hour and great talent will bill out at $100 or more per hour. So using this math, crowdfunding campaigns should plan to spend at least $15,000 for marketing, social media, and PR support and another $5,000 to shoot a great pitch video and write a well-written crowdfunding campaign profile with language that sells. The campaigns that are raising millions of dollars are typically spending at least $50,000+ on one or more forms of digital advertising networks”

Tony Zerucha – Manager Editor at Bankless Times
“While crowdfunding has existed in different forms for a long time, several factors have come together over the past decade to help it flourish – dissatisfaction with selective access to traditional funding sources, the growth of technology, and the ability of the general public to access that technology. Those factors are not going away and will help ensure crowdfunding continues to grow as a force for positive change around the world”

Samuel Guzik – Founder, Guzik & Associates
“Crowdfunding is a word loaded with meaning. To some it signifies the sharing economy. To others, it is symbolic of the power of the Internet to allocate resources: capital, ideas and information. Kudos to Onalytica for creating a ground-breaking new tool to efficiently connect Ideas and Influencers on the Internet”

Mike Quindazzi – Business Development Leader and Management Consultant at PwC
“Crowdfunding is a relatively new and very exciting method of raising money through small, individual contributions from a large number of people, typically via a digitally enable p2p platform. Crowdfunding techniques have successfully raised money in the US for a wide array of activities, including film, music, stage, and video game productions, consumer products, artwork, and charitable and civic projects. We are now starting to see a large uptick in peer-to-peer lending platforms aiming to transform the consumer lending industry with some estimates projecting a $150 billion by 2025. Additionally, in the US, the SEC has been working to provide a path for securities-based crowdfunding, which moves crowdfunding from purpose to ownership-driven”

Tricia Meyer – Managing Attorney at Meyer Law Ltd.
“Entrepreneurs and investors have benefited from the various crowdfunding platforms, and the market segment is helping businesses raise large sums of money in order to accelerate their operations; however, it’s important to choose which platform to use wisely as it may impact a startups chance of success in the long run.  This is particularly true of equity crowdfunding where new laws and restrictions are being placed on companies which means an added cost to comply with filings and disclosures required by the SEC.”

We were interested in seeing which topics were spoken of the most in the context of crowdfunding, so we analysed tweets and blogs from the top 100 influencers and brands between 20th August  – 20th October 2016 and counted the number of times various topics were mentioned to create a topic share of voice pie chart: 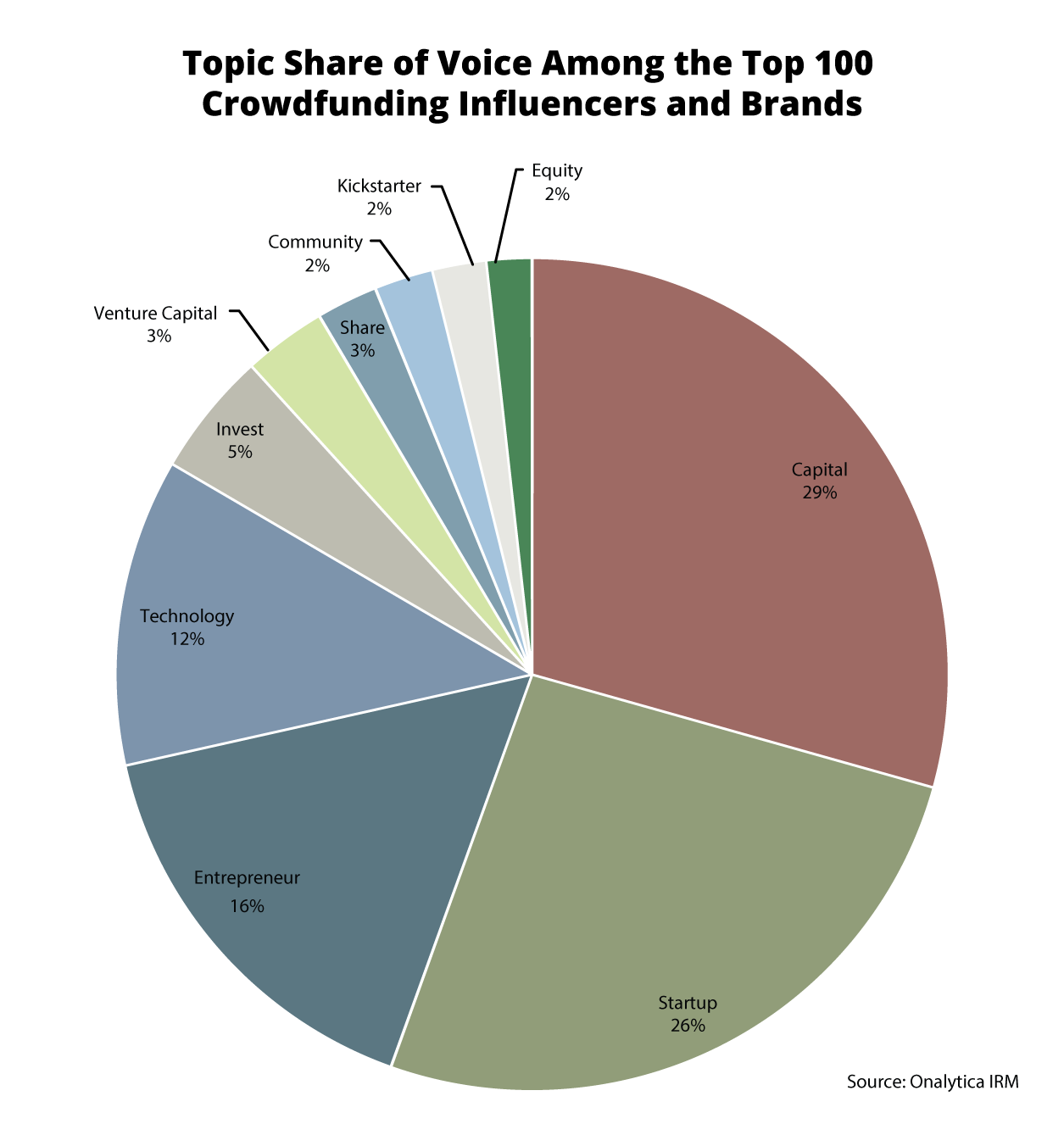 We were very interested in seeing which brand and individuals were leading the discussion around crowdfunding, so we analysed over 53K tweets mentioning the key words: ((crowdfunding OR crowdfund) AND platform) AND NOT (SME OR SMB OR Policy OR Regulation OR Entrepreneur OR Entrepreneurs OR Entrepreneurship OR Fintech OR innovation OR Startup OR Startups) from the 20th August – 20th October 2016. We then identified the top 100 most influential brands and individuals leading the discussion on Twitter. What we discovered was a very engaged community, with much discussion between individuals and brands. Below you can see a network map of the online conversation with number one individual Kendall Almerico at the centre. This map was created with our Influencer Relationship Management software (IRM). Be sure to click on the map to enjoy the full size network diagram in greater detail. 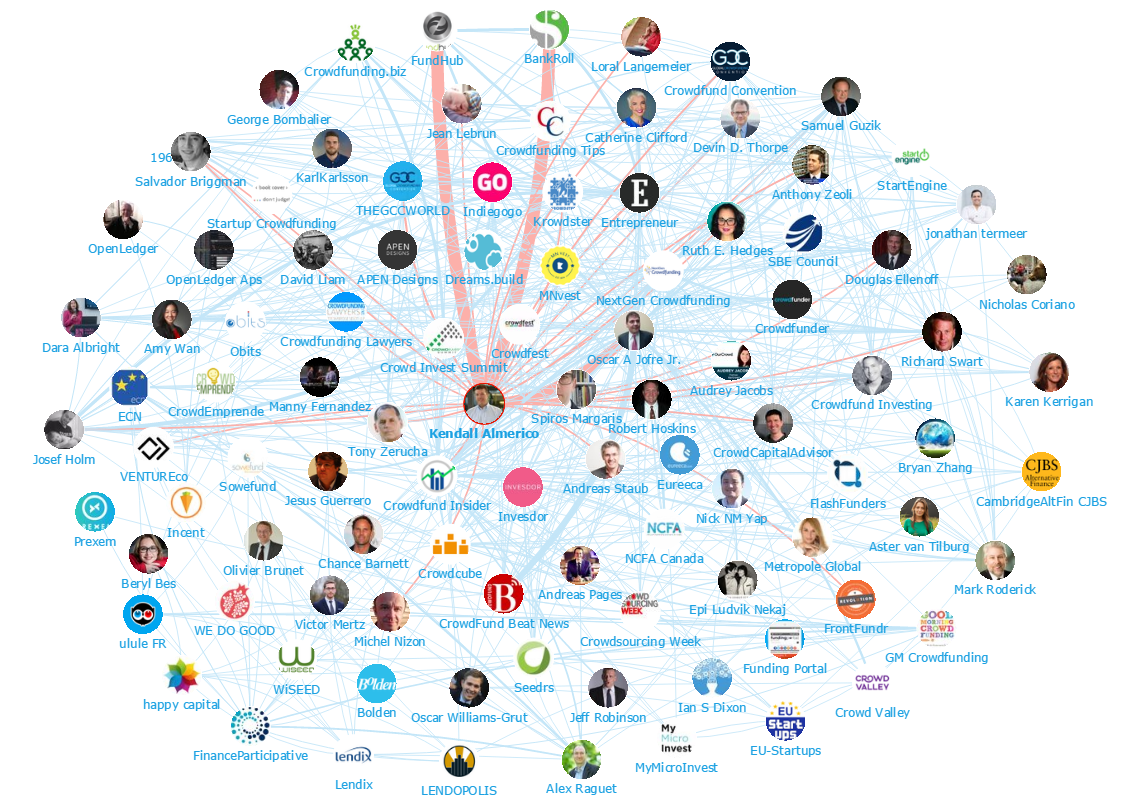 Below you can see another network map created with our Influencer Relationship Management software (IRM) showing Entrepreneur at the centre and all the conversations to and from the influencers in their field. If you are interested in learning more about identifying, managing and engaging with influencers click here to get in touch! 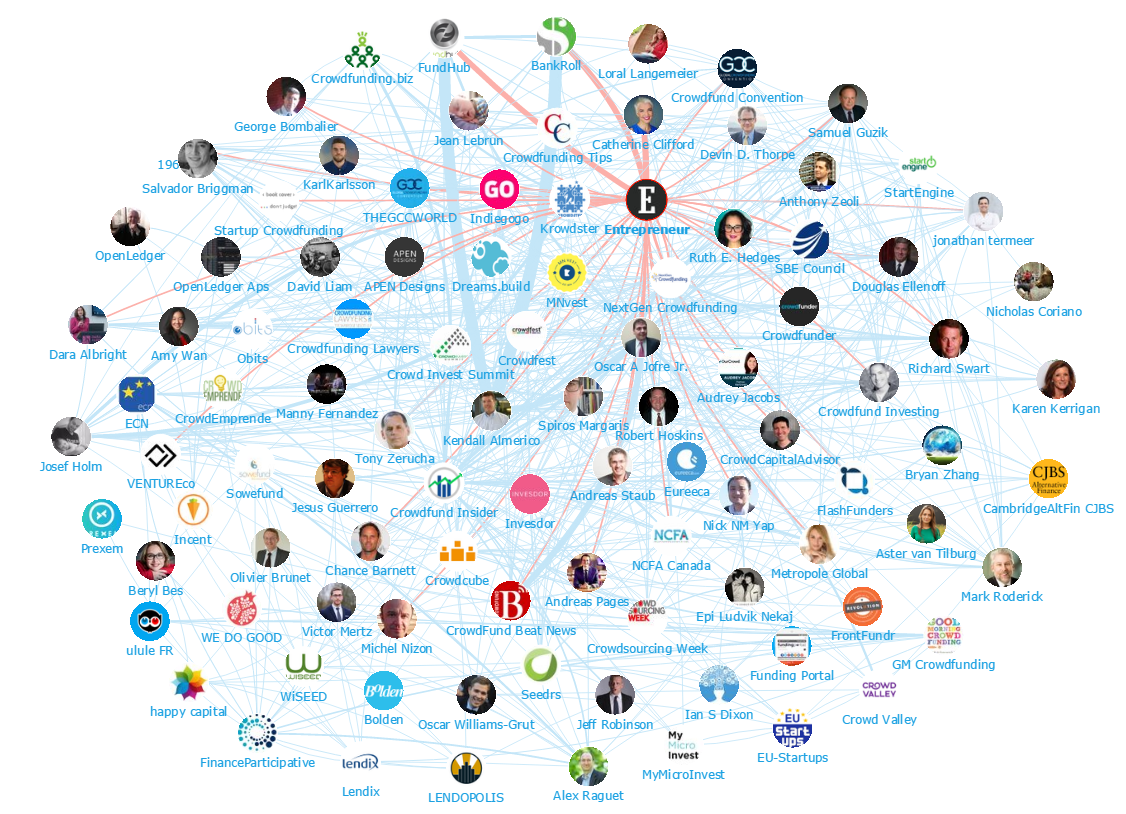 We looked at all the individuals engaging on Twitter to bring you a list of the top influencers in crowdfunding. Below is the top 50, if you want to see who ranks from 50-100 be sure to download the full report by clicking the download button below.

We also looked at all the brands engaging on Twitter to bring you a list of the top brands talking about crowdfunding. Below is the top 50, if you want to see who ranks from 50-100 be sure to download the report to get the full top 100 list, and see who are most the influential brands in crowdfunding.

Disclaimer: As ever with these lists, it must be stressed that the ranking is by no means a definitive measurement of influence, as there is no such thing. The brands and individuals listed are undoubtedly influential when it comes to driving discussion around crowdfunding. The PageRank based methodology we use to extract influencers on a particular topic takes into account the number and quality of contextual references that a user receives. These calculations also take into account a user’s relevance (number of tweets on topic) and reach (number of followers). If you want to learn more, please read our article that outlines influencer identification.<a