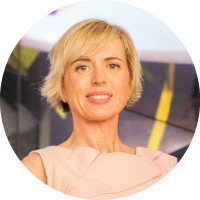 Carme Artigas is the co-Founder and CEO at Synergic Partners, a company that specializes in Big Data that was acquired by Telefónica in 2015. Carme Artigas has more than 20 years of experience in first line management. She started the first virtual business incubator in 1996, a career path that she has maintained until today leading disruptive technology companies. She is a member of the Technology and Innovation Commission at the CEOE (Spanish Confederation of Employers’ Organizations), she also belongs to the Industry Affiliate Partners at the Columbia University Data Science Institute (NYC). Artigas is also a member of the Board of Directors at the Spanish Association of Directors (AED) and has been appointed by the University of Stanford (California) as ambassador in Madrid of the Conference “Women in Data Science” (WIDS).

How did you get to become an expert in big data?

it is actually a very interesting story. Back in 2001 I had the opportunity to assist at a conference in Barcelona (Spain) where Bill Clinton had a talk. it was one week after the events of 11-S. There was a point at his speech where he said “we had all the data but we were unable to see it”. It was then when something clicked in me and from that moment I knew that the future it would be crucial looking at our own data and extracting insights from them.

In 2007 I cofounded a Big Data consultancy firm after more than 20 years in the Telecommunications and innovation field. I was prior the CEO of Ericsson Innova, the venture capital firm of European telecom leader Ericsson. In my whole professional career I have been driven by what was on the edge of technologies.

After more than 10 years in this field I can tell how we, as society, have evolved and matured in the use of data to help companies to extract business value from it but also how in the public sector these technologies have a major impact for the wellbeing of citizens.

What areas of big data are you most passionate about?

Talking about data, there are 3 topics that really catch my attention; the first one, related to the evolution of AI along with its ethical challenges, I think the main issue will not be the technical progress needed to make machines smarter but how we, as society, set the rules for its function.

The second is the one related to the convergence of IoT analytics and blockchain; in both cases we are talking about distributed systems. There is no doubt that Blockchain will play a role in how devices will communicate directly between each other.

Finally,  the implications when becoming a data driven organization. Again, the gap in this implementation is not the maturity of the technology but our capacity to internalize that change. A cultural change is needed in order to achieve an organization where decisions are taken by data and not simple intuition.

Which big data influencers influence you?

In the era of Internet is difficult to pick up a couple of Big Data influencers, as we have blogs, articles in the traditional media, twitter, linkedin and so many sources where we share information. But I would say that Bernard Marr, a regular contributor to the World Economic Forum, Forbes and Huffington Post, is one of the first names that comes to my mind. Also, Roger Magoulas, together with Ben Lorica, were the first ones to coin the word “Big Data” as a concept. Thomas L. Friedman, Andrew Ng and John Hagel are also influencers that I read frequently.

Outside of big data who else influences you?

Mostly, I feel influenced by people that have set out their very own projects:

I think this year we will see an important acceleration in the use of wireless 5G, that will allows the development of IoT solutions in many areas, such as Health (e.g. long-distance surgeries) and transport (e.g autonomous car, traffic automation).

Also, in the next months we will see more small and medium companies taking advantage of their own data thanks to Big Data technologies, increasingly affordable and accessible. But more specifically, there will be a speed in the automatization of data wrangling solutions that today takes most of the time of Data Scientists.

Finally, as data privacy is taking an important discussion in society, I think a new ecosystem of platforms will raise where users will have the possibility to manage their own data which up now is not possible.

I am always very open when it comes to sharing expertise and trying to build upon that; that is why I would be interested in collaborating in go-to-market activities, solutions development, partnerships and education.

One of the best ways to reach me is by twitter @carmeartigas, but also I receive emails from the website Synergic Partners and by email: info@synergicpartners.com