PropTech – also described as as CREtech (Commercial Real Estate Technology) or REtech (Real Estate Technology), refers to new technologies specifically designed to improve processes and propel the property industry forward. Some of the best examples of successful PropTech would include Rightmove, Zoopla and Purple Bricks. However PropTech is not only about online estate agents, there are also innovative startups working with banks to streamline the mortgage application process, as well as proptech to help landlords find and screen tenants. Proptech is breaking down the industry into it’s component parts, and automating processes as much as possible to save time and drive better results.

We reached out to some of the top influencers on our list to ask them for their views on proptech. We spoke to Dan Hughes (#1), James Dearsley (#2), Jonas Haberkorn (#3), Wouter Truffino (#7), Peter Barkow (#15) and Ishaan Malhi (#18) Be sure to follow them to stay up to date on the best content and resources on proptech.

“Technology is something that has been impacting the property market for many years, but in recent times the rate of change has meant a rapid rise up the agenda for many companies. 2016 is the year where PropTech has raised its profile and in coming years, as there is more activity and the pace of change increases, we will see it having an increasing influence.”

– Founder of The Digital Marketing Bureau
“The very fact we have these sorts of influencer lists, just shows that PropTech has evolved to become a “thing”. I have seen a surge of interest in the last 18 months and, in particular, the last 6 months. I expect this increased awareness to continue into 2017 as it becomes the new normal around a sector that realises they need to innovate to progress”

“Software is programming the world as digital technology is advancing exponentially and transforming our world into something new, something increasingly complex. Property Technology (PropTech) has emerged as the key term for all aspects of technology in real estate and construction. Startups all over the world have set out to enable technology-driven innovation in residential and commercial real estate. 2016 set a new record for funding levels as well as media coverage. Many startups will fail and only a few will eventually succeed. But do not underestimate this movement, this shift to access over ownership, this shift to being on-demand, data-driven and customer-centric. Technological progress in the real estate space implies new challenges and opportunities for people in our industry. It is time to rethink real estate from the top-down by increasing data transparency and the rate of experimentation. Innovation requires a willingness to fail. There has been a lot of talk. Let’s be realistic. And change the world.”

Wouter Truffino – Co-founder of Holland PropTech
“The Real Estate industry is at the beginning of digitalization and adding new technologies to create new business. Corporate captains create new opportunities when they start working with startup founders. I predict that PropTech will be the buzzword in 2017.”

“Let’s awaken our friends and coworkers to the new normal: Every company is a tech company. Social media is the internet. When it comes to real estate, data is a demigod. However, inordinate amounts of transparent data is of no worth if we allow it to undermine our business’ ability to innovate for ourselves, or worse rather, become affected by intentional misinformation. Some PropTech companies actually turn a profit while hemorrhaging the genius of our industry. Some trashy companies and vendors still litter our land, taking advantage of tech-inept yet hard working real estate professionals. We need your help to popularize the new real estate industry. Our industry does have shining stars. We are fostering collective wisdom on social media, at conferences and through dialogue to raise the standard. We are living in an age where access to information is easier and open to more people than ever. We see in government, education and other sectors how useless, archaic processes lead to destruction. Real estate is too important to let it stay CoStar and Microsoft Excel dependent. Turn off the fake news on TV and Facebook — get in the real conversation online. Add your two cents to this $127 billion industry before it ends up like Los Angeles’ rush hour traffic — overcrowded and stewing in pollution.”

“My observation and analysis of Real Estate over the last 15 or so years is fairly straight forward: It is an inherently conservative sector. Furthermore, after years of property price inflation and record investments almost all parts of the value chain are doing incredibly well. Thus, there is little interest and need for change. As a consequence the pick up of proptech by traditional players has been even slower than in adjacent sectors such as banking or insurance. Nevertheless, the success of startups such as AirBnB and WeWork reaching 10bn+ valuations has not gone unnoticed. The German property federation has hosted first events tackling innovation and the European Public Real Estate association has invited “the ultimate thinking machine” and Mr. Singularity Raymond Kurzweil himself to give a key note at its annual conference. It seems as if startups and incumbents are finally getting closer, albeit slowly… We will see which of the two will hold the upper hand or which collaborative models will evolve in the future.”

Ishaan Malhi – Founder of Trussle
“2017 will be a transitional year for PropTech. Where 2016 saw a lot of companies in the sector get started and work towards achieving ‘product-market-fit’, 2017 will be the year many of those companies mature and scale into their incumbents’ territory. Feathers will be rustled, but the smartest incumbents will find ways to work with those startups who are innovating to add value to their customer experience.”

We were interested in seeing which topics were spoken of the most in the context of proptech, so we analysed tweets and blogs from the top 100 influencers and brands between 1st July – 14th December 2016, and counted the number of times various topics were mentioned to create a topic share of voice pie chart: 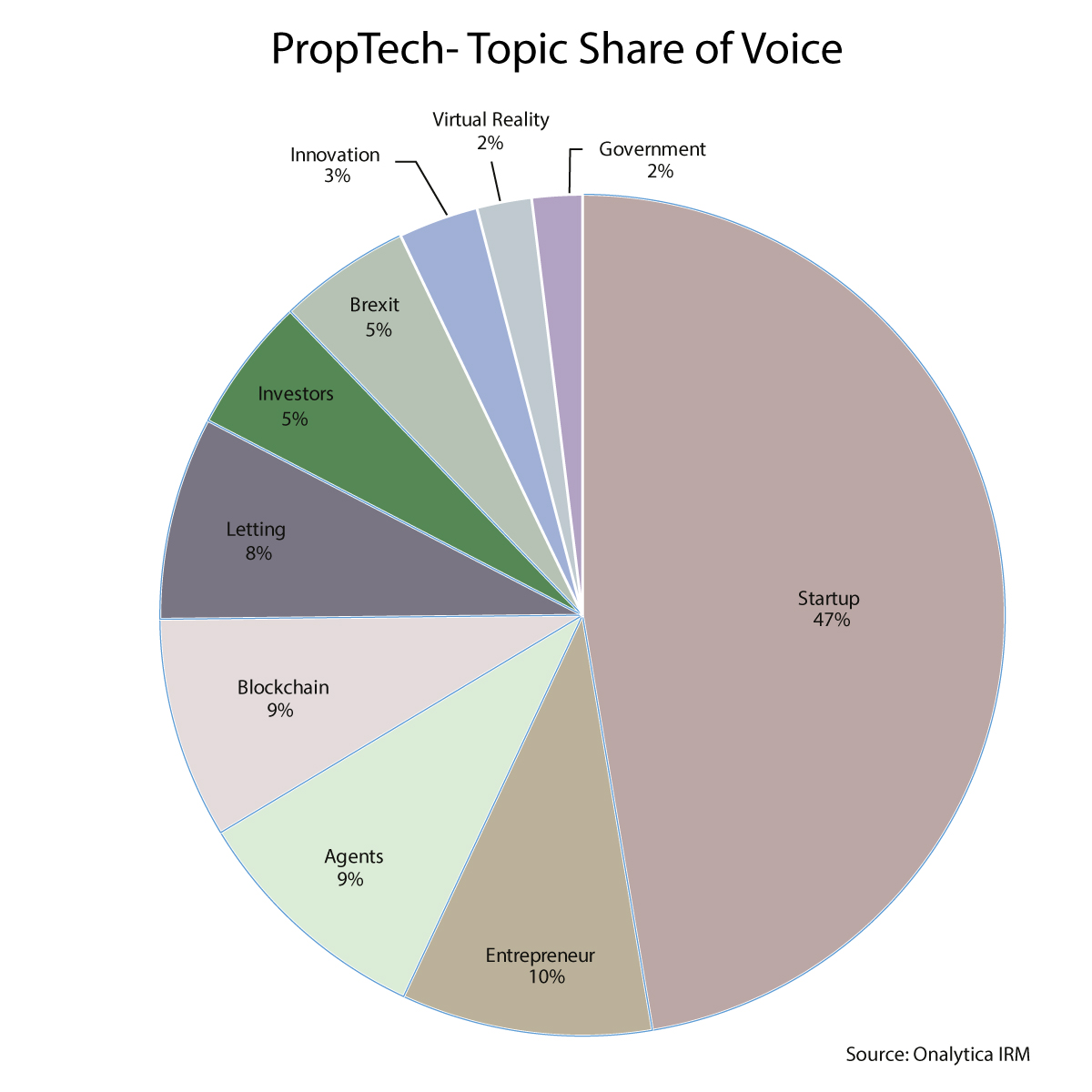 We were very interested in seeing which brand and individuals were leading the discussion around proptech, so we analysed over 17K tweets mentioning the key words: “Proptech OR Property Tech OR propertytech OR property technology OR propertytechnology” from 9th September – 8th December 2016. We then identified the top 100 most influential brands and individuals leading the discussion on Twitter. What we discovered was a very engaged community, with much discussion between individuals and brands. Below you can see a network map of the online robotics conversation with the number one influencer Dan Hughes at the centre. This map was created with our Influencer Relationship Management software (IRM). Be sure to click on the map to enjoy the full size network diagram in greater detail. 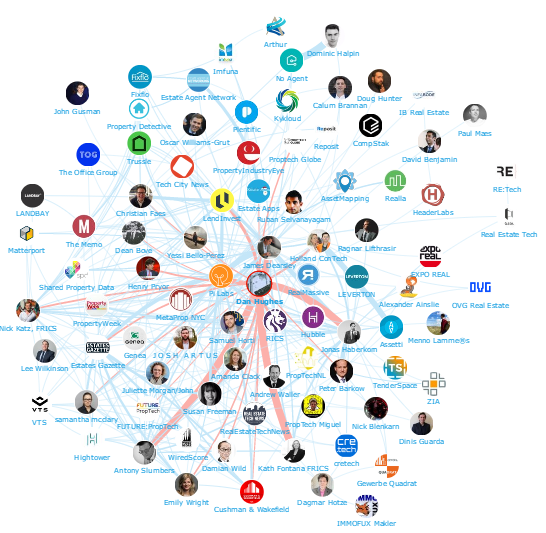 Below you can see another network map created with our Influencer Relationship Management software (IRM) showing the number 1 brand RICS at the centre and all the robotics conversations to and from the influencers in their field. If you are interested in learning more about identifying, managing and engaging with influencers click here to get in touch! 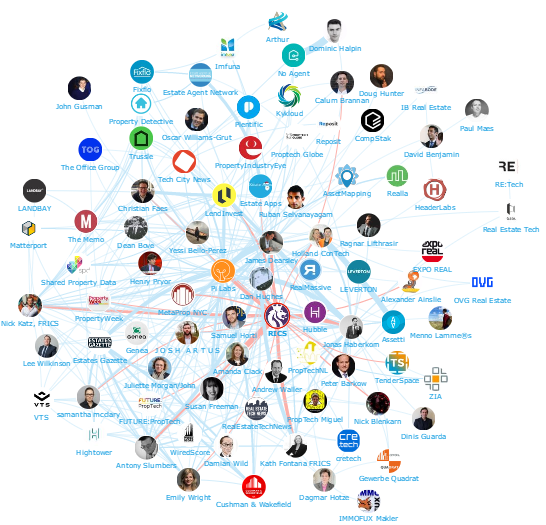 We looked at all the individuals engaging on Twitter to bring you a list of the top influencers in PropTech. Below is the top 50, if you want to see who ranks from 50-100 be sure to download the full report by clicking the download button below.

We also looked at all the brands engaging on Twitter to bring you a list of the top brands talking about proptech. Below is the top 50, if you want to see who ranks from 50-100 be sure to download the report to get the full top 100 list, and see who are most the influential brands in proptech.

Disclaimer: As ever with these lists, it must be stressed that the ranking is by no means a definitive measurement of influence, as there is no such thing. The brands and individuals listed are undoubtedly influential when it comes to driving discussion around League of Legends.

Disclaimer: As ever with these lists, it must be stressed that the ranking is by no means a definitive measurement of influence, as there is no such thing. The brands and individuals listed are undoubtedly influential when it comes to driving discussion around PropTech.