Renewable energy is energy collected from resources which are naturally replenishable, such as sunlight, wind, rain, tides, waves, and geothermal heat. Governments around the world are investing heavily in developing technologies to harness the power of clean, renewable energy sources due to their potential to produce large quantities of energy without generating greenhouse gases, which can contribute to climate change. Investment in renewable energy has increased to $286bn (£198bn), with solar energy accounting for 56% of the total and wind power for 38%, more than double the amount spent on new coal and gas-fired power plants according to the Renewables Global Status Report.

“The age of fossil fuels is over. As we act to curb a growing climate crisis and move to a 100% renewable energy future let’s ensure we prioritize projects that are either wholly or partially owned by communities, municipalities, farmer associations, and Indigenous Nations. Let’s move to renewables in a way that ensures more equality and justice for everyone. A better world is possible. Let’s speed her arrival.”

Mike Schreiner – Leader of the Green Party of Ontario

“Renewable energy is transforming our economy—creating jobs, generating wealth and reducing carbon pollution. Community-based renewable energy is also democratizing our energy systems. People now have the opportunity to turn their homes into mini power plants generating clean power for themselves and their neighbours. I’m excited to promote this energy revolution and the clean economy it will power. I’m committed to pushing for policies that support the transition to renewable energy and reduce the risks of the climate crisis.”

“I am an Australian Barrister who played a key role in the successful campaign to responsibly close and rehabilitate one of Australia’s most polluting coal mines and plants at Anglesea on Victoria’s iconic Great Ocean Road. Involvement in that campaign opened my eyes to the health and environmental damage caused by coal and the enormous health, environment, investment and employment upside of a move to 100% renewable energy. I now spend a significant amount of time advocating for a just transition away from fossil fuels to renewable energy. Twitter is my preferred social media platform.”

“Renewables are no longer seen as an expensive alternative, but a cost-effective source of power that can save businesses and consumers money, and are, of course, a key lynchpin in stemming the risks from climate change. Despite the current two-year slump in oil prices, renewables have reached cost parity with conventional fuels. In developed countries, clean energy is creating jobs and helping cities and major corporations operate cleaner and more efficiently; in developing countries, they are expanding energy access and economic opportunities to citizens who have long lacked access to their nations’ energy grids.”

“In Europe, the transition towards more energy efficiency and renewable energy is gathering momentum. The age of polluting and inflexible energy is drawing to an end. Heat, power and transport will increasingly be provided by renewables. Even big oil gets a taste for renewables! Yet, we still have a long way to go. Investments in renewable energy in the EU dropped. Retroactive changes and the lack of pipeline visibility for the post-2020 period are tarnishing the EU’s reputation as a safe investment hub whilst emerging economies position themselves as attractive alternatives. The historic Paris climate agreement gave investors a clear signal that high-emissions assets are not viable in the long run and that the transition towards a renewable-based economy should be accelerated. For the EU, a reasonable assumption is that a near zero-emission economy must be delivered by 2050. The EU yet needs to translate its Paris climate commitment into domestic policy. EU Member States will need to increase their collective climate pledge for 2030 and step up renewable energy deployment efforts. We need an ambitious renewable energy package that fosters a vibrant home market with clear growth perspectives and that asserts the EU’s leadership in renewables.”

“Clean energy is on the decline and unless something changes the situation is about to get much worse. Over the last 20 years, electricity globally from low carbon energy sources declined five percentage points, an amount of electricity equal to that produced by 62 nuclear plants the size of California’s endangered Diablo Canyon, or 900 of the world’s largest solar farm, California’s Topaz. Renewables are not making up for lost nuclear at global or national scales. Globally, wind and solar barely made up half of the absolute decline of nuclear over the last decade. Nationally, and at regional levels, nuclear is replaced overwhelmingly by fossil fuels, not renewables. Nuclear is suffering because of policy discrimination. Solar and wind receive 140 and 17 times more in subsidies. And nuclear is excluded from state renewable portfolio standards. That should change. Given nuclear’s decisive role in determining whether electricity globally carbonizes or re-carbonizes, what happens to today’s nuclear plants may be the single largest factor for determining future warming. We should stop picking winners and losers and allow all sources of clean energy — solar, wind, nuclear, hydro, fossil with carbon capture and storage — compete on a level playing field.”

Assaad Razzouk – CEO of Sindicatum
“We will need to invest $16.5 trillion in renewable energy by 2030 to ensure we don’t exceed the 2 degrees milestone now enshrined in the Paris Agreement.  This amount of money will only be forthcoming when the capital markets understand that their fiduciary duty includes analysing the long term risks caused by the exploration and production of fossil fuels. This can shift a mountain of investments from dirty to clean energy through the process of re-allocating risk premiums to fossil fuel investments instead of clean energy.”

Kees van der Leun – Managing Partner Strategic Consultancy at Ecofys
“Achieving a 100% renewable global energy supply before 2050 is possible and affordable, as we’ve shown in The Energy Report, with WWF. And given the momentum that energy efficiency and renewables already have, and all the other benefits that such a transition would bring, it may well be our best option to address climate change too. Access to energy, greatly reduced air pollution, more local jobs, less geopolitical tension; those can all be achieved in this great transition, global in scope, and tailored by region!”

Dan J Cass – Strategist at The Australia Institute
“People love renewables. Renewable energy is at a cultural and political tipping point. Over the past year it has finally overtaken all other energy sources, as measured by investment in new generation capacity. Now it is entering the cultural mainstream and everyone is talking about batteries and smart grids and electric vehicles. Our polling shows remarkable public passion for clean energy and support for parties that promote deep and rapid transition away from fossil fuels. The Australia Institute published a report on battery storage and an article about it was shared over 3000 times in less than 24 hours – that’s amazing for such a new and nerdy issue. Renewables are the core of any sensible strategy for climate action. Renewable energy is more popular than carbon markets and thus more powerful politically. It is also more tangible as an economic lever. It produces tangible benefits for local communities in the form of jobs and infrastructure you can see and touch, such as solar panels and windmills.”

We were interested in seeing which topics were most popular among the top renewable energy influencers, so we analysed their tweets and blogs from 1st January – 31st May 2016 and counted mentions of various topics associated with renewable energy, which we then used to create a topic share of voice chart. It is important to note that this does not include sentiment analysis, so negative mentions of coal for example will still count towards the topic share of voice. 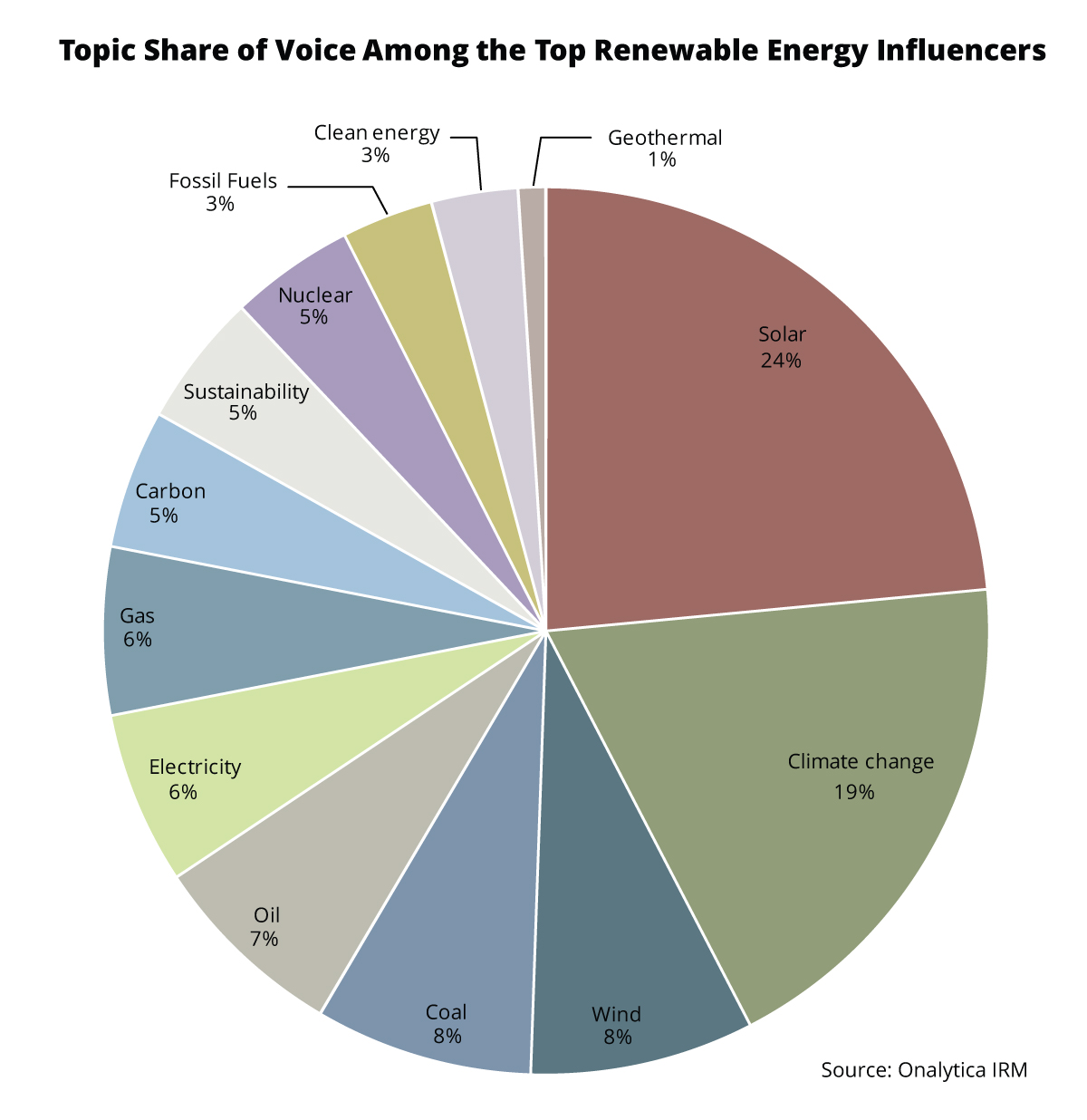 We were very interested in seeing which renewable energy professionals and brands were leading the online discussion, so we analysed  769K+  tweets from 24th February – 23rd May 2016 mentioning the keywords: “renewable energy” OR renewables OR renewableenergy”. We then identified the top 100 most influential brands and individuals leading the discussion on Twitter. What we discovered was a very engaged community, with much discussion between individuals and brands. Below you can see a network map of the online conversation with the number 1 brand Greenpeace at the centre. This map was created with our Influencer Relationship Management software (IRM). Be sure to click on the map to enjoy the full size network diagram in greater detail. 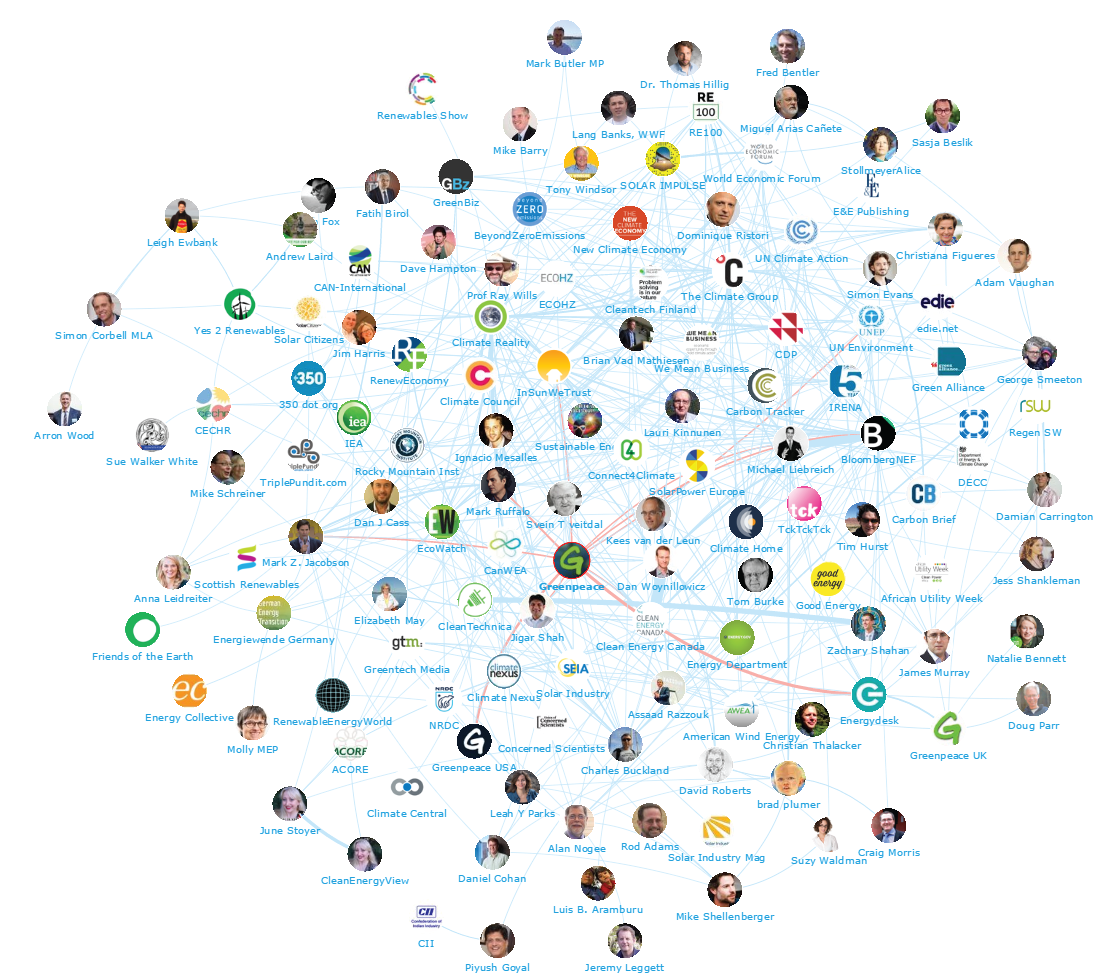 Below you can see another network map created with our Influencer Relationship Management software (IRM) showing the #1 influencer June Stoyer at the center and the conversations to and from the influencers in her field: 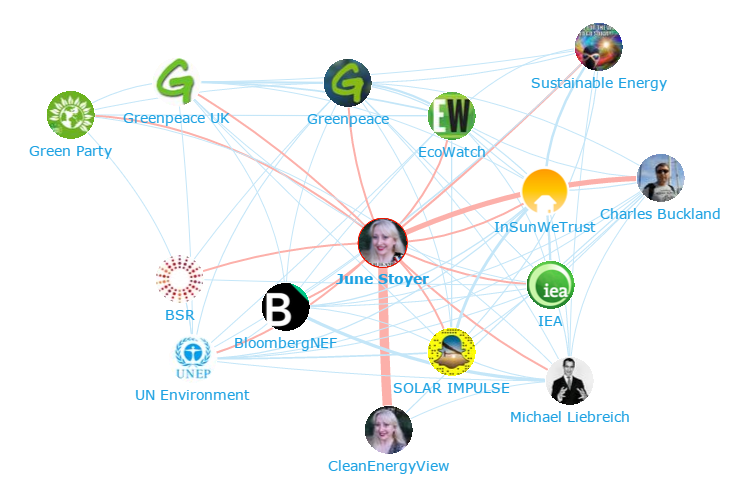 Here is another network map highlighting the #27 brand BloombergNEF, and the conversations to and from the different influencers in their field. If you are interested in learning more about identifying, managing and engaging with influencers click here to get in touch! 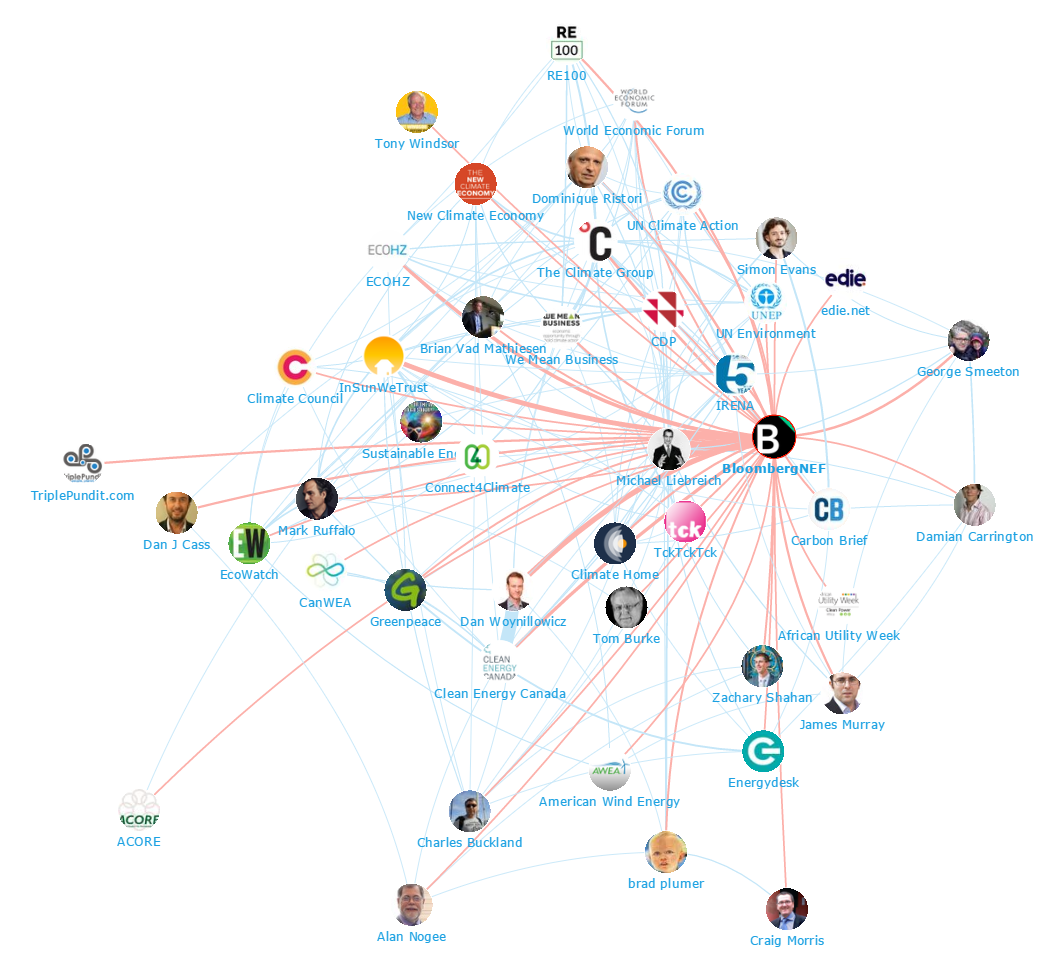 We looked at all the individuals engaging on Twitter to bring you a list of the top influencers in renewable energy. We found a rich mix of teachers, bloggers, enthusiasts, authors, keynote speakers and professionals. Below is the top 50, if you want to see who ranks from 50-100 be sure to download the full report by clicking the download button below.

In the top 100 brands we can find a great selection of organisations such as Greenpeace, the World Economic Forum and the UN, as well as industry resources such as EcoWatch and Solar Industry Mag. Below is the top 50, be sure to download the report to get the full top 100 list, and see who are most the influential brands in renewable energy.

Disclaimer: As ever with these lists, it must be stressed that the ranking is by no means a definitive measurement of influence, as there is no such thing. The brands and individuals listed are undoubtedly influential when it comes to driving discussion in the renewable energy debate.