Robotics is the branch of science consisting of a diverse range of technologies including mechanical engineering, electrical engineering and computer science. Robotics covers the design, construction, operation and use of robots, as well as computer systems for their control, sensory feedback and information processing. The aim of robotics is to create interactive, cognitive and automated systems that can extend human capabilities to solve real world challenges.

There are four main types of robots:

With rapid advancements in technology, robots are becoming more sophisticated and able to assume more roles such as personal assistants, delivery vehicles, surgical assistants, exoskeletons, autonomous vehicles and unmanned aerial vehicles. As a result investments in robotics start-ups have risen substantially, and according to a market research report the service robotics market is estimated to reach USD $18.02 Billion by 2020.

We reached out to some of the top influencers on our list to ask them for their views on future of work. We spoke to Mike Quindazzi (#6), Jason Schenker (#8), Spiros Margaris (#10), Dr. Bertalan Mesko, PhD (#17), Patrick Meier (#18) and Zoltan Istvan (#20). Be sure to follow them to stay up to date on the best content and resources on robotics.

Mike Quindazzi – Business Development Leader and Management Consultant at PwC
“When I think about robotics, I think about man-made machines comprised of hardware and software… and increasingly from programs alone (bots, robotic process automation, etc.), that aim to mimic and replace human tasks that add to our productivity or enhance our entertainment. For the last 50 years, robots have served us well handling the most dangerous, dirty and dull tasks, primarily in manufacturing operations. Today, the robot market, which has grown strong in industrial applications, is poised for expansion in a number of areas including services (hotel porter), food (robo-chefs), wealth management (robo-advisors), healthcare (surgical robots), sales & marketing (chatbots), defense (military drones), transportation (self-driving vehicles), retail/wholesale (pick & pack) and many more infused with artificial intelligence and working alongside humans in producer/performer teams. Additionally, Robotic Process Automation (RPA), sometimes misinterpreted due to the absence of robots, is simply software that is a powerful enough to perform manual, time-consuming, rules-based office tasks more efficiently by reducing cycle time and at lower costs than other automation solutions. PwC estimates that 45% of these work activities can be automated, and this automation would save $2 trillion in global workforce costs. Although RPA is still a relatively new application, early adoption by leading companies shows that by redefining work processes and reassigning employees to higher value activities, by reducing cost and human errors, and by increasing compliance and efficiency, RPA can take companies to the next level of productivity optimization.”

“Robotics is a critical, evolving industry that is likely to prove relatively evergreen for decades to come, regardless of economic climate. The disruptive nature of robotics presents unprecedented opportunities to improve the quality of life for millions (if not billions) of people in the coming decade. We see huge opportunities for productivity, growth, and wealth creation. But there are risks; individuals exposed to a widening of the skills gap are at risk. Increasing training, education and professional opportunities in the field of robotics will be critical for the U.S. workforce — and keeping the actual and perceived net benefits of robotics uniformly positive.”

Spiros Margaris– Founder of Margaris Advisory
“Robotics in some form and shape has fascinated me since my childhood, when I played with robot tin toys and watched them in science fiction movies. Much of the progress in science flows in some form into robotics and their technological advancement. When it comes to human-like robots, we seem to seek an extension of ourselves but only stronger, more efficient and smarter or someone/something to fill the void in our loneliness. Taking a look at the fintech industry we see how the robo-advisors (professional automated algorithm-based wealth management services) are changing the way the game in investment advice is played and, more importantly, how the game will be played out. I firmly believe that the robotics industry will continue to ignite our fantasies for the rest of our lives and for generations to come. That is a good thing for all of us because it will help advance science and hopefully help humans lead a safer and better life.”

Dr. Bertalan Mesko, PhD – The Medical Futurist (Healthcare Speaker, Author & Consultant)
“While there are concerns for machines replacing people in the workforce, the benefits are tempting. Imagine how a machine that doesn’t need sleep or food, doesn’t have prejudices that we humans so often have could change the way we treat people who are sick and vulnerable. With some preparation and forethought, we can make sure the human touch stays relevant in medicine while taking advantage of our metallic allies. Change is often scary, and robotics in healthcare is a big one. It has the potential to do so much good: to bring medical care to regions where even today there is none to be found; to make the production and distribution of pharmaceuticals cheaper and more efficient; to lighten the load of medical professionals; to help people walk again. To reap the benefits and avoid the potential dangers of such a technological revolution we need to keep informed about the strides that science makes so that we can better prepare and adapt to the not-so-distant future where robots play a crucial role and work closely with us.”

“The International Community spends around $25 Billion per year to provide life saving assistance to people devastated by wars and natural disasters. According to the United Nations, this is $15 Billion short of what is urgently needed; that’s $15 Billion short every year. So how do we double the impact of humanitarian efforts and do so more efficiently than ever before? The answer is robotics.”

“I recently consulted with the US Navy on all things “transhuman.” In those conversations about how science and technology can help the human race evolve beyond its natural limits, it was clear that military is keen on replacing human soldiers with both fighting and peacekeeping machines so American military lives never have to come under fire or be in harm’s way. However, it’s the peacekeeping technology that is particularly interesting for many civilians. While you wouldn’t want an armed Terminator in your home, you might like a robot that travels with you and offers personal protection, like a bodyguard. In a survey by Travelzoo of 6,000 participants, nearly 80 percent of people said they expect robots to be a significant part of their lives by 2020 — and that those robots might even join them on holidays. The idea of a protective robot nanny is an idea whose time has come.”

We were interested in seeing which topics were spoken of the most in the context of robotics, so we analysed tweets and blogs from the top 100 influencers and brands between 1st January – 22nd November 2016 and counted the number of times various topics were mentioned to create a topic share of voice pie chart: 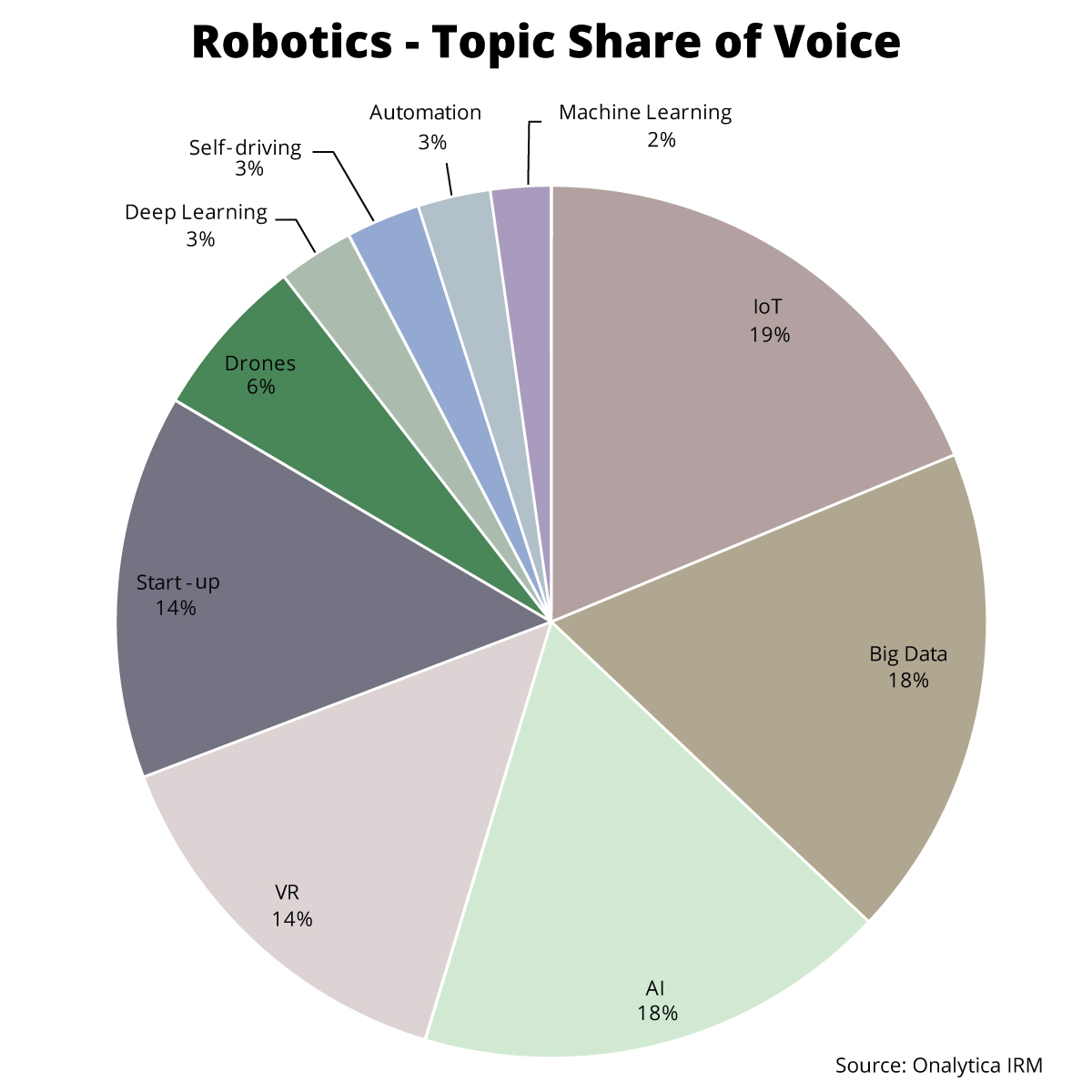 We were very interested in seeing which brand and individuals were leading the discussion around robotics, so we analysed over 551K tweets mentioning the key words: “Robotics OR Robotic from 18th September – 18th November 2016. We then identified the top 100 most influential brands and individuals leading the discussion on Twitter. What we discovered was a very engaged community, with much discussion between individuals and brands. Below you can see a network map of the online robotics conversation with the number one influencer Will Knight at the centre. This map was created with our Influencer Relationship Management software (IRM). Be sure to click on the map to enjoy the full size network diagram in greater detail. 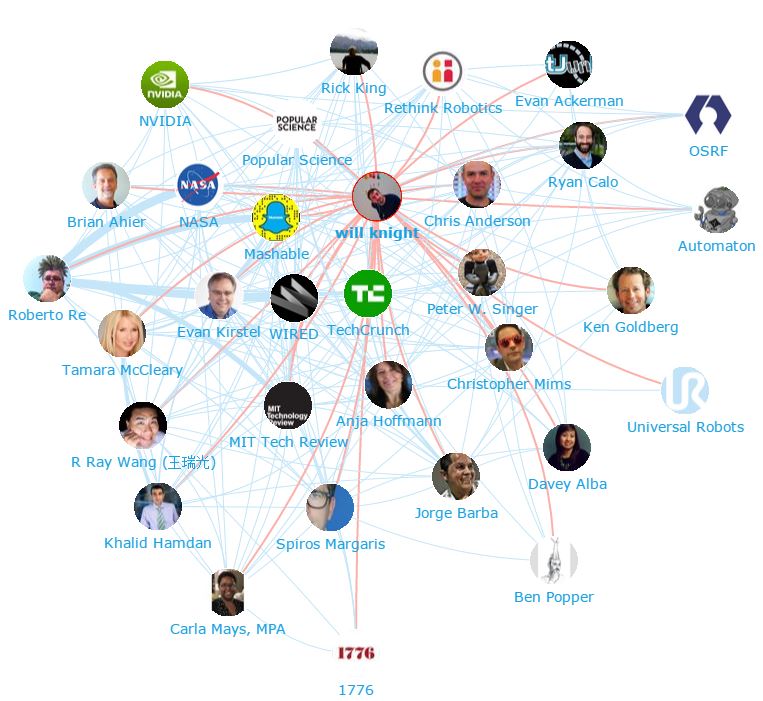 Below you can see another network map created with our Influencer Relationship Management software (IRM) showing the number 1 brand NASA at the centre and all the robotics conversations to and from the influencers in their field. If you are interested in learning more about identifying, managing and engaging with influencers click here to get in touch! 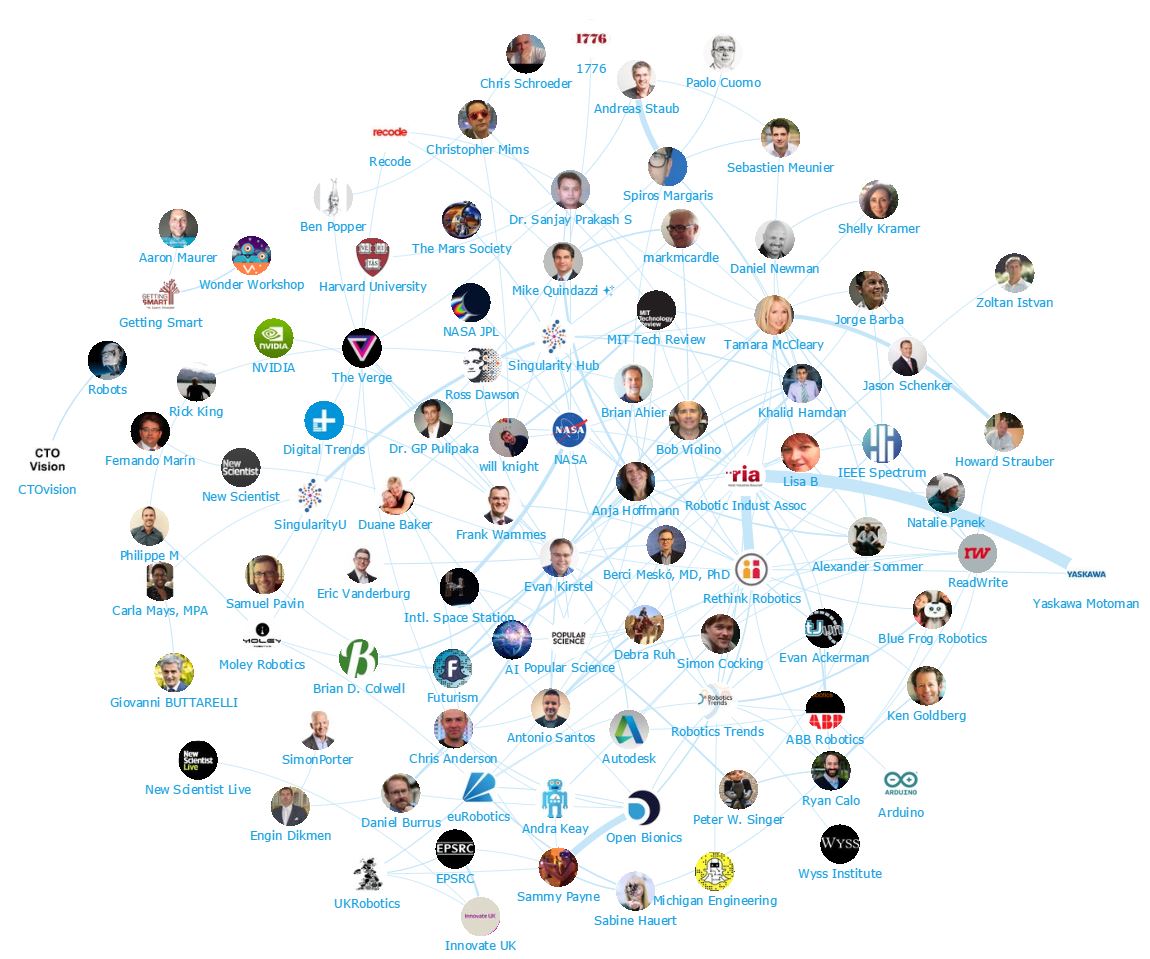 We looked at all the individuals engaging on Twitter to bring you a list of the top influencers in robotics. Below is the top 50, if you want to see who ranks from 50-100 be sure to download the full report by clicking the download button below.

We also looked at all the brands engaging on Twitter to bring you a list of the top brands talking about robotics. Below is the top 50, if you want to see who ranks from 50-100 be sure to download the report to get the full top 100 list, and see who are most the influential brands in robotics.

Disclaimer: As ever with these lists, it must be stressed that the ranking is by no means a definitive measurement of influence, as there is no such thing. The brands and individuals listed are undoubtedly influential when it comes to driving discussion around robotics.