Sunday 7th February 2016 saw one of the biggest sporting events in the world take place, the Super Bowl, where the Denver Broncos took on the Carolina Panthers at the Levi’s Stadium, in Santa Clara, California. This year was even more special as it was also the 50th Super Bowl.

Advertising at the Super Bowl is taken very seriously, with some ads being compared to watching a movie premiere at Sundance Film Festival, but for as much as $5 million a pop for one 30 second slot, advertisers have a very small window to sway their audience of more than 100 million people. That’s why modern day Super Bowl advertising means more brands delivering integrated, multi-platform campaigns, rather than just an advert. With a reported 840 million minutes of Super Bowl adverts viewed on YouTube last year, it’s true to say that Super Bowl adverts really continue to live on long after the game. Brands are not just picking celebrities to star in their commercials any more, they’re checking to see if their celebrities are also social media influencers who can amplify their message. One way of measuring the success of a campaign is to measure the number of mentions a brand receives. We looked at total brand mentions before, during and after the Super Bowl to produce a trend line of mentions. 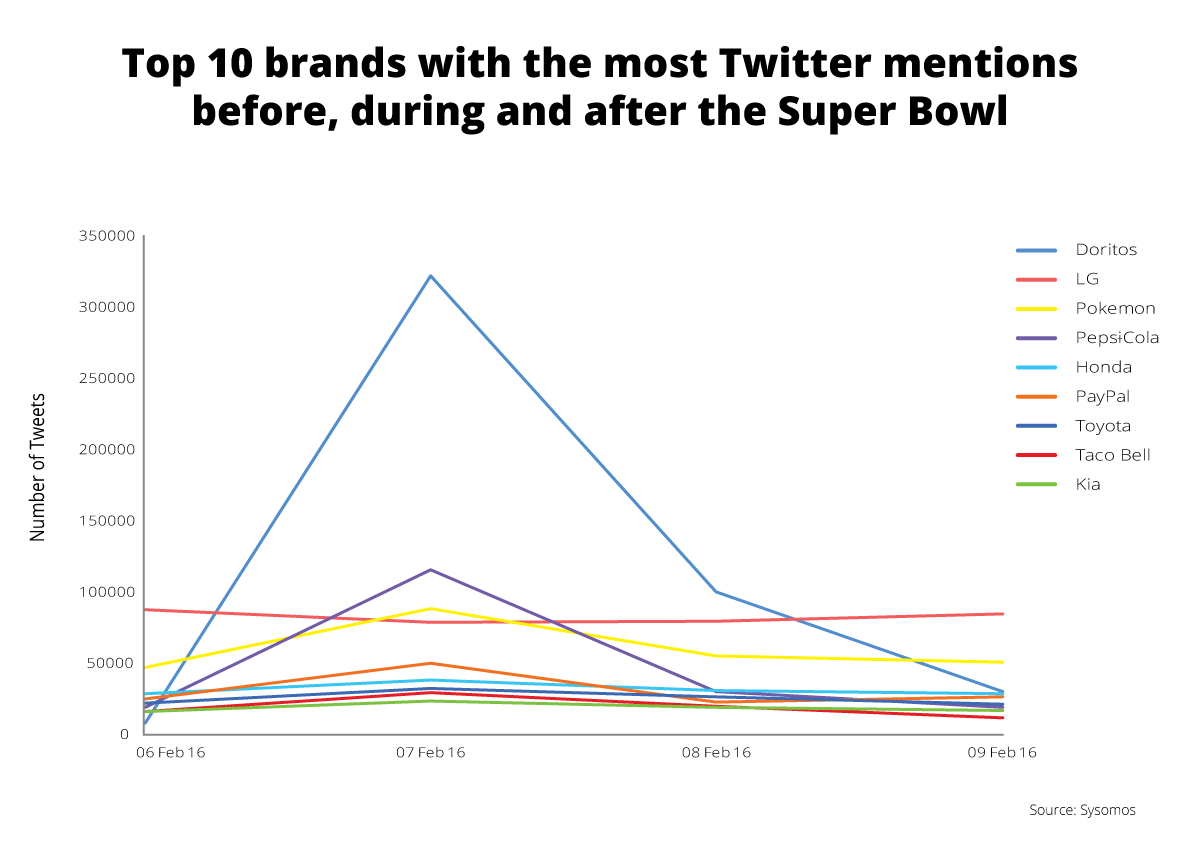 Doritos received the most mentions but for contrasting reasons. Their 60 second advert with an expecting father having fun with the ultrasound of his unborn baby craving a chip, the fetus then propels itself out of its mother’s womb to get its hands on the snack. Some saw the funny side of this while others took offence to the idea of an extremely premature birth.

Another way of seeing how successful a campaign was is to measure who had the biggest share of voice in Super Bowl conversations. We analysed all the advertisers tweets containing the keywords “super bowl 50” OR superbowl50 OR sb50 OR “super bowl” from Saturday 6th – Monday 8th February  to produce a Share of Voice chart illustrating which advertisers were leading the Super Bowl conversations: 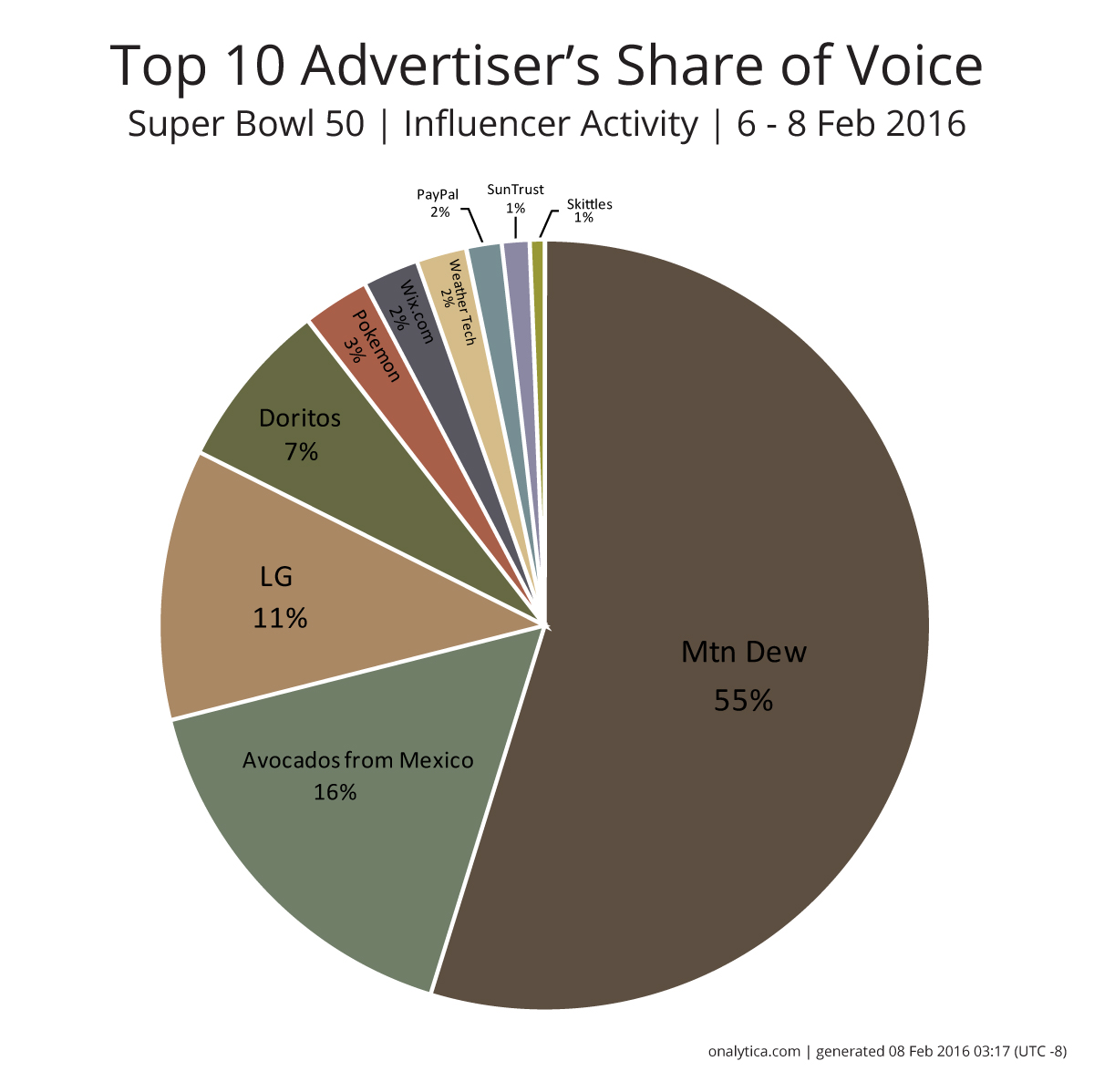 Among the advertisers, Mountain Dew dominated the Super Bowl conversations with their bizarre advert featuring a hybrid creature called ‘Puppy Monkey Baby’ promoting a new beverage called Kickstart, that combines Mountain Dew, juice, and caffeine — a hybrid of three “awesome” ingredients according to the ad. This sparked so much conversation on Twitter that it became the 3rd most trending topic behind a promoted hashtag by pepsi and the Super Bowl’s official hashtag.

YouTube offered many companies the option to get their videos out in advance this year with the aim of ensuring more views during the barrage of The Big Game itself. This year the top trending ads on YouTube based on views (as of 2/8 3a.m. ET) were:

We were very interested in seeing which Super Bowl brands and individuals were leading the online discussion, so we analysed 1.6M+ tweets from 6th to 8th February 2016 and identified the top 100 most influential brands and individuals leading the discussion on Twitter. What we discovered was a very engaged community, with much discussion between individuals and brands. Below you can see a network map of the online conversation with the number 1 brand NFL at the centre. This map was created with our Influencer Relationship Management software (IRM). Be sure to click on the map to enjoy the full size network diagram in greater detail. 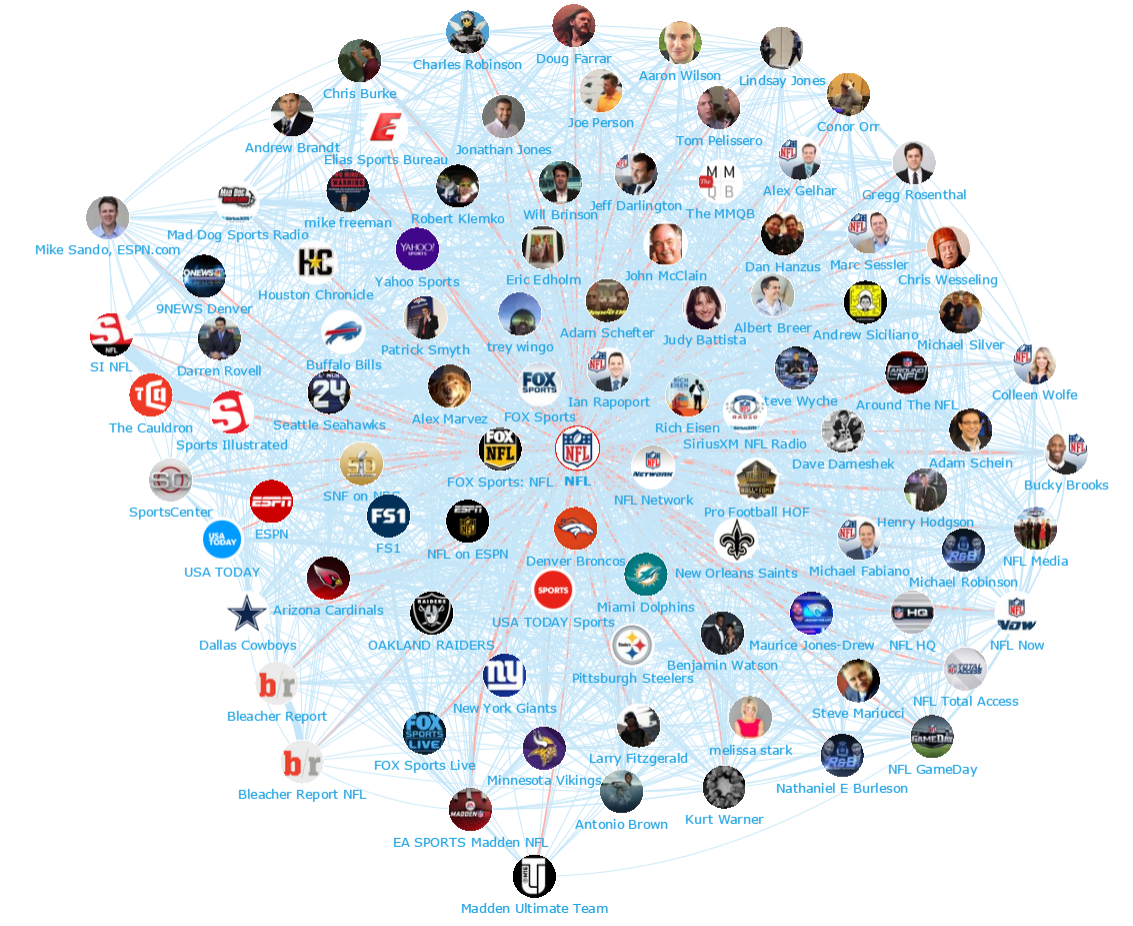 Below you can see another network map created with our Influencer Relationship Management software (IRM) showing the #1 influencer Darren Rovell at the centre, and the conversations to and from all the different influencers in his field. If you are interested in learning more about identifying, managing and engaging with influencers click here to get in touch! 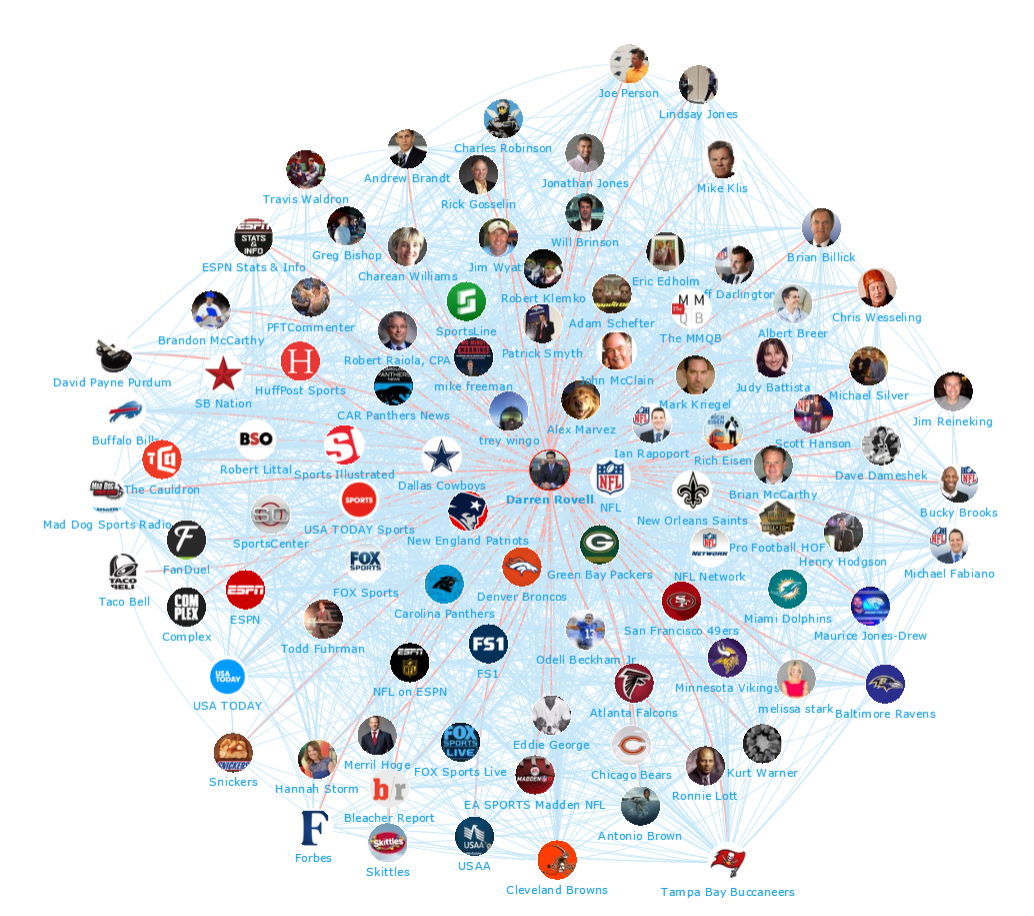 We looked at all the individuals engaging on Twitter to bring you a list of the top 100 most influential individuals at the Super Bowl. Be sure to hit the button below to get the full top 100 list!

In the top 100 brands TV networks like NFL Network, ESPN, and CBS featured highlt, as well as TV shows like Sports Center. We can also find a great selection of official team handles such as the Denver Broncos, the Carolina Panthers and the Pittsburgh Steelers. Also represented are digital media company such as Bleacher Report and SB Nation as well as the advertisers.

Disclaimer: As ever with these lists, it must be stressed that the ranking is by no means a definitive measurement of influence, as there is no such thing. The brands and individuals listed are undoubtedly influential when it comes to driving discussion in the Big Data debate.