Sponsors at the Super Bowl 51: Top 100 Influencers and Brands

Sunday 5th February 2017 saw one of the biggest sporting events in the world take place; the Super Bowl, where the New England Patriots took on the Atlanta Falcons at the NRG Stadium, in Houston, Texas.

Advertising at the Super Bowl is taken very seriously, with some ads being compared to watching a movie premiere at Sundance Film Festival, but for as much as $5 million a pop for one 30 second slot, advertisers have a very small window to sway their audience of more than 100 million people. That’s why modern day Super Bowl advertising means more brands delivering integrated, multi-platform campaigns, rather than just an advert. With a reported 840 million minutes of Super Bowl adverts viewed on YouTube, it’s true to say that Super Bowl adverts really continue to live on long after the game.

We wanted to see how successful the campaigns were in terms of driving engagement on social media so we analysed all the tweets mentioning the keywords “SB51 OR #Superbowl OR SBLI” in conjunction with all the names of the sponsors to produce a brand share of voice chart: 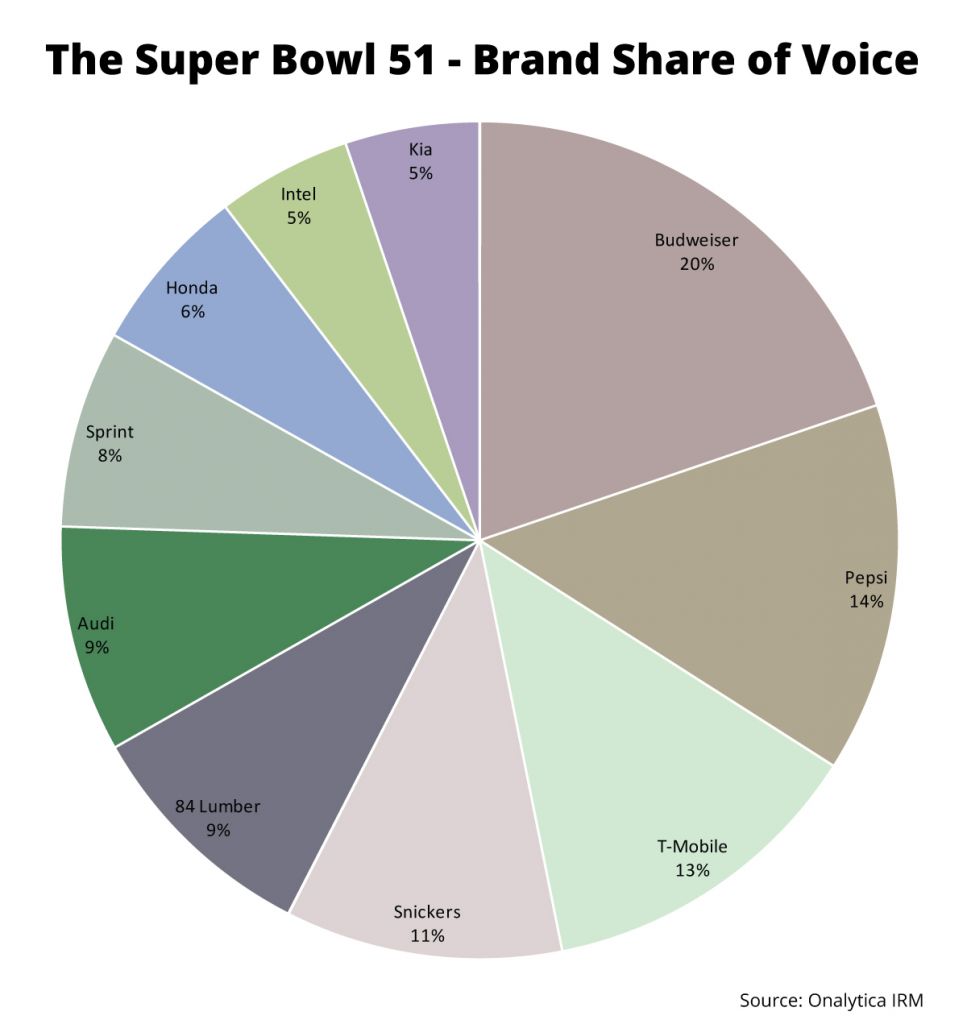 Budweiser sparked the highest number of brand mentions among the top influencers and brands with their politically charged commercial following the narrative of an immigrant overcoming discrimination and achieving success. Pepsi received the second highest share of brand mentions among the top influencers with their sponsorship of the halftime show featuring lady Gaga, for which they ran a competition for fans to be her ” guest of honour” and watch the show from the sidelines. They also ran an ad for their new product LIFEWTR. T-Mobile‘s “Unlimited Moves” campaigns received the 3rd highest share of voice with four commercials featuring a celebrity heavy cast including Justin Bieber, Terrell Owens, Snoop Dogg, Martha Stewart and Kristen Schall. Snickers received the 3rd highest share of mentions with their first live Super Bowl commercial created in real-time during the Big Game. 84 Lumber‘s ad which followed a mother and daughter’s journey from Mexico to the US sparked a lot of social conversation, giving them a 9% share of voice. Audi‘s ad tackled the issue of gender pay equality, and ignited a lot of conversation on social, not all of which was positive. Sprint took a combative approach with their advert featuring a father faking his own death to get out of his Verizon contact, with the tagline “you could’ve just switched to Sprint”. Honda received a 6% share of voice with their ad featuring a high school yearbook with celebrities reflecting the challenges they overcame to eventually become successful, fitting in with their “Power of Dreams” tagline. Intel received a 5% share of voice with conversation focusing on their synchronized aerial drones that played a starring role in the halftime show, as well as their ad that featured New England Patriots’ quarterback Tom Brady. Fianlly Kia recieved a 5% share of mentions with their ad featuring Melissa McCarthy on a mission to save whales, trees and more.

Below you can see a network map of the online conversation with the number 1 influencer Lady Gaga at the centre. This map was created with our Influencer Relationship Management software (IRM). Be sure to click on the map to enjoy the full size network diagram in greater detail. 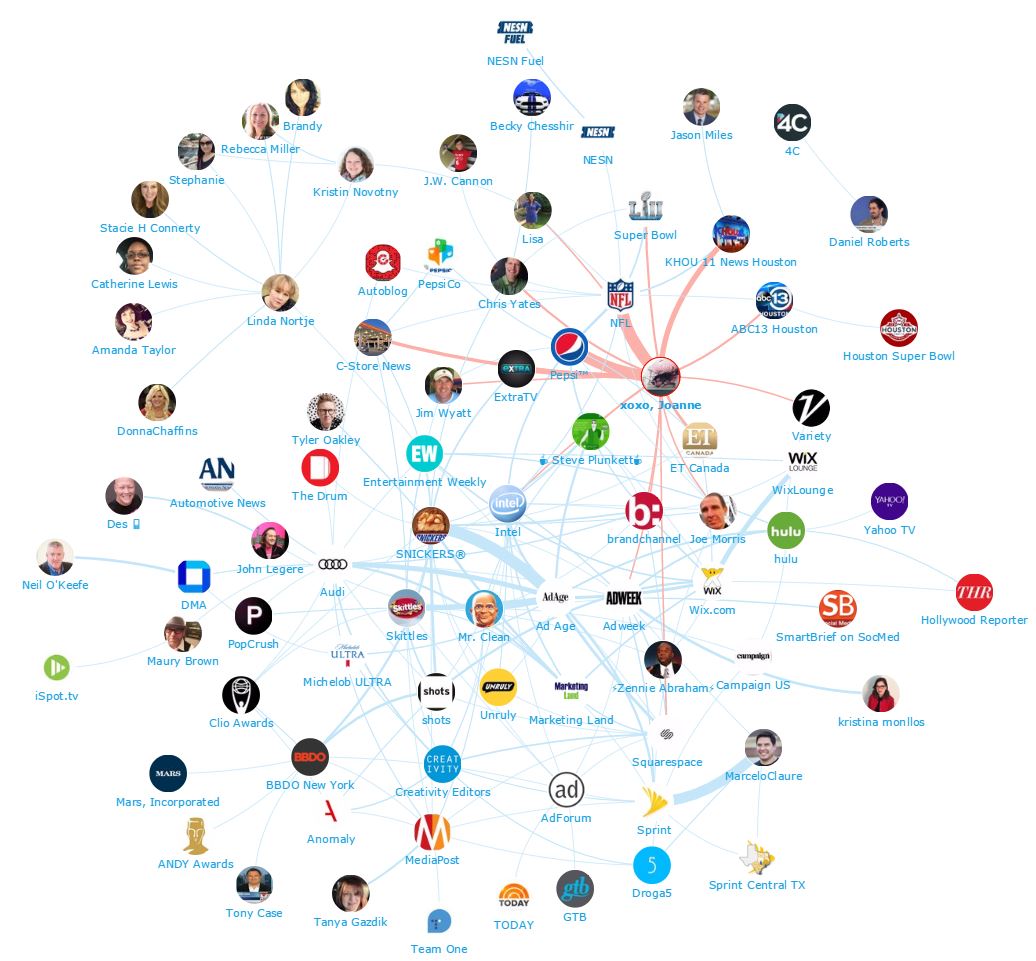 Sponsors at the Super Bowl 51: Top 100 Influencers and Brands

Below you can see another network map created with our Influencer Relationship Management software (IRM) showing the #1 brand Pepsi at the centre, and the conversations to and from all the different influencers in their field. If you are interested in learning more about identifying, managing and engaging with influencers click here to get in touch! 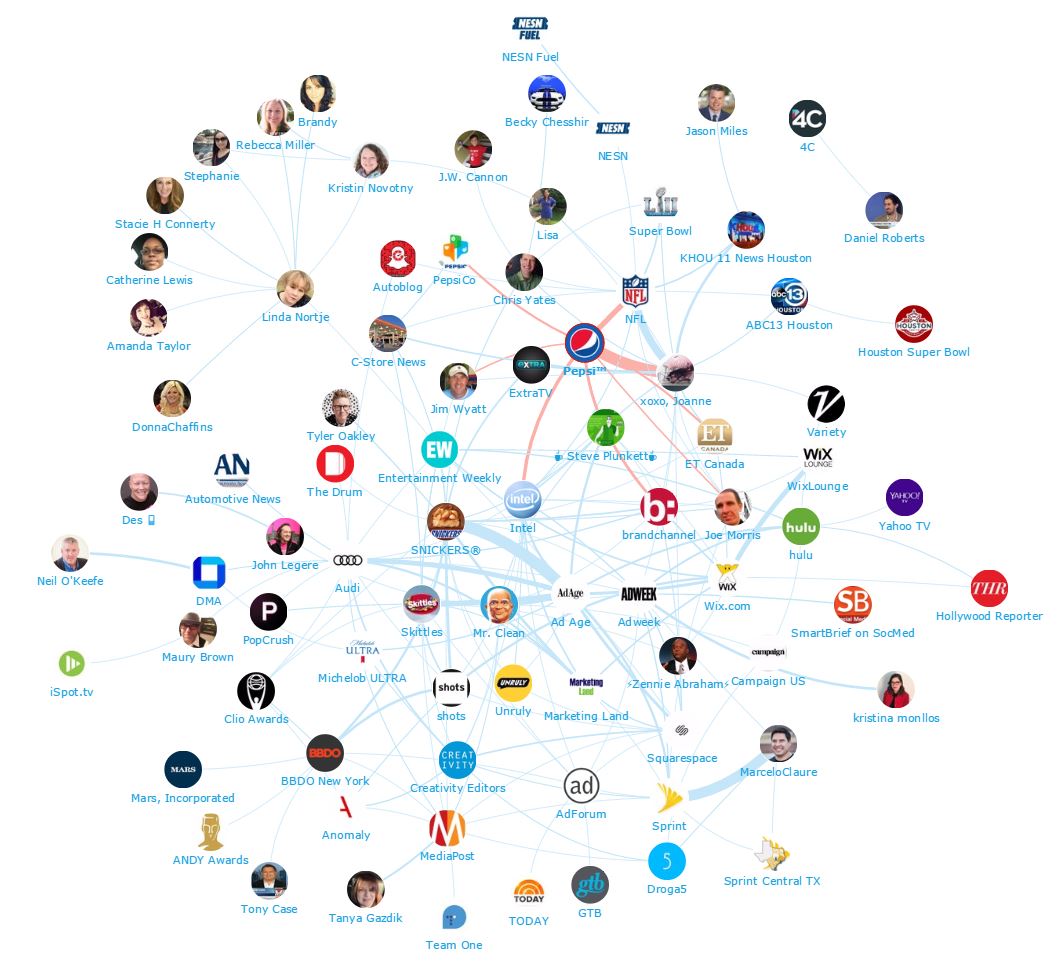 We looked at all the individuals engaging on Twitter to bring you a list of the top 100 most influential individuals talking about the sponsors at the Super Bowl 51. Be sure to hit the button below to get the full top 100 list!

Here is a list of the top 50 brands talking about the sponsors at the Super Bowl 51 on Twitter. If you want to see who ranks from 50-100 be sure to download the report to get the full top 100 list!

Disclaimer: As ever with these lists, it must be stressed that the ranking is by no means a definitive measurement of influence, as there is no such thing. The brands and individuals listed are undoubtedly influential when it comes to driving discussion around sponsors at the Super Bowl.

SPONSORS AT THE SUPER BOWL 51