With the arrival of social media and the speed at which information can now be shared and received, the list of charitable causes seems to have grown exponentially. For each injustice in the world there is a cause fighting it and people trying to improve the situation.

The benefits of working alongside influencers across all sectors are many, and with charities influencer partnerships can go from online promotion of a fundraiser, to collaborating on content or speaking at events. The possibilities are endless.

Bearing in mind the weight that the word “charity” holds and what it represents, it is no surprise that narrowing a list down to 100 influential experts is no small feat. We’ve chosen to concentrate our efforts on those that work within charitable industries, such as consultants and fundraisers, to try and get an even spread across the community. These people are influential online and involved in conversations surrounding charity and charitable events.

We analysed over 8 million charity-related posts from 1st August 2018 to 31st July 2019. We then identified the top 100 most influential individuals leading the discussion on social media. Below you can see a network map of the online conversation around charity. The top influencer John Haydon is at the centre highlighted in blue. This map was created using the Onalytica platform. The ranking analyses a variety of personas from industry experts, to social amplifiers and content creators as well as journalists and politicians so there’s quite a mix of influencers that have been identified. 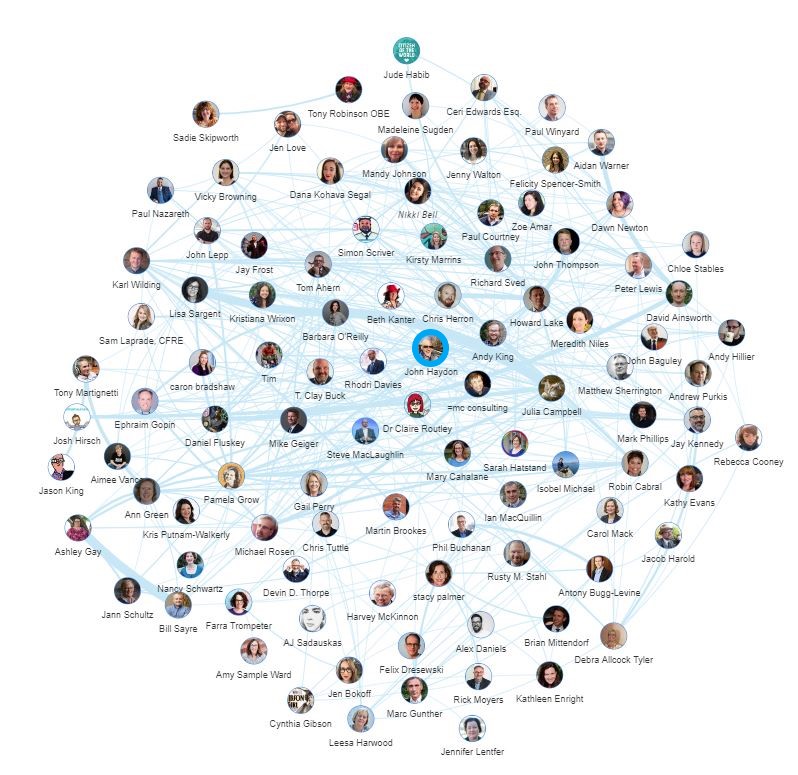 Disclaimer: As ever with these lists, it must be stressed that the ranking correlates to a strong indication of influence – however no definitive measurement of influence exists. The individuals listed here are undoubtedly influential when it comes to driving discussion around charity. Onalytica’s PageRank based methodology is used to extract influential experts on a particular topic and takes into account the number and quality of contextual references that a user receives – this allows us to identify Topical Authority (reference) – our priority influence metric. We analyzed topical authority via their social engagement on Twitter and how much influential experts were referenced in association with charity on Instagram, Facebook, YouTube, Forums, Blogs, News and Tumblr content. These calculations also take into account a user’s resonance (topical engagement) relevance (number of posts on topic, and % relevance – the proportion of their social content on the topic) and reach (number of followers). If you want to learn more, please read our article that outlines How to identify your target influencers.

At Onalytica we love building these lists and want to give back to our loyal readers as much as we can. If you’re interested in other topics (such as Virtual Reality, Digital Health, Digital Marketing) be sure to have a look on our blog or why not propose some topics to us on Twitter? Effective influencer marketing starts with identifying relevant influential experts for your brand. Onalytica’s Discovery platform mines over 200 billion posts a year into a curated database of over 700K global social media influencers, including data from Twitter, Blogs, Instagram, YouTube, Facebook, LinkedIn Profile Links + Demographic Data. Our software enables you to identify influencers by topic, demographic or content and includes real-time tracking and measurement reporting to scale your influencer relations.