Virtual reality is a computer-generated, immersive reality that provides a user with an artificial sensory experience. Virtual reality can help replicate an environment through the use of specific hardware and software, these environments can be real, such as a shop floor, warehouse or combat zone, or completely imaginary like in video games. Virtual reality has applications in education, health, entertainment, sports, science, telecommunications, military and film, and it is for that very reason the virtual reality industry is growing at such a fast pace. According to Statista, revenues from virtual reality products and software are expected to spike from just $90 million in 2014 to $5.2 billion in 2018:

VR technology has evolved dramatically in recent years, companies like Samsung, Sony, Google and Oculus and HTC are now all names associated with VR for gaming, social and mobile platforms. As with most new technology the devices are still quite expensive, so in order to give them mass appeal they would need to become more affordable. In the coming months we will see how the new tech fares with public opinion.

We reached out to some of the top 20 influencers to ask them for their views on Virtual Reality. We spoke to Daniel Corey (#2), Rob Crasco (#5), Sanem Avcil (#10), Eva Hoerth (#11), Bob O’Donnell (#14) and Brennan Spiegel (#15). Be sure to follow them to stay up to date on the best content and resources on Virtual Reality.

“My company, DangerKatt, focuses primarily on creating graphic novels and developing their transmedia potential.  Virtual Reality is opening up an entirely fresh avenue of ideation, where we can create storyworlds in traditional media and then use VR to immerse ourselves in those worlds.  Whether you’re playing a VR game based on one of our books, or actually walking through the pages of a storytelling experience, VR is giving us revolutionary and unique ways to showcase and expand our properties.”

“Virtual reality is going to change the way that we experience the world. Don’t think of it in terms of applications or games but in terms of experiences. You are going to have relationships with people that you have only ever met in VR. You will be able to relive captured experiences, like your wedding or your child’s birthday as if you were there again. You will experience real destinations around the world, from the past, or ones that are pure fantasy. I’ve laughed at live standup comedy and ran across the face of Mars with groups of people from around the world, without actually leaving my home. These experiences and others I have had in VR are as important and “real” as any other memory. We are just at the beginning of the experiential age and it’s going to be amazing.”

“Jaw dragging experiences will soon be coming in virtual reality. Virtual reality suits will allow you to basically walk around in the game world and the real world. There will be suits that enable you to feel the environment with haptic technology. These suits will be comfortable garments consisting of a jacket, pants, gloves, and boots. You will feel your senses in the these environments. Gamers will be thin and muscular in the near future.”

Eva Hoerth – Virtual Reality Design Researcher | Community Builder at Ratlab
“We are riding the wave of a new medium–that doesn’t happen very often! Every day we witness the transformation of “VRgins” to VR enthusiasts and creators, and that’s pretty damn incredible. As for the future of VR, who knows what it holds! There are so many possibilities that have yet to be explored. I wouldn’t say that VR is going to replace existing platforms, but will rather strengthen industries such as health and education that can greatly benefit from the embodied experiences that VR provides. It’s not hard to get excited about VR hardware, but the tech is going to change very quickly. So rather than trying to adapt a design to a particular type of headset, it’s more valuable to think experience first and stop to ask ourselves why we are choosing to build for VR versus other platforms? Alongside that, in order to generate a diversity of VR content, we need diverse content creators. Anyone from any gender, background, or level of expertise needs to be welcomed. I am working to bring more women into the VR/AR space and there’s already been an incredible amount of support for this initiative. The resurgence of VR is generating a ton of excitement among people from all sorts of backgrounds, and I see this as a great moment in time to embed diversity into this industry!”

“Virtual reality and augmented reality are bringing a much needed boost in excitement back to the devices and key semiconductor markets. The opportunities it enables now and, more importantly, the path towards which it is headed offers new opportunities and new experiences for consumers all over the world. There are still some tough hurdles to overcome, but it’s the kind of technology that creates a level of enthusiasm that we haven’t seen in some time.”

“Virtual reality is like dreaming with your eyes open. As a healthcare provider, I view VR as a compelling technology that opens our imagination to a new class of therapeutic interventions. At Cedars-Sinai Medical Center, we have seen first hand how VR can meaningfully reduce pain scores without any medication or drugs.  We’ve seen patients “escape” the four walls of their hospital room which, to some, can feel more like a bio-psycho-social jail cell than a place of healing. VR can temporarily transform the hospital into fantastical and healing environments. I’ve watched as patients and their families cry tears of joy during the VR experience.  Yet, there is still tremendous work ahead. Not all of our patients want to use VR, and others need highly tailored experiences that support rather than threaten their sense of self at a vulnerable time.  Our research team is actively working to solve these problems and bring VR to patients who need it the most.”

We were interested in seeing which topics were most popular among the top virtual reality influencers, so we analysed their tweets and blogs from 1st January – 11th May 2016 and counted mentions of various topics associated with virtual reality which we then used to create a topic share of voice chart: 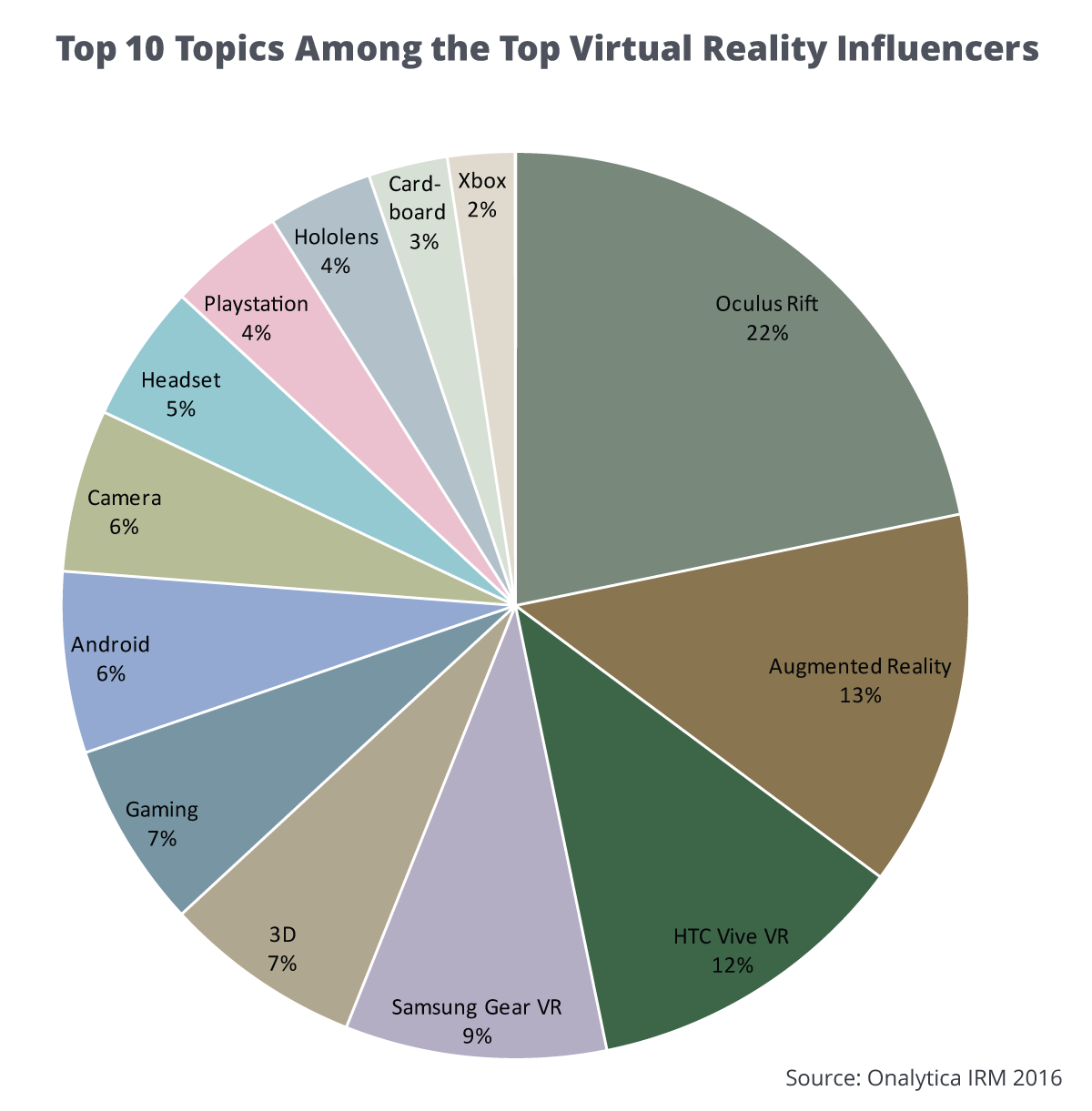 We were very interested in seeing which virtual reality professionals and brands were leading the online discussion, so we analysed  797K+  tweets from March 8th – April 7th 2016 mentioning the keywords: #VR OR “Virtual Reality” OR virtualreality. We then identified the top 100 most influential brands and individuals leading the discussion on Twitter. What we discovered was a very engaged community, with much discussion between individuals and brands. Below you can see a network map of the online conversation with the number 1 brand Oculus at the centre. This map was created with our Influencer Relationship Management software (IRM). Be sure to click on the map to enjoy the full size network diagram in greater detail. 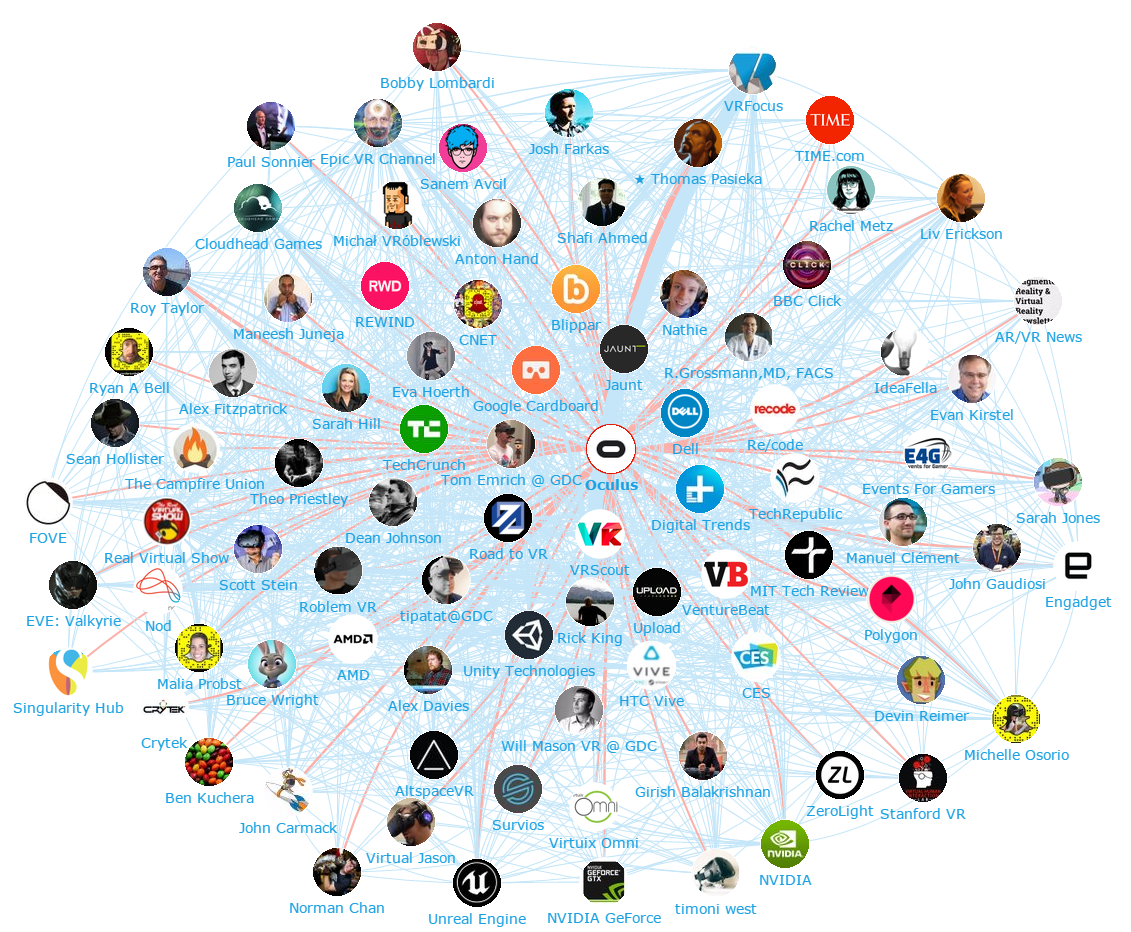 Below you can see another network map created with our Influencer Relationship Management software (IRM) showing the #2 brand HTC Vive the centre, and the conversations to and from the different influencers in their field. If you are interested in learning more about identifying, managing and engaging with influencers click here to get in touch! 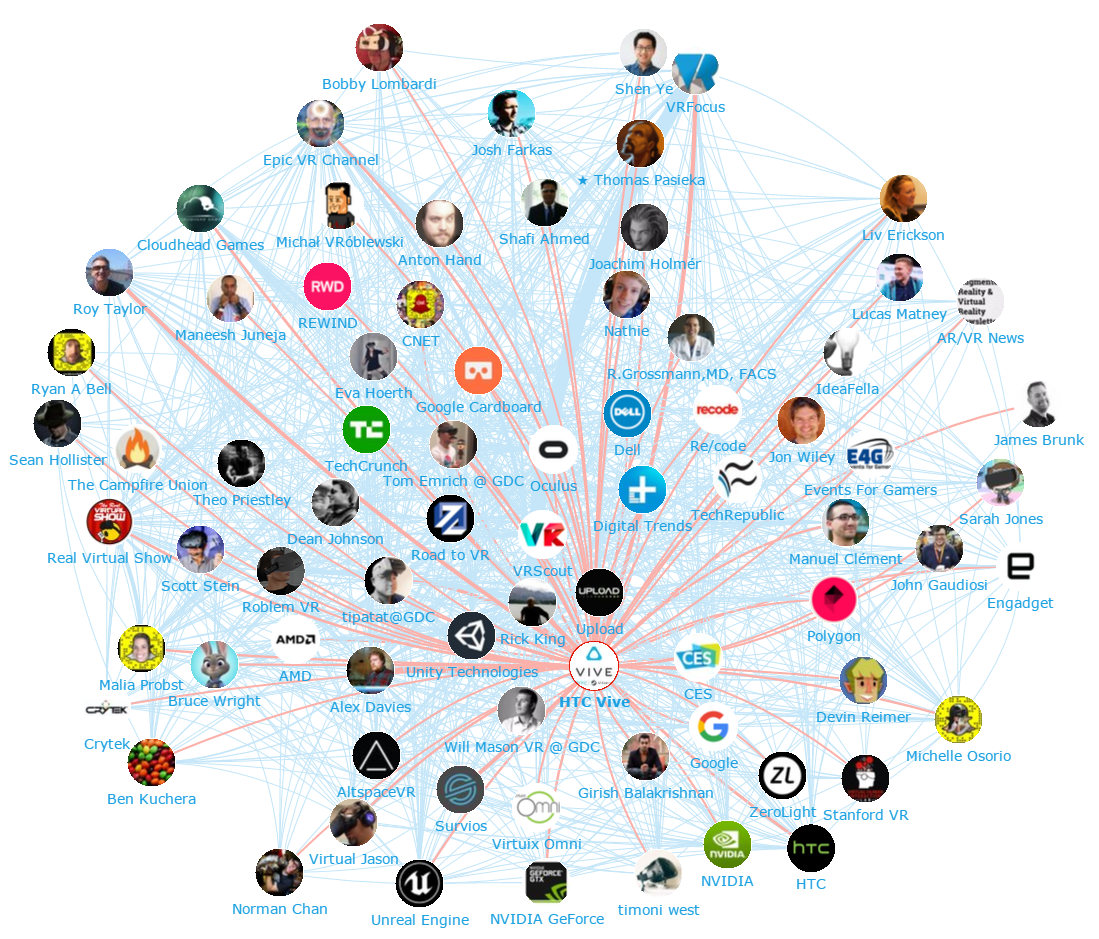 We looked at all the individuals engaging on Twitter to bring you a list of the top influencers in virtual reality. This list is a rich mix of tech journalists, developers, enthusiasts, authors, keynote speakers and also interestingly some digital health influencers. Below is the top 50, if you want to see who ranks from 50-100 be sure to download the full report by clicking the download button below.

In the top 100 brands we can find a great selection of big VR vendors such as Oculus and HTCVive, as well as some cool new startups, tech publications and industry resources. It’s interesting to note the high amount of gaming blogs and brands that appear on the list illustrating the excitement for VR in the gaming sector. Be sure to download the full analysis for free to get an idea of who are most influential virtual reality brands.

Disclaimer: As ever with these lists, it must be stressed that the ranking is by no means a definitive measurement of influence, as there is no such thing. The brands and individuals listed are undoubtedly influential when it comes to driving discussion in the Virtual Reality debate.