Faced with a growing population and climate change, the UN has warned that by 2030 the demand for water is expected to exceed supply by about 40%, with half the global population facing water scarcity.

At Onalytica we used our proprietary Influencer Relationship Management (IRM) Software to analyse the social media debate around water security, in order to identify a list of influencers and stakeholders who hold critical authority over the conversation on water security.

With so many competing sectors of society using water resources, it is becoming increasingly complex to negotiate a comprehensive plan to ensure a water secure world.

Encouragingly, social media can now be used extensively as a channel to communicate with and influence community leaders, activists, journalists, non-profit organisations, businesses, and consumers worldwide as they discuss the topic and search for ways to develop collaborative solutions.

To determine which professionals and brands were leading the online discussion on water security, we analysed 517K+ tweets from November 2015 to January 2015. After examining over 189,000 engaged individuals and brands on Twitter and in the blogosphere, we used our proprietary PageRank-based ranking system to identify the most influential brands and individuals driving engagement on water security.

Using Onalytica IRM, we uncovered valuable insight on the engagement patterns of influencers in the water security community, which may be of use to social media strategists, policy developers, politicians, businesses and consumers alike as we work together to develop collaborative solutions to ensure global security, development, and overall human well-being.

Below you can see a network map of the online engagement between our top 100 water security influencers. Be sure to click on the map to enjoy the network diagram in greater detail. 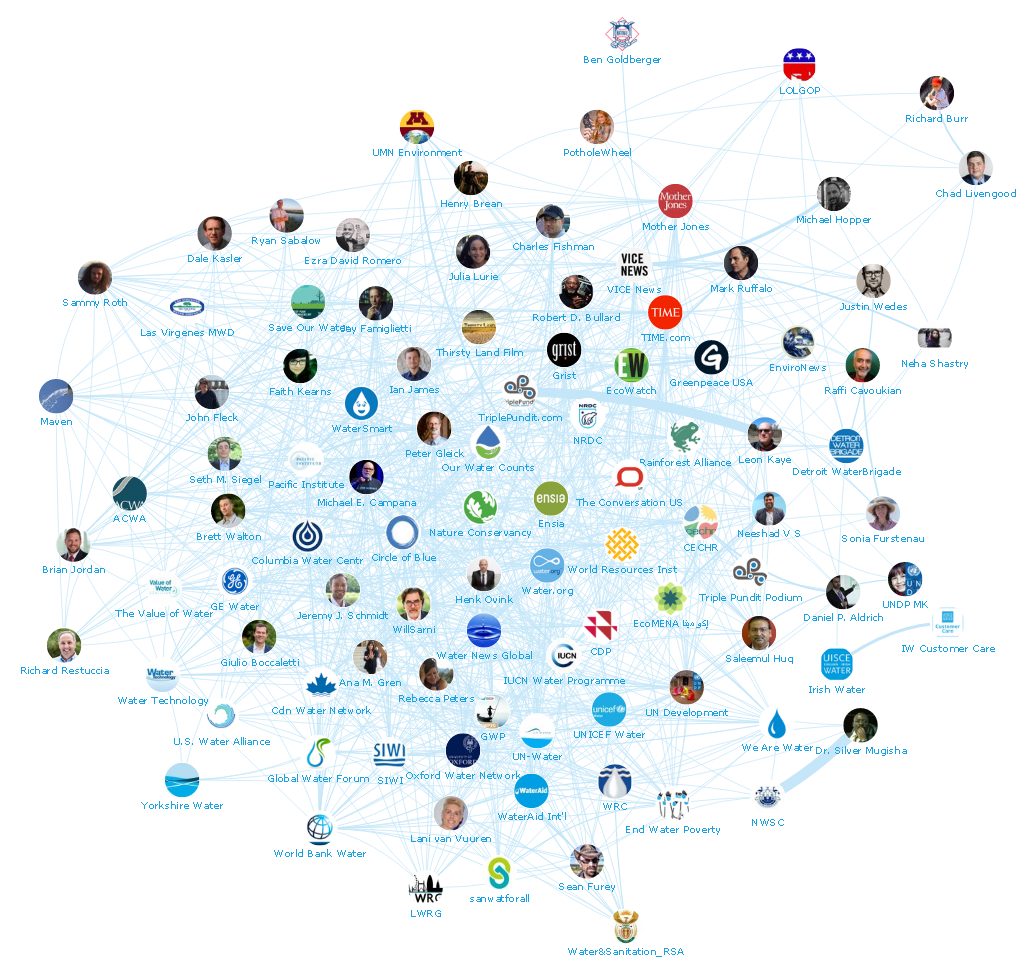 Water security influencers are highly engaged on a variety of sub-topics affecting the water security community. We determined that there were seven key subjects which dominated water influencer conversations in 2015: 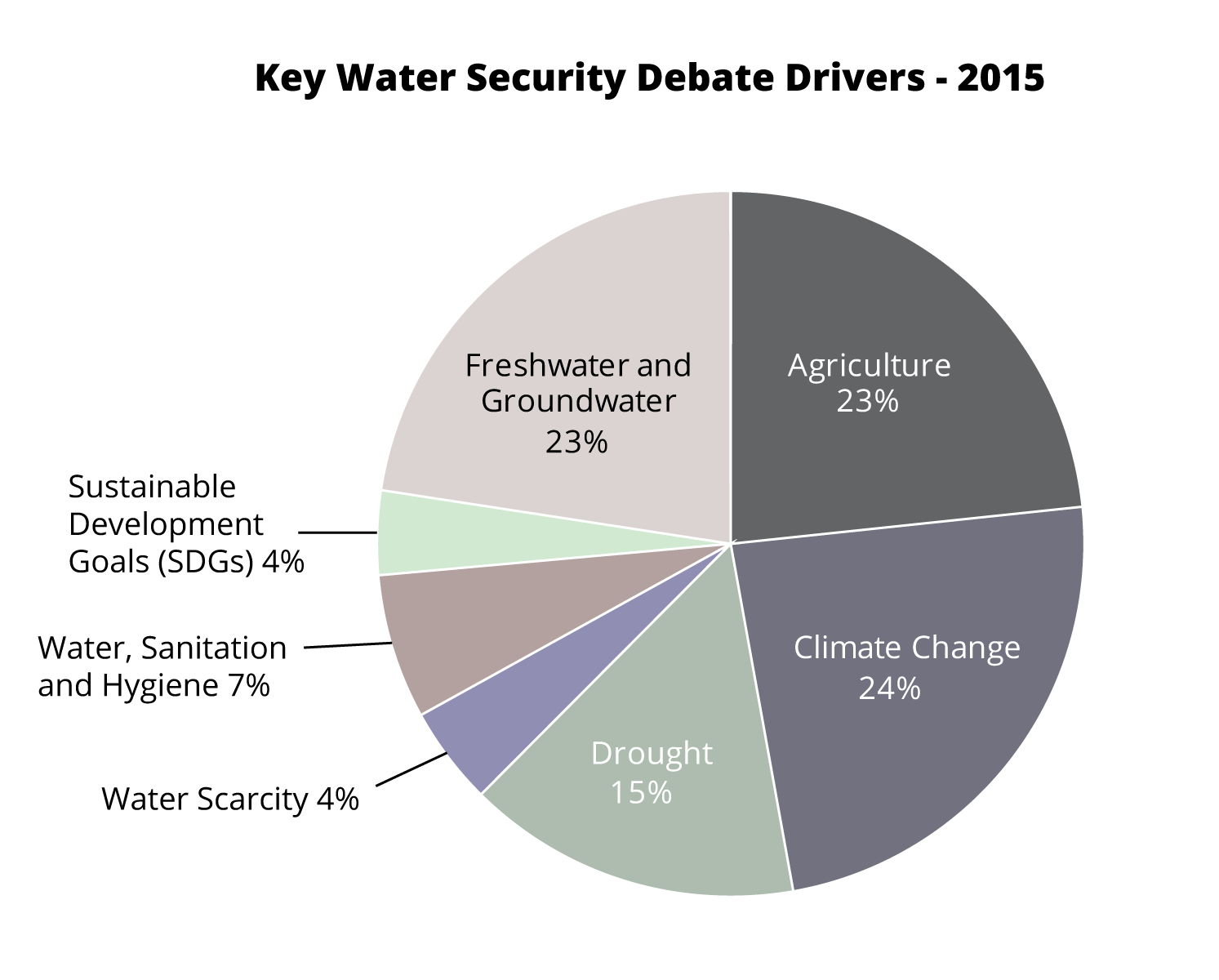 Of the seven subjects most discussed amongst water influencers, Climate Change was the largest debate driver, with water influencers posting about the subject 23,519 times in 2015. Agriculture followed with 23,024 posts by water influencers. Freshwater and groundwater accounted for 22,272 posts, while water influencers discussed drought in 15,097 posts. The remaining three subjects still played an important role in influencer conversations, together accounting for 15% of the share of voice. Water, Sanitation and Hygiene programming accounted for 6,527 mentions, most of which were by non-profit organisations. Water influencers made general references to water scarcity in 4,426 posts, while the Sustainable Development Goals (SDGs) adopted by world leaders at the UN Sustainable Development Summit in 2015 captured 3,800 mentions.

THIS REPORT (AND HOW TO USE IT)

At Onalytica we know that social media influencers wield genuine power to inform the development of public policy. The myriad of connections and interactions on social media amongst thought leaders play an important role in steering decision-making on some of the most fundamental issues in the world. This report enables communication professionals to unpack the mass debate and understand who the key water security influencers are and how to communicate with them to address the vital issue of water security.

Our in-depth analytical report on Top Water Security Individuals and Brands has been produced as a multi-part series, allowing readers to understand the flow of the debate, which topics this vital audience really cares about, and how they are driving influence on the overall debate and its subtopics. In each section of this multi-part series we will examine the chief water security debate drivers in detail, to help illustrate how our Top Water Security Individuals and Brands are interacting on each subject and shaping key debates within the community.

Stay tuned as we release in-depth insight on each of the key sub-topics deemed critical to water security influencers.

UPDATE:  The first part of this series focusing on Climate Change has been released! Click the link to read our report on Water Security Influencers and Climate Change!