Call of Duty Black Ops III is a military science fiction first-person shooter video game, developed by Treyarch and published by Activision. It is the twelfth game in the Call of Duty franchise, and the fourth entry in the Black Ops series. It was released after much anticipation on November 6, 2015 for Microsoft Windows, PlayStation 4, and Xbox One and unsurprisingly took the top spot in the charts for all platforms. In the UK 48% of physical sales were on PlayStation 4, 43% were on Xbox One, 5% were on Xbox 360 and 3% were on PS3. Call of Duty: Black Ops 3 has been ranked as the seventh-fastest selling game in the series so far, according to data collected by sales monitor Chart-Track and has earnt over $550 million in first 3 days.

We were very interested to see which influencers and brands drove the most conversation on Twitter, so we analysed over 729K tweets from 4th – 9th November on the following query (#callofdutyblackops3 OR #cod3 OR #nu3town OR #BlackOps3 OR #BlackOpsIII OR #BackInBlack OR #BO3) and identified the top 100 most influential brands and individuals leading the discussion on Twitter. We discovered a very engaged community of gamers, YouTubers, tech enthusiasts, celebrities and brands all chatting about the game. Below you can see a network map of the online conversation created with our Influencer Relationship Management software IRM. This map shows Call of Duty’s official Twitter Handle at the centre, and the conversations to and from the influencers in its field. 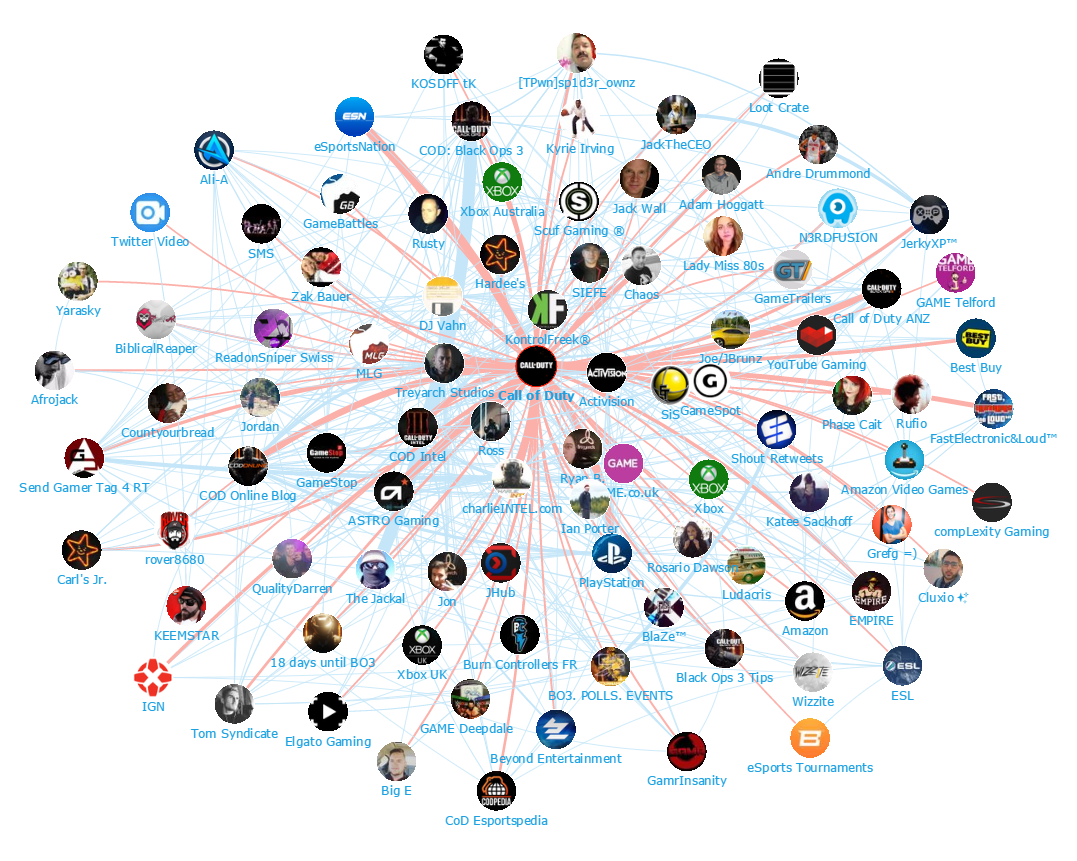 Below you can see another network map created in IRM (Influencer Relationship Management software) showing the #4 influencer YouTuber Ali-A at the centre, and the conversations to and from the different influencers in its field. As you can see it is a very engaged community with many conversations. If you are interested in learning more about identifying, managing and engaging with influencers click here to get in touch! 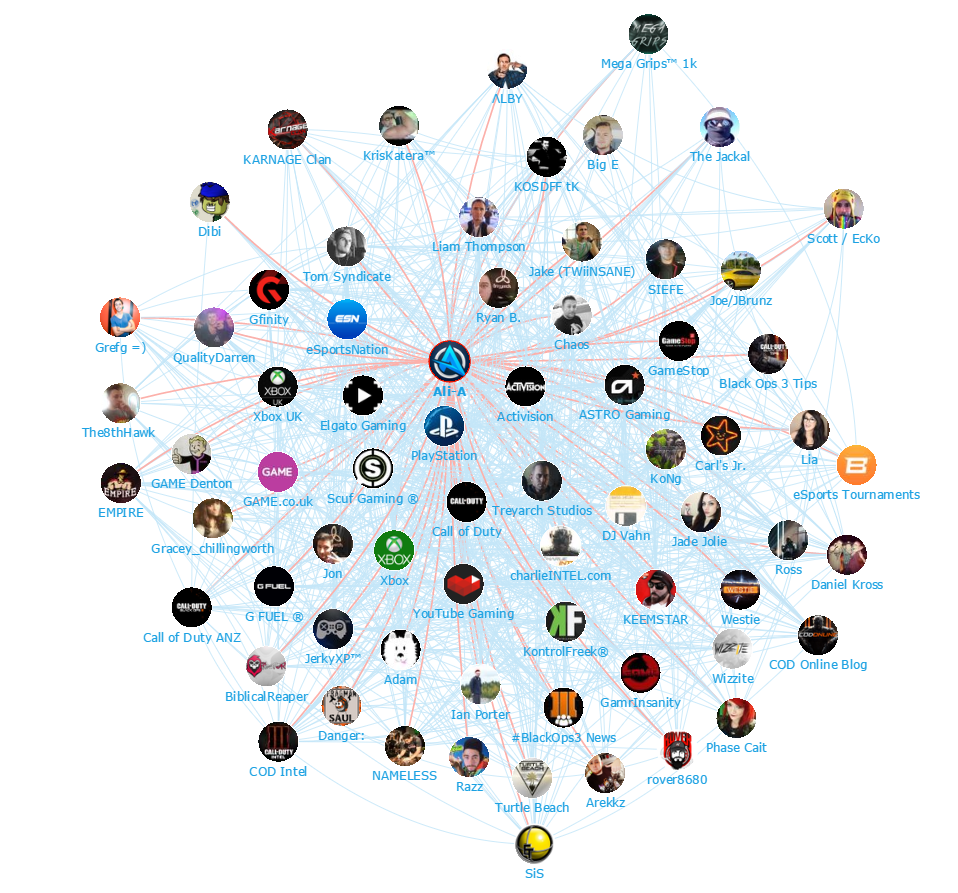 It was interesting to see how the volume of posts around the game changed over time. There was a significant spike on the day of release, followed by a steady decrease in conversation over the next 3 days: 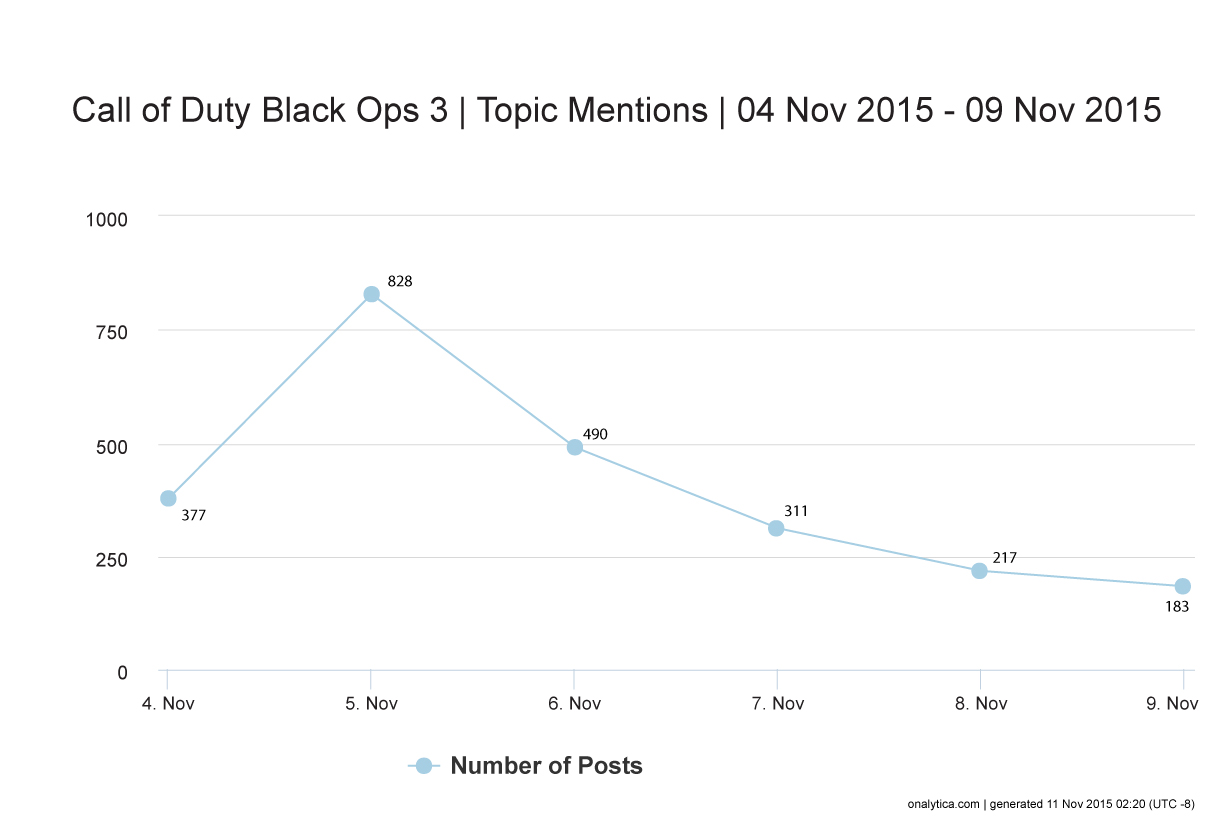 Brands dominated the conversation with a 69% share of voice: 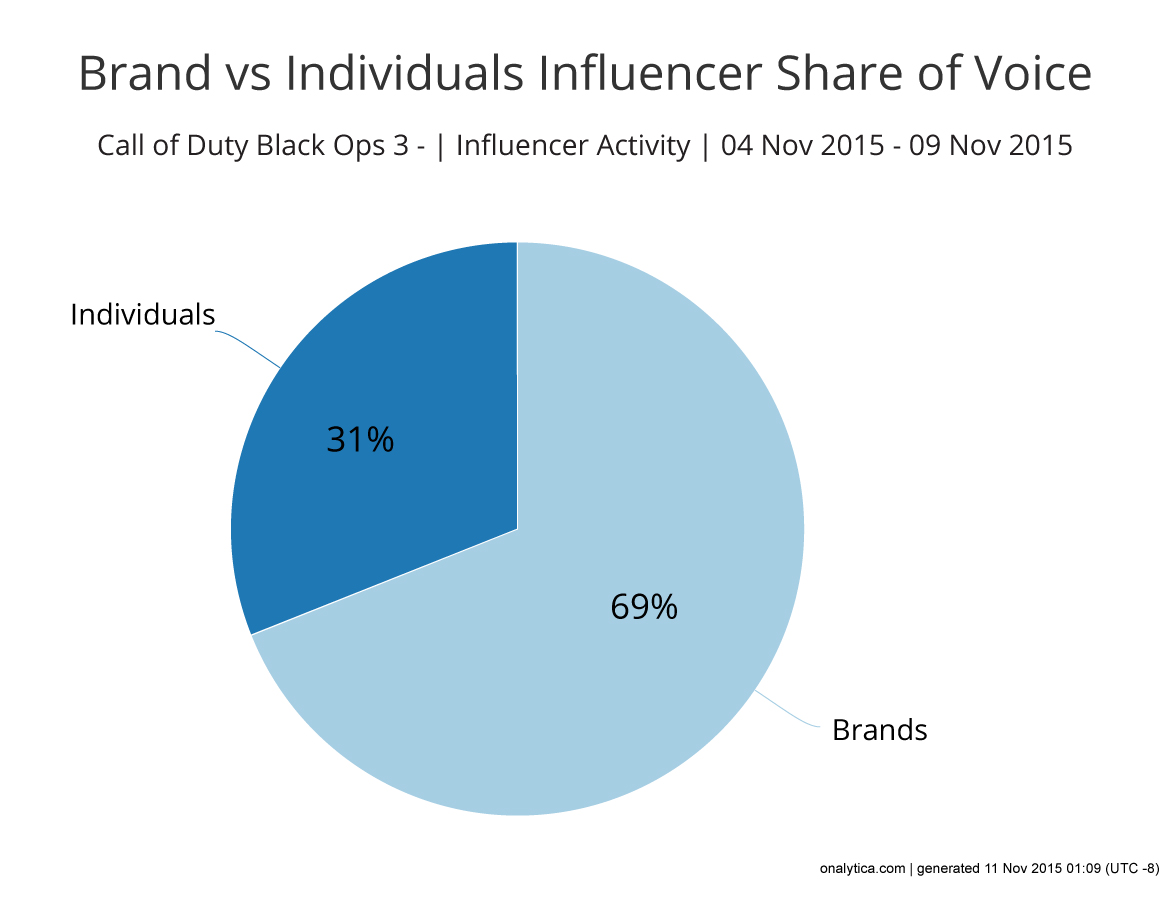 With all the discussion and resources available online, our analysis produced a great set of independent influencers and communities. Be sure to hit the download button below to grab the full report and see who ranks beyond the top 50.

We looked at all the brands engaging on Twitter to bring you a list of the top 100 most influential individuals during the Call of Duty Black Ops III release. Be sure to hit the download button below to grab the full report and see who ranks beyond the top 50.

REQUEST A FREE DEMO
Disclaimer: As ever with these lists, it must be stressed that the ranking is by no means a definitive measurement of influence, as there is no such thing. The brands and individuals listed are undoubtedly influential when it comes to driving discussion around the Call of Duty Black Ops II release. The PageRank based methodology we use to extract influencers on a particular topic takes into account the number and quality of contextual references that a user receives. These calculations are independent of a users number of followers, but we do filter our lists based on how much a user is engaged in the conversation and the influence they drive through their networks.