Sponsors at the Rio 2016 Olympics: Top 100 Influencers and Brands

The Olympics is a momentous event, historically uniting the world and evoking competitive streaks amongst even the most timid since 776 BC in Athens. Given that it only happens every 4 years, the excitement pre, during and post is overwhelming across social media. You don’t even have to be sporty, or understand the rules of the events to watch and pay an interest; a mere sudden wave of patriotism will usually suffice. Whether you’re an avid fan of watching track and field events, anything on a bike, or involving a pool; there’s something for everyone. The Rio 2016 Olympics saw some historic moments such as Team GB coming 2nd, in front of China with 67 medals in total; Laura Trott becoming the most successful British Female Olympian in history; Usain Bolt achieving his ‘trippe-tripple’, and Mo Farah with his ‘double-double’. The Olympics isn’t just a time for the ordinary 9-5 worker to enjoy; brands jump at the opportunity to be associated with such an event. With this said, we thought it would be really interesting to do some research and analysis into who the top 100 brands and influencers were, in the discussion of the Olympics in relation to the sponsors: 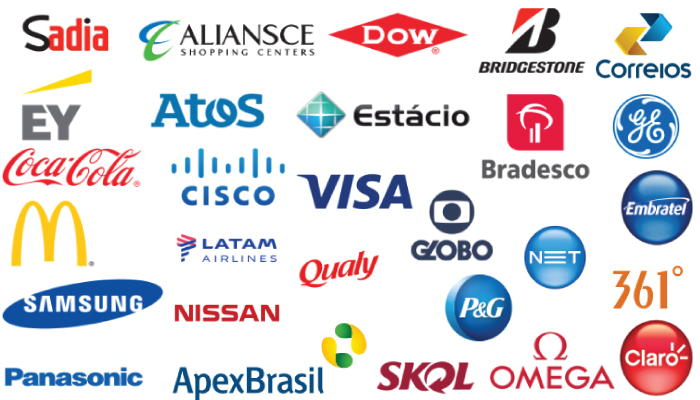 We were interested in seeing which sponsors were spoken of the most, in the context of the Rio 2016 Olympics, so we analysed the top 100 influencers’ tweets and blogs from 7th August –  29th August 2016 and the number of times in which each brand was mentioned, in association with the Olympics. To demonstrate this we have created a share of voice pie chart, with the top 10 brands. 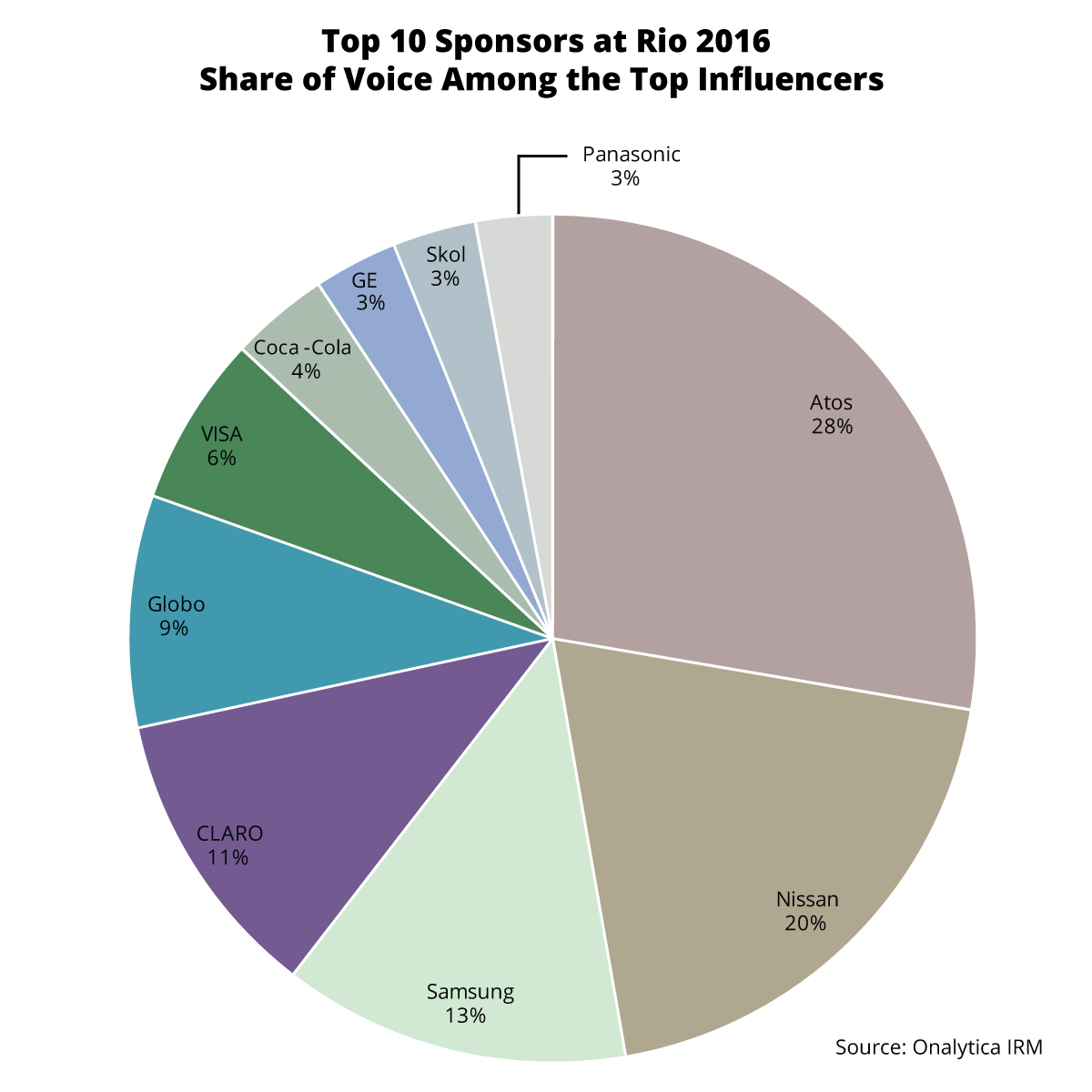 At #1 is the IT services corporation Atos with an impressive 28% share of voice, behind them at #2 with a considerable gap is the car manufacturer Nissan with 20%, followed by the tech giant Samsung at #3 with a 13% share of voice. The telecom company Claro was at #4 with 11% and the mass media group Globo in #5 with 9%. Visa was at #6 with a 6% share of voice, Coca-Cola were #7 with 4% and GE, Skol and Panasonic finish at joint #8 with 3%each.

With the Olympics now being behind us, we’ve got some YouTube ads below, to light that nostalgic Olympic flame inside you. YouTube offered many companies the option to get their videos out in advance with the aim of ensuring more views during the barrage of the Olympics itself. The top trending ads on YouTube based on views (as of 6th Sept) were:

We were very interested in seeing which brand and individuals were leading the discussion around the official Olympic hashtag #Rio2016, whilst mentioning the sponsors, so we analysed  tweets over the time frame of the Olympic tournament, mentioning the key words: (Rio2016 OR Olympics) AND (Coca-Cola OR Atos OR Bridgestone OR Dow OR GE OR Macdonalds OR Omega OR Panasonic OR P&G OR Samsung OR VISA OR Bradesco OR Correios OR CLARO OR Embratel OR Nissan OR Aliansce OR ApexBrasil OR Cisco OR Estácio OR EY OR Globo OR Sadia OR Qualy OR Skol OR Latam OR 361). We then identified the top 100 most influential brands and individuals leading the discussion on Twitter. What we discovered was a very engaged community, with much discussion between individuals and brands- as you’d expect with such a momentous event. Below you can see a network map of the online conversation with the the #1 influencer Usain Bolt at the centre. This map was created with our Influencer Relationship Management software (IRM). Be sure to click on the map to enjoy the full size network diagram in greater detail. 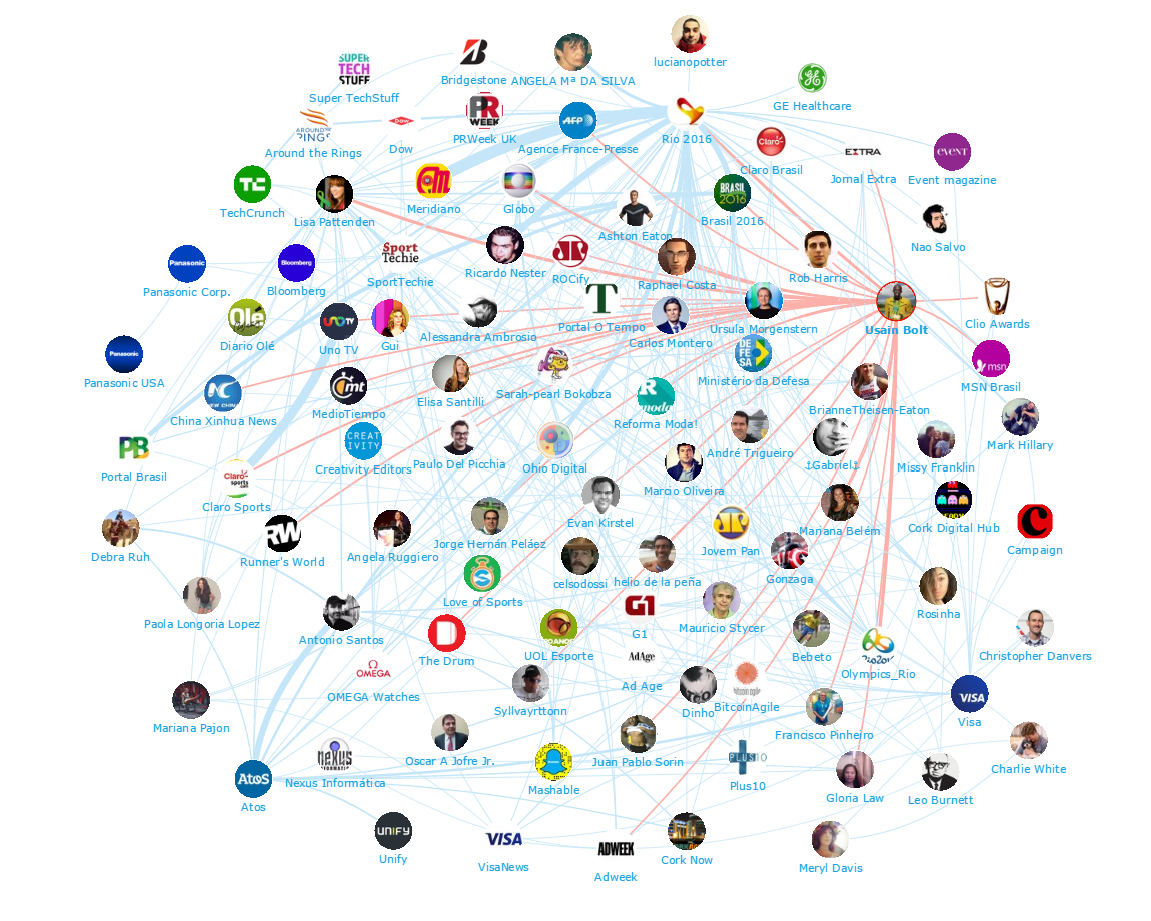 Below you can see another network map created with our Influencer Relationship Management software (IRM) showing the number #19  brand Atos at the centre and all the conversations to and from the influencers in their field. If you are interested in learning more about identifying, managing and engaging with influencers click here to get in touch! 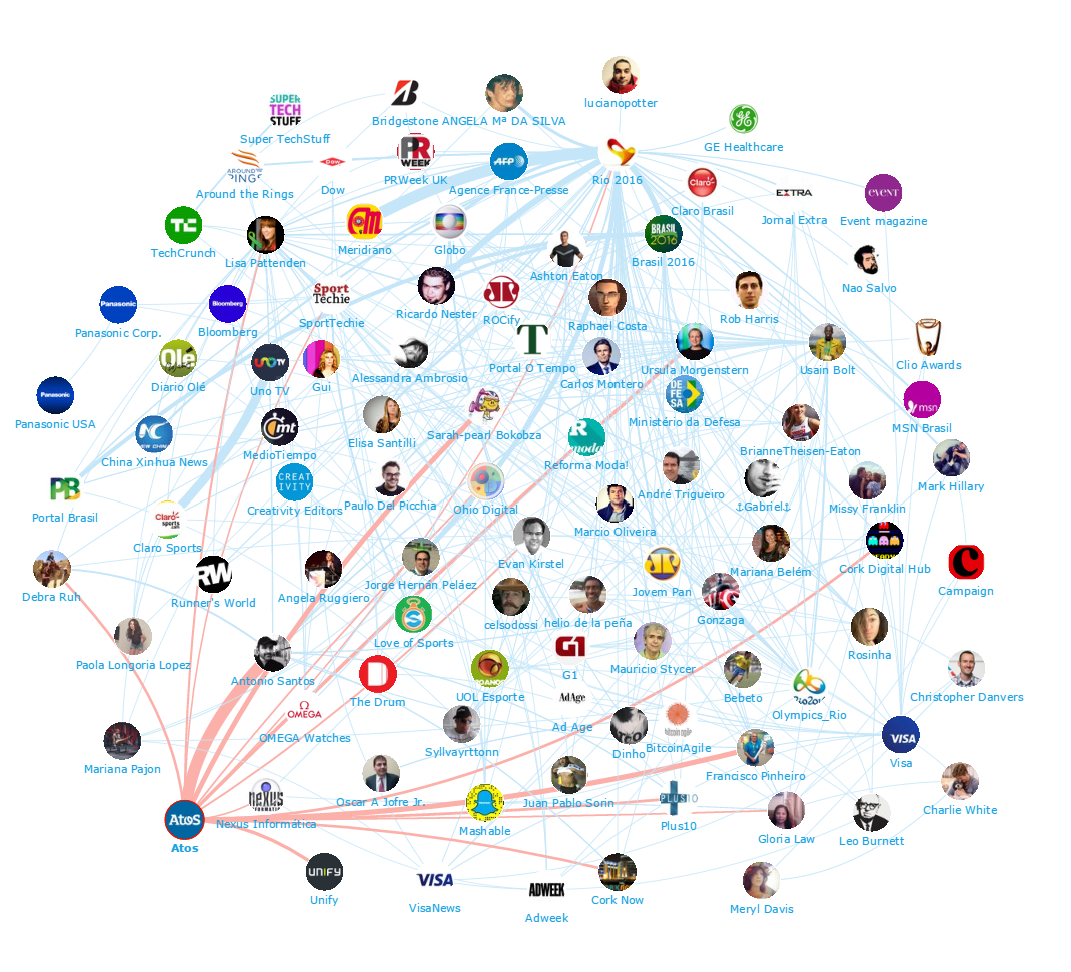 We looked at all the individuals engaging on Twitter to bring you a list of the top influencers around the Rio 2016 Olympics. Below is the top 50, if you want to see who ranks from 50-100 be sure to download the full report by clicking the download button below.

We also looked at all the brands  engaging on Twitter to bring you a list of the top brands talking around the Rio 2016 Olympics. Below is the top 50, if you want to see who ranks from 50-100 be sure to download the report to get the full top 100 list, and see who are most the influential brands in data security.

Disclaimer: As ever with these lists, it must be stressed that the ranking is by no means a definitive measurement of influence, as there is no such thing. The brands and individuals listed are undoubtedly influential when it comes to driving discussion around the Rio2016 Sponsors.

SPONSORS AT THE RIO 2016 OLYMPICS: