Mobile World Congress (MWC) 2016 took place in Barcelona from 27th Feb – 2nd March 2016. More than 2,200 companies attended, exhibiting their new products aimed at transforming our personal and working lives. We saw a number of major announcements from top brands not just in the mobile sector, but in other areas as well including virtual reality, app ideas, 3D printing, privacy protection and backend solutions.

This is what some of the top influencers had to say about the event:

“At MWC, the trend from the last few years continued: the event is becoming less about flagship mobile devices, and more about emerging tech trends. Beautiful, aggressively-priced mid-range phones from China; Huawei preparing to bulldoze its way into the Western market; and awesome VR demos all over the place. These trends may not quite crystalise this year, but certainly within the next 24 months. There were also more suited attendees this year, indicating that more B2B dealings were being conducted behind closed doors – unsurprising, given the continued explosion in mobile device ownership, and thus the required increase in network capacity and other corollary services. People forget that that’s where Huawei, Nokia, and these other giants make most of their money: selling networking equipment to carriers.”

“Sometimes social media is perceived as a distraction – it’s the complete opposite for me. I get to speak directly to employees, peers and the world at large, and see what they’re saying as well. It’s far too easy to operate in a vacuum as a leader – so many meetings, so little time. Even with just a few minutes online, I can both show my personal side and my pride in what we do at Ericsson. That investment is invaluable for the modern leader.”

We were keen to see which brands and individuals were leading the online discussion at MWC 2016. So we analysed 731K+ tweets from 22 February – 3 March 2016 mentioning the keywords “MWC16 OR MWC 16 OR MWC2016 OR MWC 2016 OR MWC” and identified the top 100 most influential brands and individuals leading the discussion on Twitter. What we discovered was a very engaged community, with much discussion between individuals and brands. Below you can see a network map of the top 100 engaged users in the MWC 2016 conversation. This map was created with our Influencer Relationship Management software (IRM). Be sure to click on the map to enjoy the full size network diagram in greater detail. 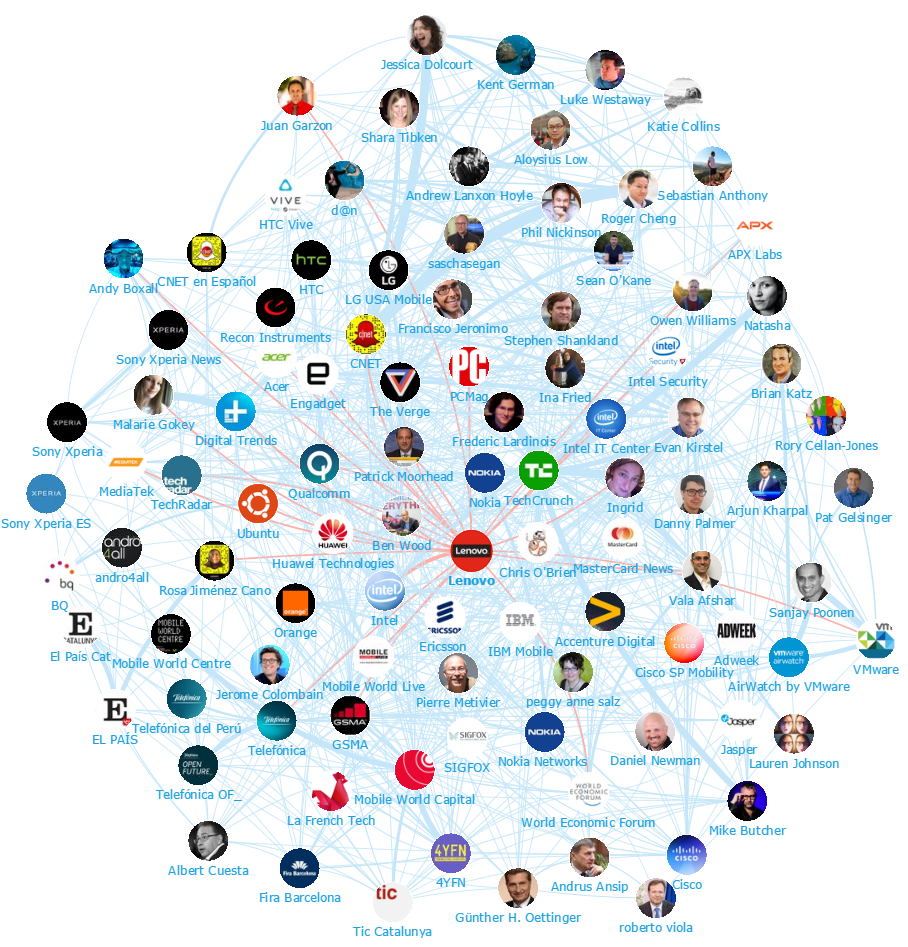 Below you can see another network map created with our Influencer Relationship Management software (IRM) showing the #1 Brand Grupe Spécial Mobile Association, and the conversations to and from the different influencers in their field. If you are interested in learning more about identifying, managing and engaging with influencers click here to get in touch! 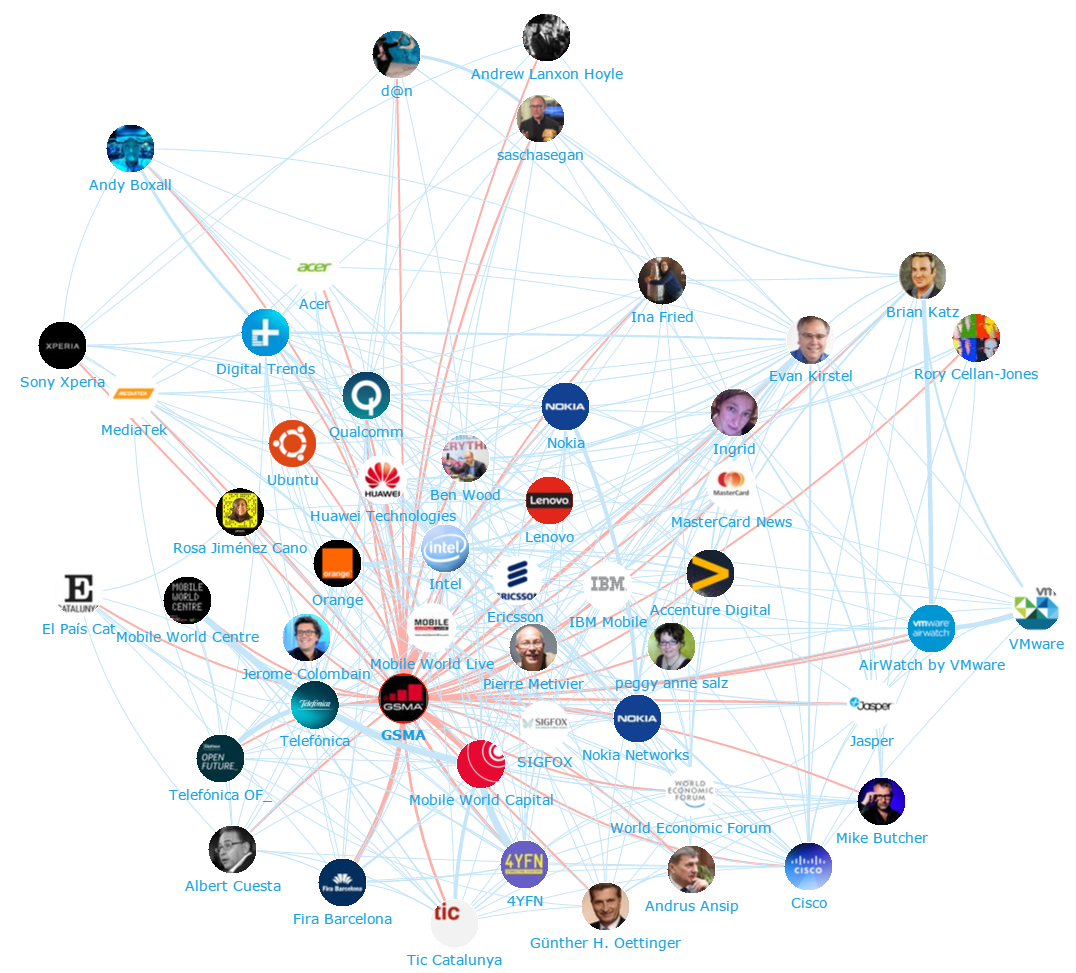 We looked at all the individuals engaging on Twitter to bring you a list of the top 100 most influential individuals at MWC 2016. Be sure to download the report to see who ranked beyond 50 on the list.

In the top 100 brands we found a great selection of organisations such as GSMA, Lenovo, Intel DOit Apps and Qualcomm as well as some top industry resources such as Verge, Pew Research and CNET. Be sure to download the full report to see who ranked from 50-100.

WHICH PRODUCTS AND BRANDS RECEIVED THE MOST ATTENTION?

After identifying the top 100 individuals and brands at MWC 2016, we then went on to analyse their tweets and blogs to gain a measure of which brands and products were receiving the largest share of voice among the top influencers. Here’s what we found: 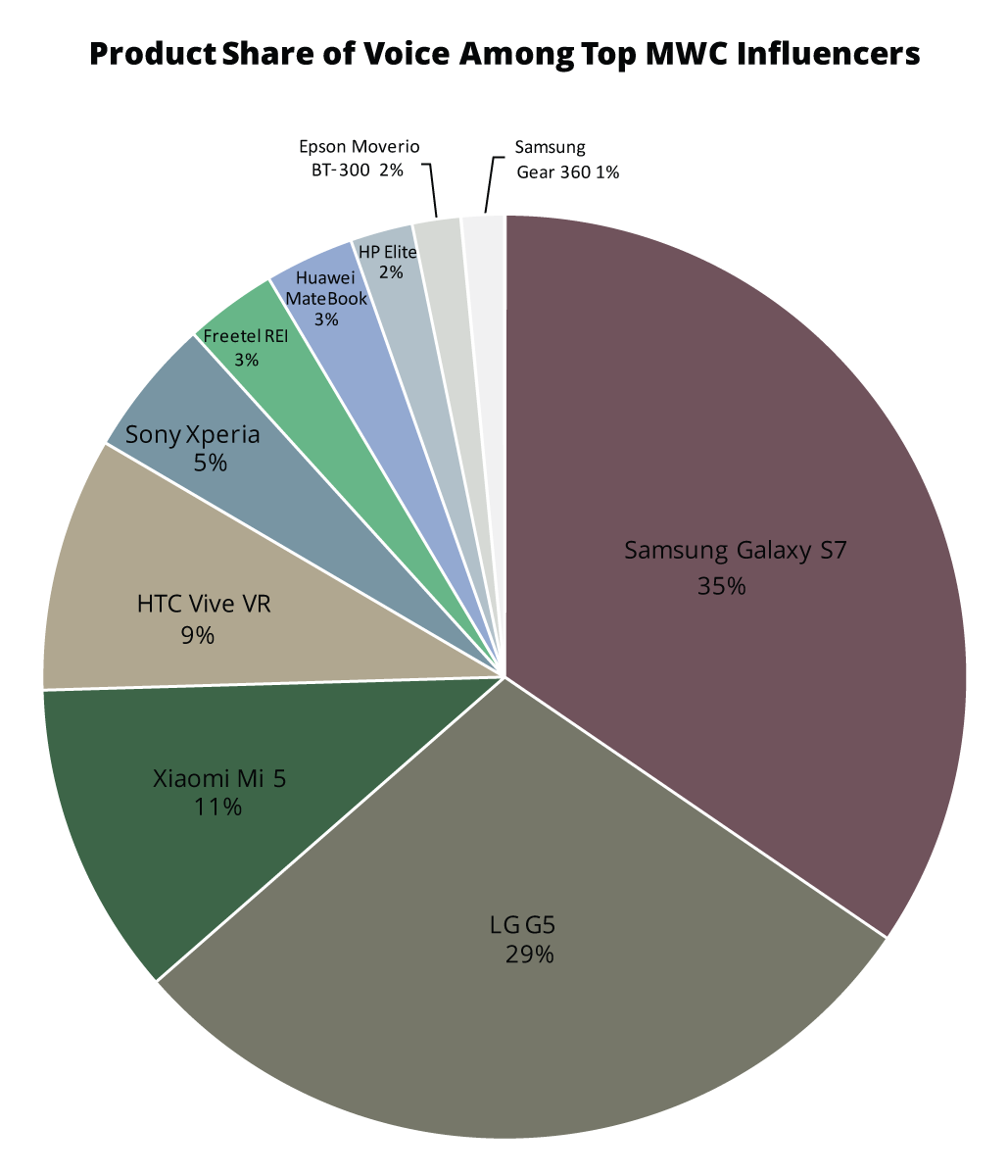 Out of the top 10 products being spoken about by the top influencers at MWC, the top 3 were phones (Samsung’s Galaxy, LG’s G5 and Xiaomi Mi 5). The 4th highest share of voice went to HTC’s Vive VR highend headset. 2 more smartphones followed with Sony’s Experia range and Freetel’s REI. The Huawei Mate Book led the way out of the tablet / laptop hybrid devices followed by the HP Elite laptop. Epson’s Moverio smart glasses received a 2% share of voice among the top influencers followed by Samsung’s Gear 360 camera. 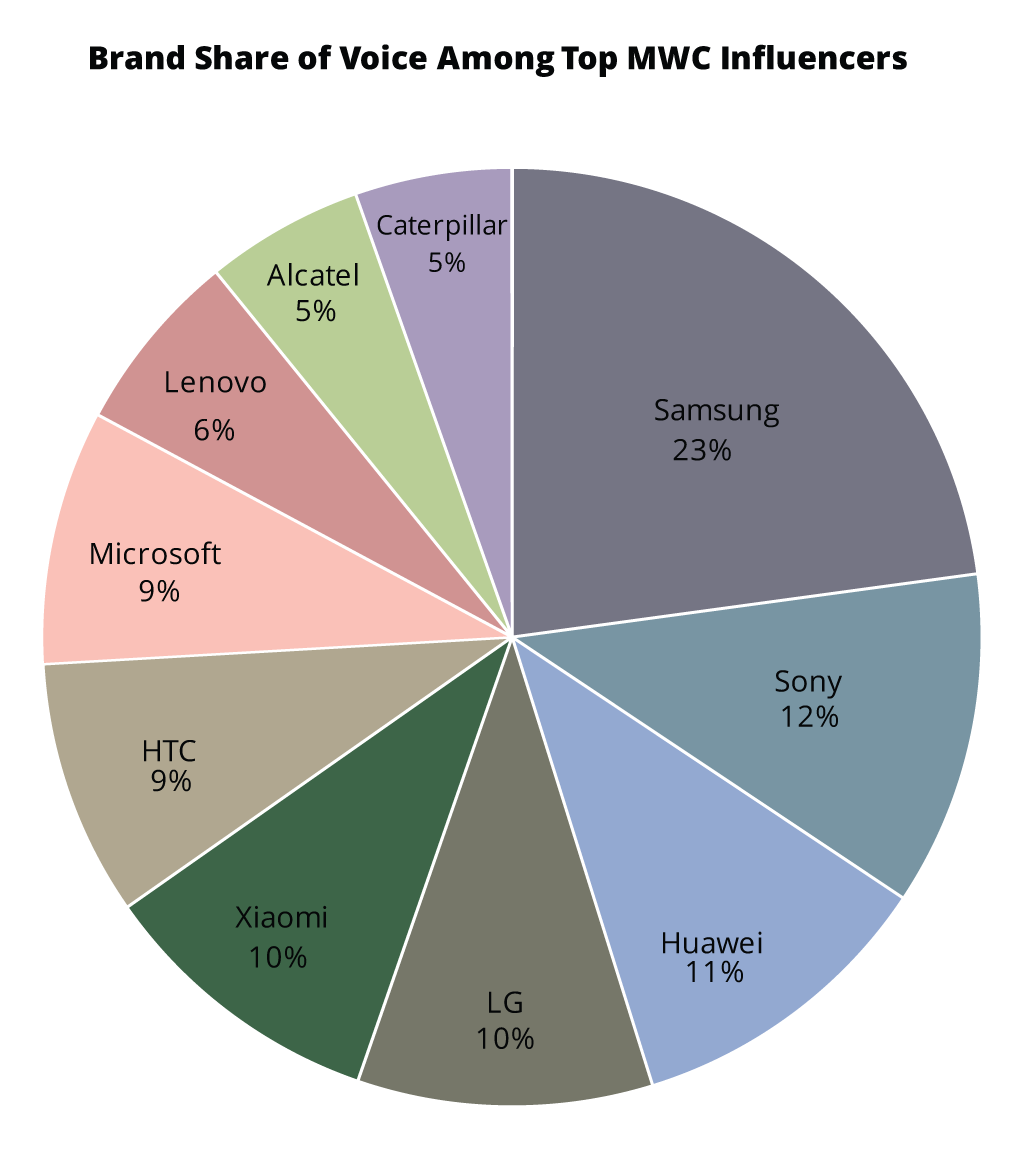 Samsung was again at the top, receiving the most mentions from the top influencers at MWC. Sony received the 2nd highest share of voice, followed by Huawei, LG and Xiaomi. It’s interesting to see Microsoft and HTC both receiving the same share of attention among the influencers, followed by Lenovo, Alcatel and new comers Catapillar who excited audiences with their integrated thermal camera.

At Onalytica we love building these lists and want to give back to our loyal readers as much as we can. If you’re interested in other topics (such as Open Source, Social Selling, IoT) be sure to have a gander on our blog or why not propose some topics to us on twitter? We also build some very cool software to manage all of these influencers. Get a free demo today by clicking the button below!

Disclaimer: As ever with these lists, it must be stressed that the ranking is by no means a definitive measurement of influence, as there is no such thing. The brands and individuals listed are undoubtedly influential when it comes to driving discussion around MWC 2016.