#ad – Lucrative for Celebrities, What About the Brands?

Whether you’re a social media addict compelled to share picturesque sunsets and Tumblr worthy salads, or you’re partial to the standard social media check during your daily commute, you’re bound to have noticed the rise in sponsored posts on anything from the latest teeth whitening set to the current protein shake fad or must-have fashion accessory.  In theory, a very efficient and effective means of achieving direct marketing. Now, whilst some may be happy to recommend a product to their copious followers just for a freebie, or because they genuinely like the product, many actually do so because it pays well- very well. The Economist recently published an article entitled: ‘Celebrities’ endorsement earnings on social media‘, in which they shared average earnings across different social media channels, relative to their follower count. This intelligence gives brands insight into which platforms they can work with influencers on; the most expensive channels and perhaps therefore the most effective. 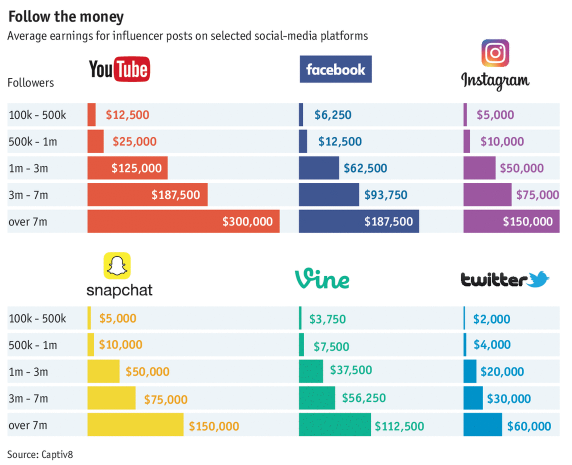 WHAT DOES THE DATA SAY?

It comes as no surprise that YouTubers, on average, take home the biggest pay-cheques, earning over $300,000 with 7+ Million followers. Aside from YouTube videos requiring the most effort and creativity, this may well be down to the fact that the biggest YouTubers for the most part, have grown their following steadily over a very long period of time and have therefore gained their audience’s trust. Take the standard example of Zoella; to many her fame has sky rocketed to a combined YouTube following of almost 16 Million followers over-night, whereas in reality, it has taken her 7 years to get to where she is today- no mean feat. You have to consciously decide to engage with a YouTubers’ content, meaning you’re already in a trusting, receptive position as an audience member. Therefore, when a video you happened to want to watch anyway, has ‘#ad’ in the title, this is less likely to offend the viewer. Compare this to scrolling through Instagram, where you’re usually subjected to adverts by those you follow without choice- hence, perhaps, the lower pay rate for Instagram. Similarly, Twitter, the least lucrative channel for social media stars, is perhaps so, because of the high volume of tweets posted (500 million + per day), therefore meaning your ad may get lost. In addition to this, Twitter, similarly to Facebook and Snapchat is more of a supporting channel to individuals that have risen to fame through YouTube, Instagram, Vine or through being a ‘conventional’ celebrity.

ARE CELEBRITY ENDORSEMENTS THE WAY FORWARD?

Whilst celebrities are getting a very good deal with endorsing products, this doesn’t always guarantee more sales and ROI for the brand- which is the core aim. The reason being, if you look deeper at the types of influencers endorsing products and the frequency at which they’re doing so, the value diminishes, as their followers may just think ‘oh just another #ad’. After all, why should consumers have complete trust in an opinion that has been paid for? Examples of this are your reality TV stars from programmes such as: Made in Chelsea & Geordie Shore- not known to shy away from endorsements of products such as Bootea, Coco White and Protein World. Whilst the followers of such people may admire them, this doesn’t necessarily mean that they’re influenced by them, simply because there may be a lack of trust in the authenticity of their posts.

SHIFTING THE FOCUS TO ‘MICRO INFLUENCERS’

It is imperative for brands to carefully consider the individuals they wish to work with in order to reap the financial success. The answer to this is often the ‘Micro-Influencer’.  A Micro Influencer is as the name would suggest, an influencer that doesn’t necessarily have a huge following compared to the likes of the Kardashians, but they’re extremely relevant and influential within a particular field. Brands can develop real, organic relationships with influencers, enabling access to a select group of followers that are ready to listen. Whilst a monetary agreement may work well for some brands, this can come at the cost of consumers’ trust- as a brand you need to think, is this worth the risk? When working with influencers, it is fundamental to be in a mind set in which you set out to benefit three parties: the influencer, the brand and the consumer- the latter element often overlooked as brands get distracted with follower numbers and social status. At a recent event of ours, Under the Influence , Philip Trippenbach, Head of Influencer at Edelman, shared his thoughts on this topic and said: “If you’re an SME and you make candles, why would it be good for Zoella to have your candles in her videos? She has 10 million followers, but are they the candle buying sort?”. It is very easy to see a big following number and therefore assume that you need them to mention your brand, but really at the forefront of your mind you need to ask yourself:  Is the alignment there? Are their followers going to be interested in buying our product/service? Are they in the financial position to buy our product?
If you’re interested in finding niche micro influencers relevant to your brand, get in touch here. Or click here to jump on a free trial!